This month marks the 20th anniversary of the end of apartheid in South Africa. Legendary photographer Grant Fleming recalls those heady days of freedom 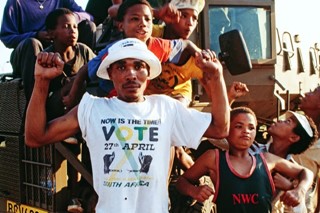 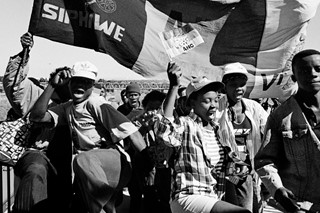 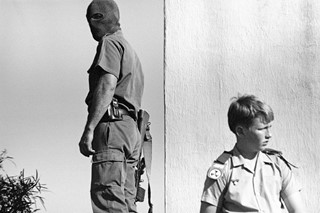 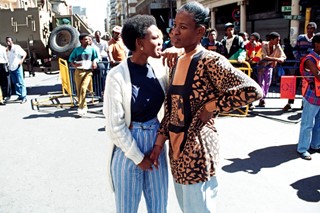 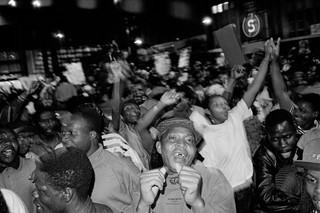 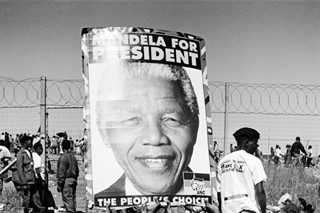 This Sunday marks twenty years since Nelson Mandela was elected in South Africa and the horror that was apartheid officially ended. Grant Fleming, the East End's purveyor of truth in foreign lands, was there to capture South Africa's definitive moment of freedom, including one shot of Mandela taken on the eve of the pivotal election.

"I got a beautiful picture of him smiling," Fleming recalls, "the most gorgeous smile ever. The aura in that room was so special, his presence alone possesses an otherworldliness – he makes you feel so special. I phoned my girlfriend and cried so much that she thought I'd been shot."

Fleming is no stranger to confrontation abroad. He's been kidnapped in Somalia, held at gunpoint in El Salvador and battled with rival firms during his days as a member of West Ham's firm. His exhibition, The End Of Apartheid, opens tomorrow to coincide with the passing of two decades since Mandela's victory. 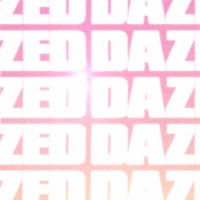 Dazed Digital: What took you to South Africa?

Grant Fleming: I was a member of London anti-apartheid for many years, from around the mid-80s and got quite involved in campaigning. Then I started to work with the Red Wedge, which was a cultural offshoot of the Labour party in the 80s. After being involved in so much protest over here and feeling very close and quite involved in the struggle meant that I just had to be there when this disgusting ideology was put in a coffin and buried forever. So I jumped off a Primal Scream tour I was on and took a plane south in time for the elections.

DD: What was the atmosphere like during anti-apartheid protests in London?

Grant Fleming: Listen, up to her dying day Thatcher called Mandela a terrorist – she and the Tories thought the ANC were a bunch of lawless natives. During that period, the police were being manipulated into becoming her little foot-soldiers. There were occasions when they attacked and tried to break up marches. Generally though, the campaign itself was nonviolent. We'd go into supermarkets, fill up trolleys with South African goods and occupy every checkout. They go to scan each item and you’d go "”ang on is that South African? Oh I don’t want that, can you put that to one side?" The activist occupying the next aisle is doing it, the next person’s doing it, holding up the tills so no-one else can get served. Customers start walking out and complaining. That makes a difference in a world that’s all about constant profits.

DD: Just how important was the end of apartheid to the 20th century?

Grant Fleming: The defining moment. The ultimate game–changer. The emancipation of a whole race of people in a country, that then influenced and inspired the whole continent and on and on around the world. Surely, we could never fall so far behind again as human beings, could we? To just discriminate on the basis of the colour of someone’s skin. Of course people do, and racism will never disappear, unfortunately it seems to be a part of some people’s DNA. For the majority, the rest of us – we do have a duty to make sure this shit never happens again. Ever.

DD: What was the atmosphere in South Africa in the days before the election?

Grant Fleming: People were concerned that the place was just gonna fucking explode. Here and there it did, but thankfully the bloodbath that so many (including myself) were scared of happening, didn't. All thanks goes to Mandela for this, without him I'm 100% sure it would have been carnage. There was genuine concern though that the whites on the far-right were going to rise up and go out fighting. I was at a meeting of the AWB (an Afrikaans separatist group) who declared war on the ANC and engaged with the South African army in a shoot-out. About 30 got killed. Others from that crowd were bombing different places, I drove into one in central Johannesburg that shook the car; another quarter of a mile earlier and we’ve been blown to smithereens. The IFP (Zulu party) were practically at war in some townships with the ANC – we drove through one battle in Thokoza that was like a video game. They were firing at each other from behind wrecked buildings. On seeing the cameras we had, they waved us through this roadblock. We got to the other side and they just started firing up at each other again. Once the elections started, though, it was just joy, relief.

DD: How did the atmosphere change after Mandela was elected?

Grant Fleming: To an extent, it was over already. The racists were fantasists thinking that it was going to turn out any different. A black man was in power now, elected democratically. But there was still trouble. That declaration of war by Terreblanche (a white nationalist leader) and the Nazis... They rode through this town in this big parade with flags, like Nuremburg but on a smaller scale. To see that in the modern age, I thought, “Wow! This is insane!” I got attacked on a farm when we went to meet them. They’d invited people there to report the declaration of war. They hit this black reporter from the New York Post. A young girl photographer crouched down to take pictures, and one of these Afrikaaners just booted her full in the face. She flew past me and before any of us could even react some fella got me by the throat with a machete and started really cussing and threatening, all masked up. Residual tensions definitely remained.

The celebrations outside the ANC Centre were incredible. I was just going around handing out whisky from the official party to people in the street and people were bringing their own drinks, a sound system turned up, people were flying about on top of cars, singing and dancing everywhere. It was fucking unbelievable. A carnival, a rave, just pure elation and the ecstasy of freedom. Up in Hillbrow, a rough neighbourhood, I took the best picture I ever have, and probably will do, in my life (above). I’d kept one cheap little camera in my pocket, and as it’s shot on film, I never knew at the time I’d captured such an iconic image (and being blind drunk didn’t help), but they’d started burning these posters of the national party which threw light onto everyone. In the middle of the dancing I took a picture and this guy is centre-stage in this most amazing, Christ–like repose with the most ecstatic look on his face. It really does sum it up for me. That’s the feeling of the end of apartheid.

DD: How does the memory of apartheid live with you today?

Grant Fleming: Imagine every day of your life being knocked around, beaten and treated as if you were no better than a piece of shit. We can never understand what that was like, and we’re so lucky that we won’t have to find out. But the way those people came through that transition with such dignity, and the joy of seeing them vote, I'm just so privileged to have been there. Forget the pictures, just to have been there and to know that maybe I even contributed a little, in some small way. It’s an incredible feeling that vindicates everything you’ve done. It gives you that sense of purpose that it is worth standing up and going on demos. I was going to more rallies than I was football matches. If you were in Trafalgar Square, there were rallies going on every single Saturday. Maybe we lost the war with Thatcher, but we didn’t lose every battle, did we? Apartheid ended.