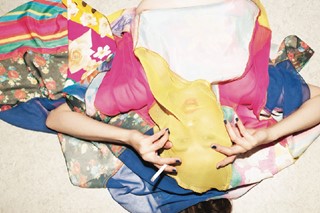 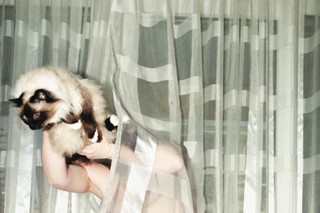 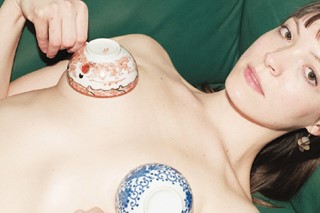 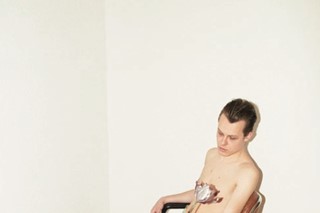 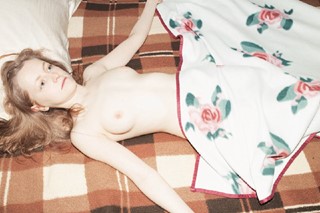 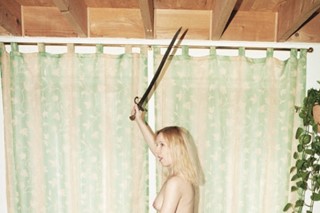 Swiss photographer Dan Cermak has just released a new photography book titled ‘I’ve always wanted to do this’, in which he’s photographed ordinary people, nude and in their own homes with their own belongings. Cermak started this project back in 2009, when he placed adverts in the paper asking for participants and evidently there really are some people without inhibitions as Cermak now has a whole book full of close-ups, portraits, snapshots and staged nude photographs. The series has an air of humour to it, for instance the woman in a suitcase with her limbs hanging out like a tortoise, or a woman 'wearing' a teacup bikini.  But be warned this definitely isn’t the sort of book you should show your Grandma...

Studying photography at the arts university, Zürcher Hochschule der Künste and FAMU Prague, Cermak has since found success in many commercial projects such as magazine covers and ad campaigns but it’s his personal work that really shows where the photographer’s interests lie. Throughout his portfolio he’s continued to push the boundaries, and test the extremes. Here he tells us why pushing the boundaries means he's able to discover things that aren't always visible to us.

Dazed Digital: Why have you always wanted to take nude pictures of people in their homes?
Dan Cermak: When I started the project in 2009 I wondered why would people answer to an ad in the paper asking to be photographed naked at home. Is it narcissism or do the models just want to experience something extreme? So I started to ask my models and the answer to that very often was: "I've always wanted to do this", so that's why this is the title of my book.

DD: What do you want to convey with the book?
Dan Cermak: First I am interessted in human beings. To find out, the purest form of a human being is nudity. You are born without any clothes on and when you die your body will transform into nature again. Once people get undressed in front of the camera they get vulnerable. All the protection of the clothes is gone. I believe the photographs of naked people, if they are not too staged can show intimacy and the pure self of a person.

The work contains many aspects of nudity and differtent kinds of pictures. For the photos I used a very simple camera in order to react fast and spontaneous. All the photographs are a result of the artistic work of me and the model. Different questions came up and had importance to me during the process, like; "Is there a way to photograph nudes and find a different aspect of nude photography?", "What's the difference in photographing a male nude or a female nude (for me as a man)?"

DD: Despite some of the shots being staged, in general a fairly naturalistic look is created, presenting the subjects in their truest form. Why was this important?
Dan Cermak: Of course the photographs are staged to a certain degree, some more, some less. What was important to me is the fact the photographs didn't go into fashion photography (I tried to find different posings of the model) or erotic photography (no sexy looks for example). I also didn't do any retouching on the bodies, because I wanted to have the real thing. I wanted to see all the different shapes of all the different bodies. No tricks.

DD: A few of the shots are more extreme or graphic than others, what reasons were there for you to do only do some portraits like this?
Dan Cermak: I think its just important to have some diversity. That's why I have chosen different aproaches.

DD: In other parts of your personal work, nudity features again as well as a series called ‘Disabled’. Do you like to test boundaries in your work? Is it about shocking people?
Dan Cermak: I am interested in testing boundaries. Because to test boundaries always means to me referring to a part of society that is maybe not so visible. Nudity or porn is part of our visual mind, I mean it's everywhere, but in those pictures all the intimacy is gone. In my new work I am trying to show a part of nudity that is intelligent, ironic, also sexy (sometimes), real, human, funny etc. It means trying to give nudity a face beyond common pictures of big breasted women and muscley men.

DD:What projects have you got coming up?
Dan Cermak: Next year my work will be shown in different shows in Switzerland. Means lot of work, preparing exhibitions...

Dan Cermak's  'I've always wanted to do this' is out now