Meet the indie outsider conquering hearts with her barbed punk missives on love, angst and the tragedy of growing up

With its underdog tale of disapproving mothers and teenage pessimism, Mitski’s “Your Best American Girl” conjures the bone-penetrating nostalgia and accompanying mixed emotions of being lonely in love. “I’ve had more lonely relationships than not,” says the 25-year-old Japanese-American singer. “When you are a minority it’s your job to bend, and when you love someone you really want to make it work. Then you start to realise, ‘Oh, I’m bending a lot,’ and they’re just standing there existing, and I’m bending around them. But you can’t blame them, they don’t realise it, that’s just how they already existed. It’s hard.”

Mitski’s soft-spoken inflections today are in contrast to her beautiful scream on the track, a head-thrashing loser anthem with a gorgeous slow build that burned up the internet in March. In the video for the song, Mitski watches as her “all-American boy” swoons over someone else, someone skinny with blonde hair and a flower crown. In response, she makes out with the back of her hand with admirable gusto. Some have likened it to Weezer (says Mitski, “I would love for Rivers Cuomo to listen to my music and see what he thinks”), though it’s easy to detect a trace of Wheatus’s “Teenage Dirtbag” in its DNA.

“I kind of did that on purpose,” she grins, describing how the noughties power-pop smash speaks to an all-American brand of white suburban angst she could never wholly subscribe to. “I just wanted to use that and play on it, while talking about how I can’t be part of it.” But if Mitski doesn’t fit into the very white, very male culture of indie rock, her music punctures it, seeping into its blood and exposing its frailties.

How 2manydjs made their mash-up masterpiece As Heard on Radio Soulwax Pt. 2As the landmark DJ mix compilation arrives on streaming platforms to mark its 20th anniversary, Dazed speaks to 2manydjs’ David and Stephen Dewaele, Erol Alkan, Peaches, and more
Mitski – Summer 20167 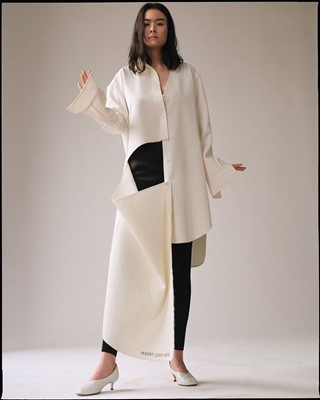 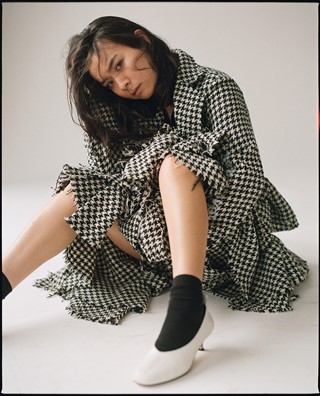 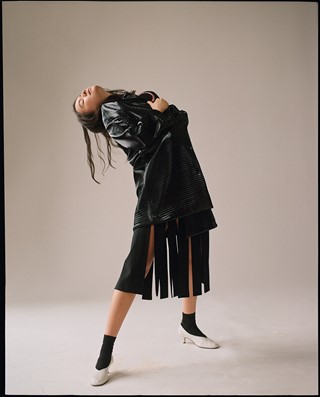 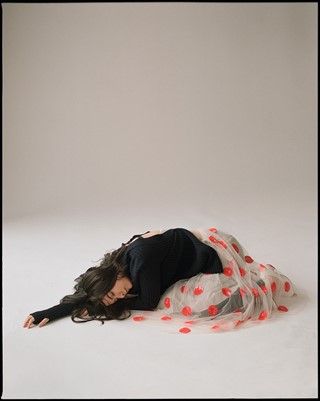 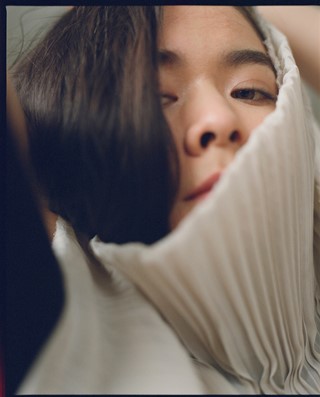 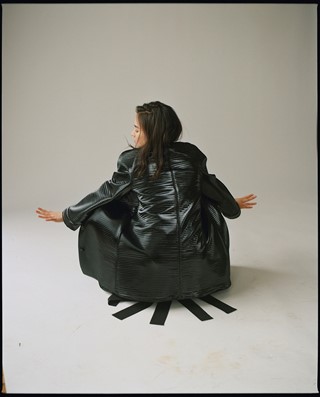 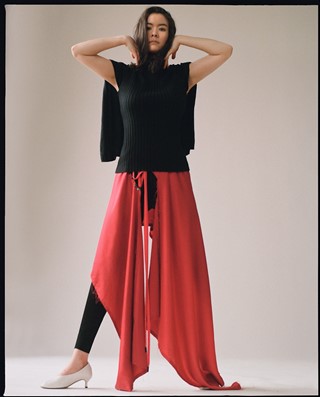 We’re sitting in an east London pub the morning after her sold-out show across town. But the musician born Mitski Miyawaki is used to being on the road. Born in Japan, she grew up in a family that moved frequently, living in locales as diverse as Malaysia, China, Turkey and the Democratic Republic of Congo. Eventually, she settled in New York to study classical composition. “I moved to a different place every year, so I was always the outsider,” she muses, slipping off her trainers and tucking her legs beneath her. “No one would know me, so I got to experiment with identity. I got to be a new person, I got to start over every year.”

Excitement around Mitski’s recent full-length release, Puberty 2, had all the fever-pitch atmosphere of a debut; it might surprise new fans, then, that it’s taken some four albums for her to burst the indie bubble. She started making her own music at the age of 19, which she describes as “really late” for a musician. This is because she didn’t see Asian-Americans like herself reflected in the world of indie rock. “I never expected there to be anyone else like me,” she says, making it clear that she always felt destined to represent herself.

Last night’s audience was surprisingly man-heavy, with one bellowing baritone voice demanding she play “Last Words of a Shooting Star”, from her 2014 record Bury Me at Makeout Creek – a song whose lyrics evoke Sylvia Plath in their feminine malaise (“They’ll never know how I’d stared at the dark in that room / with no thoughts”). The reason for the boy-girl ratio, she thinks, is because British fans don’t yet understand that the space she holds is “not necessarily for men”

In fact, most of her fans are teenage girls, thousands of them clinging to her every tweet (even – and especially – the ones about her cats). But Mitski isn’t writing for anyone other than herself. “When I’m in the process of writing I don’t have the mental space to think about anyone else,” she says. “It’s all about me.” Perhaps this is why smart, emotional and occasionally anxious young women – girls who are witty on the internet and wish they could be as witty in person – relate to her music. Vividly mapping the small triumphs and shattering comedowns of millennial love and life, Mitski has nothing to hide (aside from her love of Jeff Buckley, as a recent tweet put it, “bc I don’t want sophomores playing guitar on the quad who mansplain beat poetry to think I’m one of them.”)

Among the female musicians who inspire her, Mitski lists Sheena Ringo, Björk, M.I.A. and... Mariah. “All I want to do at karaoke is sing Mariah Carey,” she says. “I can hear a vocal riff without any lyrics and know exactly what song it’s from.” Mitski’s love of pop might seem at odds with the lo-fi guitar music she makes, but it’s the stuff she grew up on. “The music I listened to was Top 40. I didn’t have any exposure to indie.” Moving around as a teenager wasn’t conducive to being part of any kind of subculture: “I just got there, adapted to the best of my ability, and left.”

There are pros and cons to being adaptable. “You are good at getting to know people, being in the present, being friendly, but you never actually open up or allow people in,” she says, describing the impossibility of projecting a shiny public persona without having to protect her more vulnerable parts. “Maybe that’s why I’m a musician.”

“When you’re an adult, things mellow out. I think when you’re a teenager and you are sad and the world is ending, everything is about that one sadness” — Mitski Miyawaki

With her outsider narratives of romantic encounters cruelly cut short and memories tinged with regret, there’s a youthful intensity to Mitski’s music. Thematically, her lyrics circle “feeling like I’m not good enough” and “feeling like the world is beautiful”; but in the context of the social anxiety of one’s 20s, their wide-eyed naivety verges on the ominous. On “Happy”, the second single from Puberty 2, she recounts a visit from happiness, who brings her cookies – but reading between the sing-song lines it’s clear he’s more fuckboy than teddy bear. “When you’re an adult, things mellow out,” she says. “I think when you’re a teenager and you are sad and the world is ending, everything is about that one sadness.” She describes the “convenient and inconvenient” thing about herself as her “photographic” emotional memory – which can prove useful as a songwriter, but exhausting as a person. (“I don’t forgive, because it’s just so fresh, all the time.”)

Between her tweets and her lyrics, Mitski echoes the Shanghai-born, New York-based poet and essayist Jenny Zhang, whose writing on love, sex, guts and diaspora is heart-burstingly tender and eye-wateringly gory in equal parts. I ask if she’s read “Far Away From Me”, Zhang’s essay on cultural belonging via the lyrics of Weezer. She has, and, unable to resist, I pull a dog-eared copy of Dear Jenny, We Are All Find from my bag; it turns out that the two are friends who performed together recently. “The metaphors are physical,” says Mitski of Zhang’s work, which shares her penchant for graphic imagery (see Mitski’s declaration that she wants a love that “falls as fast as a body from a balcony” on “Townie”.) “People have made that comparison before, so that’s how I checked her out.”

Another east Asian inspiration is Hayao Miyazaki, whose movies she credits as shaping her view of the world. “Just thinking about what I would do if I ever met him makes me start crying,” she says. “I love him so much.” Princess Mononoke and Nausicaä of the Valley of the Wind are the ones she turns to when she feels down or confused, because “Nausicaä and San (AKA Princess Mononoke) are two characters I want to be like. I know I could never be them, because they’re so good, and so strong, and also very decisive and committed to something.” But the calm in the eye of Mitski’s storm of feeling suggests otherwise. On Puberty 2’s final track, “A Burning Hill”, she is as vulnerable, introspective and as capable of defending her particular, peculiar brand of sisterhood as any Studio Ghibli heroine. “I’ve been a forest fire / I am a forest fire / and I am the fire, and I am the forest, and I am a witness watching it.”

Puberty 2 was released on June 17