Larry B is used to being seen. Even dressed all in black (“I’m going through a kind of casual phase at the moment”) on a main street in Dalston, he’s striking. If you had to peg his look, you’d say it was a kind of Dennis Rodman-meets-regal African auntie, but today his slim, statuesque frame is elegant in skintight jeans and a hoodie. He’s softly spoken and shy, which makes him warm and immediately likable.

The 25-year-old British Ghanaian DJ and producer (the ‘B’ stands for Boakye) is fresh from his tour with queer-rap icon Mykki Blanco, who he considers family. When we meet, I tell him that I first saw him play at a club called Concrete a few years ago, and he quizzes me on what his hair was like at the time – blonde? Shaved? Dreads? You get the sense that things move fast in Larry’s world. A lynchpin of the London club scene, he is celebrated for his fiercely original mixes, and recently became a muse to acclaimed designer Grace Wales Bonner. Larry B is single-handedly rewriting the idea that if you’re gay, black and from south London, you’re not visible.

Tonight, all eyes in Tesco are on his 6’2” frame as he buys some Wine Gums and a few cans of gin and tonic. He regales me with stories from a recent trip DJing in Japan (“the boys were so femme and fierce”), and reminisces about the London suburb he grew up in. “In my school in South Norwood, all the boys were in the playground playing grime out of their phones,” he says. “But I was never a ‘spitting bars’ person. I used to sing.” 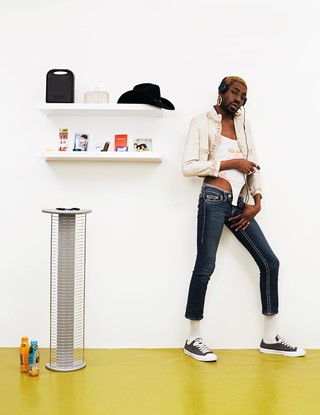 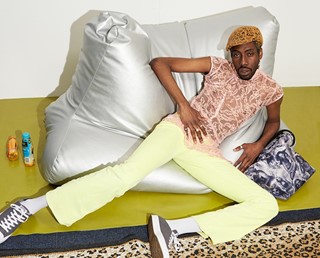 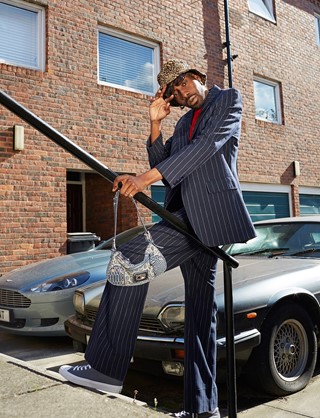 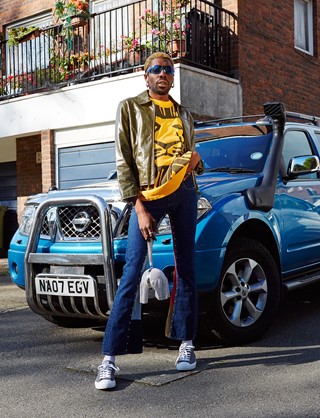 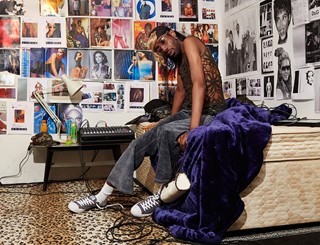 A singer in a playground full of rappers is a fitting image for a guy who’s unfazed by his surroundings, and even now, Larry’s music makes you do a double take. His refixes of R&B classics are unswerving in their ability to take something you thought you knew and present it in a way that demands attention. And, as it turns out, Larry honed his unconventional ear for music from an early age. The son of a Pentecostal pastor, he spent childhood Sundays at church singing gospel (“Kirk Franklin or Juanita Bynum, on a good Sunday”). That, along with his aptitude for piano, guitar and drums ensured music was always going to be part of his story – but initially, at least, Larry wanted to keep the two worlds separate. “I never wanted to do music in the secular world, because it was so related to church for me,” he says.

But after discovering jungle and R&B through his older sister, Larry had a change of heart, immersing himself in the burgeoning club scene across the river. “Around 2010/11 there was a crew of black kids from south going out to (infamous club night and collective) Work It in east London,” he says. “That’s where I first played.” You can see how his euphoric, chopped-and-screwed take on tracks like the Spice Girls’ “Holler” would get bodies pushed up against each other in the club. His gloopy, excitable remixes of Usher and Alicia Keys are all part of his ability to give new life to songs which are part of the aural furniture. His humour is present at all times, as clearly heard on the track “Nikki Comes 2 The Diary Room (Who Is She?!)”, where he weaves vocal samples from former Big Brother contestant Nikki Grahame into a spacious and surprisingly beautiful R&B offering.

When discussing the need for places where members of the LGBTQ community can go out, Larry mentions new nights like Body Party, in east London, a self-described “intentionally queer and safe space for black and brown bodies”. As someone who identifies as gay, he’s glad that parties like this exist, though “they should just be everywhere”.

For him, visiting New York in 2012 was an eye-opener in terms of experiencing a gay scene that was free from “just being identified by the fact that people were gay”. He was aware of DJs like Mike Q, who was propping up the ballroom scene there, but for him, it was the underground parties in Harlem that were most exciting. “I’d like to see more of the legacy of Work It in London, which was all about the music. It wasn’t about sexuality, it was about dancing.”

“I’ve never really been part of the gay scene here,” he continues. “All the parties were in Soho and I never went to those because I don’t wanna listen to Britney Spears all night – not unless it’s a Total Freedom mix.” Indeed, Larry has a knack for elevating the everyday into something extraordinary, both in his music and in his fashion sense, which he owes in part to his liberal parents for allowing him to discover his own style points.

“I used to wear one blue contact... Teachers would ask if I just had one blue eye, and I would be like, ‘Yeah, miss!’ I guess I always had my own thing going on” – Larry B

“My parents let me wear things how I wanted to,” he says. “I wore a uniform, but there’s always a way to tweak it, isn’t there? I wore low Kickers with laces – though, mind you, when I got them in year ten, everyone was like, ‘Nah, you’re gay.’ But I wore them with black denim trousers and soft piping that you’d get from the market, rolled up with white socks. I used to wear one blue contact, too. Teachers would ask if I just had one blue eye, and I would be like, ‘Yeah, miss!’ I guess I always had my own thing going on.”

It’s precisely this ‘thing’ which has captured the attention of fashion-world names like Grace Wales Bonner. When I ask whose looks he’s inspired by, Larry reels off a list without missing a beat: Willow Smith, Mutya Buena, Jean-Michel Basquiat.

Of course, the fashion world is notoriously forgiving when it comes to male models embracing gender-fluid looks, and there is a clear cultural reference point in the vogue houses of Brooklyn that celebrate black gay men adorned in couture fashion. But what if you’re a young boy on the streets of south London? How do you learn to empower yourself when there are few people that look like you?

“When I started getting into fashion in 2009, my cousin died,” says Larry. “He was a DJ and MC – he was stabbed outside a London club after he had played out with friends. That was at a time of a lot of stabbings. It made me realise that life is short, and that you had to do exactly what you wanted to do. My cousin was always a go-getter. After that, I started to get really extreme with my look. I used to wear black lipstick, black nails, platform boots and skinny jeans. When it comes to black masculinity, there’s a lot of complex shit going on.”

Larry went on to study fashion and photography at Central St Martins, curating his own uniform using donations from friends, his sharp eye and whatever he could make. (His current favourite item is a pair of luminous green corduroy Von Dutch bell-bottoms, which are “tight as fuck”.) Right now, he blames his casual look on the fact that he’s spending so much time in the studio making tracks for a possible EP. He’s working on a collection of “soulful love songs to dance and fuck to”, inspired by the likes of Kelela, Nina Simone and Luther Vandross.

Before I leave, I ask Larry if it’s been a struggle being so uncompromising. He shrugs. “When I was younger you’d be made fun of for being African, then when you’re older there’s a whole different world – homophobes, police or whatever. If you’re gonna be exposed to that anyway, why not just do what you’re doing? What is there to be afraid of?” I ask if he’s ever encountered police harassment first-hand, and he laughs. “I’ve never been stopped and searched, but of course I’ve seen it all my life. I’ve never had anything like that, maybe because they can just sense I’m on my own thing... I guess wearing a Gucci handbag has helped in that respect.”