London-based São Paulo raised artist Cibelle is working on her third album while collaborating with art projects and trying her hand at styling. 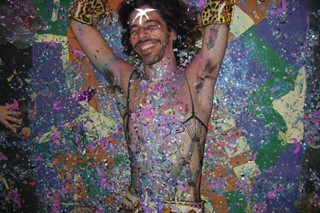 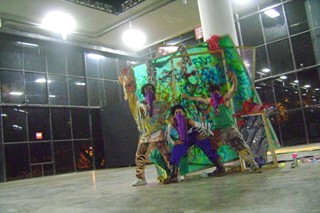 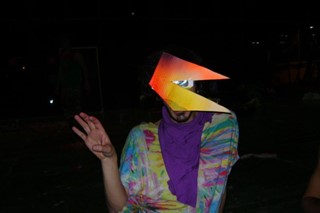 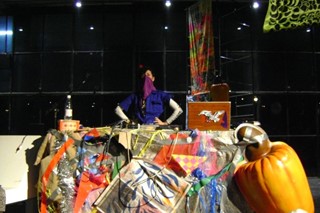 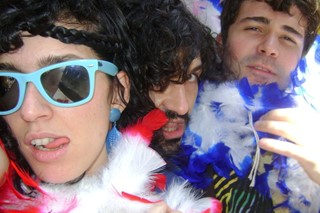 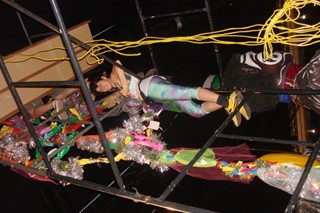 Everything that happens to her, Cibelle states, is caused by a strange kidnapping process: one artistic self kidnaps and delivers her to another creative person who lives inside her, so that different parts of Cibelle take control at different times. But being kidnapped by life, as Cibelle puts it, intrigues her as it makes her richer inside. The talented artist burst on the scene in 2003 with a beautiful self-titled debut album followed by “The Shine of Dried Electric Leaves”, a work that combined acoustic tracks with electronic elements and melancholic melodies with complicated soundscapes and featured renowned international artists such as Brazilian singer Seu Jorge, French MC Spleen and Devendra Banhart.
At present she is working on her new album, though her artistic self tried to kidnap her again, prompting Cibelle to take part in various art shows and at the recent 28° Bienal de São Paulo with New York’s art collective assume vivid astro focus (AVAF)

Dazed Digital: As a child were you already into music?Cibelle: I was enrolled in this music academy that was part of an art school from the age of 6, so I was involved in different activities all the time alternating them. I started studying acoustic guitar, then moved on to piano, meanwhile I had access to all the paint and clay I could ever ask for. I also studied drama, Indian music and went to clown classes. I guess I was a strange child and teenager: I read Sophocles when I was 11 and thought I was super cool, but also not cool at all as I spent a lot of time by myself singing into my hairbrush and writing poems in between classes. When I grew up I ended up doing the same things I used to do as a child but to a professional level and in a strange way. My first recording session was with Serbian producer Suba. I used to be in his band and was also his protégée and he taught me some studio skills as well. After I met him I felt music kidnapped me from acting, so I focused on recording my albums and went on tour.

DD: How long did it take you to record “The Shine of Dried Electric Leaves”? C: It took me over a year. It usually takes me a long time as I love collaborating with other artists. I find working in pairs much better as in this way the storyline gets more interesting. The album was about travelling, cross-producing and cross-editing with my friends and directly affecting each other’s works. It’s called “The Shine of Dried Electric Leaves”, because I wanted it to have the sound you get when you jump on a pile of electrified dried leaves on a damp dirt ground. The dried leaves dust is the high frequency sound, the damp ground represents the deep bass and deep beats, the leaves crackling are the glitchy sparkly electronic timbres. My favourite track on the album is Tom Waits’ cover ‘Green Grass’. I fell in love with this song the second I heard it and it became a part of me. I feel it can mean so many different things every time I sing it.

DD: What’s inspiring you at the moment?C: The world of “exotica” but in a twisted tropical punk way, abravanado, messy, scruffy at times, then crisp and clear like Yma Sumac’s high notes, but through Raymond Scott’s eyes while making out with a hula girl in Blade Runner São Paulo clashing with “dancehallsy” Dalston. I’m working on this with Damian Taylor, Björk’s musical director and right hand programmer/co-producer, the album also has collaborations with Mocky, some guitars by Owen from Hot Chip, bass by Metronomy’s Gabriel Stebbing, duets with Josh Weller and Sam Genders from Tunng, and guitars by Kristian Craig Robinson (aka Capitol K), Chrome Hoof’s Kenichi Iwasa and A.Human’s Jacob Tielmann. I’ve also been fiddling a bit with Etienne from Radioclit. It feels like a pretty crazy album, but I’ll only know exactly what this will sound like when Damian and I close the studio door and say ‘It’s done!’
DD: Is there a director you’d like to shoot your videos with one day? C: Michael Gondry, I love his stuff. I’ve actually met him recently in Brazil and we ended up jamming in my friend’s bar. He played drums and I sang, but no video proposal yet.

DD: Your pictures seem to have a peculiar aesthetic quality about them, would you ever work as a stylist for a fashion magazine? C: I’d have a go, but I’m really into “wrong” and “ugly” things. I’m fascinated by the idea of bad taste. What is bad taste? What is good taste? I feel like if you surrender yourself to the ugly, you free yourself and end up creating something beautiful. I’ve actually just done my first styling, but as an art project with FUR’s Cassia Tabatini for a mag in New York, focusing on the “wrong and ugly” theme with big mash-ups, colour/printclash and no sense at all. I also designed the set with lots of one-pound shop trash from Dalston, really banal stuff clashing with F Kawallys’ prints.

DD: You are part of Rick Castro’s “Abranavista Movement”, what is it? C: Abravanar means to free yourself as much as you can and break behaviour patterns. Rick uses colour explosions to communicate this to people. When we go for an “abravanaçao” we express ourselves without any barriers or limits, whoever joins us will “abravanar’ in a different way, but usually it happens through lots of colours, noise and dressing up. Rick Castro and I sometimes take the form of one open entity, Rikelle Cavastros. We did a performance together with Carolina Gold and Rafa Dejota, at São Paulo’s Bienal as a part of AVAF that was called “PASSE: A Vida Amando Feroz”. We started with a sound sculpture of Rick’s animal noises and mumblings and my voice, plus beats and other sounds, while painting people’s faces and throwing confetti up in the air. It was truly beautiful, people really went for it, it became a big abravanaçao in the end, with everybody enjoying themselves.

DD: Which are your favourite bands and which bands are bringing fresh perspectives to music at the moment? C: As for bands in London at the moment LaShark are very fresh and quite mental; The Golden Silvers make my day, they are groovy, with hints of 50s barber shop harmonies, mashed with funky prog. I’m really into some early Metronomy tracks, from the album before this last one, it sounds like gipsy rockabilly through an Atari re-processed with disco bass and there’s nothing that beats that freshness. For what regards the Brazilian scene, Cidadão Instigado is amazing live and Fernando Catatau has the freshest guitar sound.

DD: What’s your New Year’s resolution?C: My resolution is not to have any resolution or plan, but keep myself focused on the projects already rolling, such as my new album that will be out in 2009. I’m already touring the tracks that will be on the new album with my band, Los Stroboscopious Luminous, an extended group of artists that have their own projects and play with me when they want or can in the country where they find themselves. The line-up usually features me plus 2 or 4 other artists, depending on time, place and date, and that is shaping the album a lot.
Read More