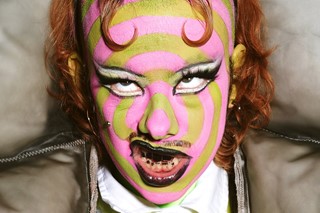 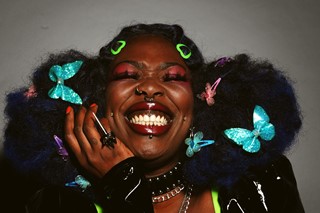 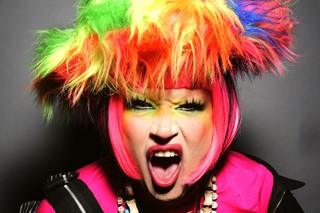 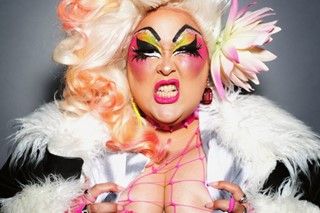 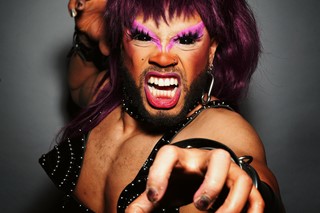 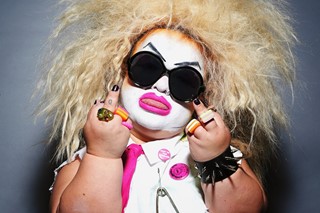 “It’s the sound of the underground, the beat of the drum goes round and around...”

Girls Aloud’s Y2K banger supplies the title of Travis Alabanza’s first show for London’s Royal Court, a genre-blurring tour-de-force billed as “part-play, part-raucous cabaret [and] part-workers’ manifesto”. Alabanza, the performance artist and writer behind acclaimed one-person play BURGERZ, calls Sound of the Underground “an homage [to] and an interrogation into” the London queer club scene that nurtured them.

One of its eight-strong cast, Tammy Reynolds, who performs in drag as Midgitte Bardot, says Sound of the Underground will “show audiences that little perineum-gooch area between the worlds of theatre and drag”. Another, the iconic Ms Sharon Le Grand, promises that the 150-year-old Royal Court Theatre “has never seen anyone like us, let alone what we’re about to do on the stage.”

Each of those cast members is a dynamic and disruptive legend of London’s queer club scene. There's Chiyo, a drag artist and model who was the first trans man to compete in Mr Gay UK; Lilly SnatchDragon, a neo-burlesque comedy drag performer who co-founded queer Asian cabaret collective The Bitten Peach; and Wet Mess, a performer whose mantra is “everything is sexy, nothing is forever”. Joining them are Rhys Hollis as the “gender-fucking cabaret creature” Rhys’ Pieces; the performer, speaker and space-maker Mwice Kavindele as Sadie Sinner the Songbird; and Sue Gives A F**k, a drag queen and comedian who definitely lives up to her witty moniker.

When Alabanza and the play’s director and co-creator Debbie Hannan put out an open casting call, they were inundated with more than 600 responses. “Hundreds and hundreds of them were totally castable – it was wild,” says Hannan when I meet them and Alabanza backstage at the Royal Court. “So really, we had to figure out what the perfect alchemy [of cast members] was and what the best representation of the [queer] community would be.”

“We had to make sure there no double-ups,” adds Alabanza. “Everyone had to bring something different. Like, if we auditioned a drag queen who was slightly sarcastic and did great comedy, we’d say: ‘They’re great, but we’ve already got Sue Gives A F**k [bringing that].’ It was like a queer jigsaw puzzle.”

As soon as I enter the Royal Court’s rehearsal room, it becomes clear that Alabanza and Hannan have captured the right alchemy. Reynolds is otherwise engaged – we speak on the phone the next day – but the other seven cast members gather in an animated gaggle to discuss the play and their creative process. They’re a company without hierarchy where everyone is given an equal opportunity to share their thoughts.

“The nature of our industry is based on individualism – it’s never really looked at in terms of collective success,” says Kavindele, who founded The Cocoa Butter Club to celebrate performers of colour. “And while some of us do belong to collectives, at the end of the day, when it comes to billing for money, it’s down to us individually. And so this experience has provided us with an opportunity to understand that we were disenfranchised because of the way our industry is set up.”

Now the cast members are working together in the daytime, away from the shots and chutzpah of the club scene, they’re realising how much they have in common. “It’s given us an opportunity to let our guard down,” adds SnatchDragon. “We’re letting go of that [performer’s] persona a bit and allowing more of our vulnerabilities to come through. And that’s been really nice.”

Many of them have a healthy irreverence for the venerated space they’re working in, a theatre with a rich history in one of London’s wealthiest boroughs, Kensington and Chelsea. “Everyone’s telling us it’s a massive honour to perform here, which it is,” says Chiyo. “But at the same time, a lot of us are punk and anti-establishment and we’re bringing a blessing to this space. So I think they should be thanking us as well.”

The cast is also keen not to give too much away about a play that’s designed to make the audience question the true value of art and performers’ labour. “Bring some change, tip generously,” says a call-to-action on the website. “It says something about queerness and assimilation and money, but it’s also about reclamation,” says Sue Gives A F**k. “It’s a reclamation of the reasons we do drag in the first place instead of doing theatre. Maybe we don’t always get to do drag in line with those reasons, but this play is about that too.”

“It pays homage to the queer club, cabaret and drag scene and the amazing performers who keep it alive by putting their life and soul into it” – Wet Mess

Because the play is a “workers’ manifesto” by design, everyone involved put their cards on the table by revealing whether they took a pay cut – or got a rise – by agreeing to take part. These candid conversations about remuneration were incorporated into a script that Alabanza wrote after casting was complete. Each role was precision-tooled to the performer in question, then developed in the rehearsal room. “It was like being given a balloon that we got to inflate ourselves,” says Hollis. “To be trusted like that is a really special experience.”

This highly collaborative approach is reflected in a shape-shifting show that begins with a union meeting, morphs into what Hannan calls “a wild American army movie”, then ends with a full-scale cabaret. “At the start, everyone is playing a version of themselves through the play I’ve written,” says Alabanza. “And then as it goes on, they become more and more themselves. The last act is them being them in the clubs, but with the resources you get in a theatre.”

Alabanza and Hannan are less coy than the cast about the play’s themes, revealing that it tackles the impact of RuPaul’s Drag Race head-on. “We talk about what it means to have a corporation absorb an art form that was birthed from subversion,” says Hannan. “We have bodies on stage that wouldn’t get into [Drag Race] and yet these performers are at the top of the league. And so we ask: what does that mean for the scene’s future? Are we going to lose these performers, and is it worth it to see 12 people [on TV] with the same face?”

Everyone involved is confident the play will open the minds of theatre-goers who may never have been to a drag show before. “It pays homage to the queer club, cabaret and drag scene and the amazing performers who keep it alive by putting their life and soul into it,” says Wet Mess. “For the most part, the wider world doesn’t know that world exists, and they don’t understand the power it has.”

For this reason, the play ends with what Hannan calls “a moment of utopia” as well as “a stark reminder”. Namely: if we don’t protect the sound of the underground, the unique beat of its drum will peter out. “By watching this play, you’ll actually experience what you’re going to lose if this scene disappears,” Hannan explains. “You’ll see the root of it and the craft and respect that goes into it, and the reasons it needs to be cherished.”

Sound of the Underground runs from January 19 to February 25 at the Royal Court. Book tickets here.