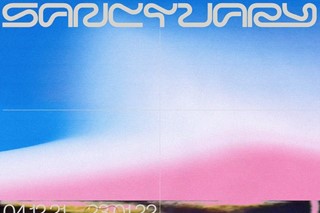 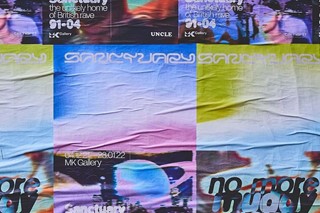 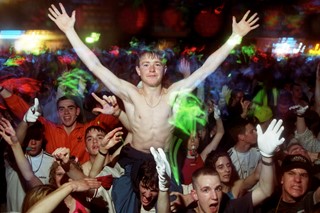 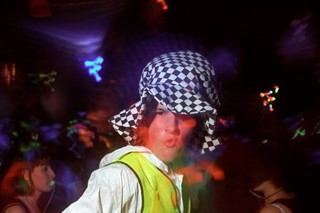 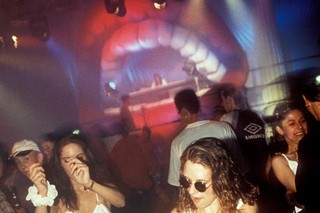 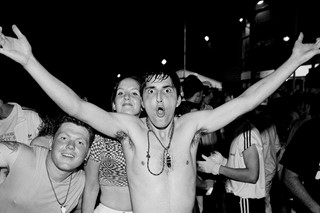 “It has this reputation for being empty and dead and cultureless,” says Emma Hope Allwood, painting a mental picture of her hometown. “I used to really buy into the idea of it as this void of a place, but that’s not the whole story.” As a city, Milton Keynes only dates back to the late 60s, when local authorities decided to join existing villages together with housing estates and plonk an enormous shopping centre in the middle. “That’s the most cynical description of it,” she adds. In reality, it was built on a vision of the future – progressive and pioneering with sustainable, architecturally-innovative housing, Corbusier-inspired paintjobs, pedestrianised streets, and lots of cycle paths. “We literally have robots that deliver takeaways and groceries,” she says, having just spent two weeks back home.

As Dazed’s former head of fashion, Allwood remembers sitting at swish industry dinners, laughing it off when people told her she didn’t seem like the kind of person who had come from Milton Keynes. “What does that even mean?” she’d think, knowing that, in some way, those remarks Venn-diagrammed with her own experience of growing up. “I felt trapped, like most teenagers in suburbia do, like I had bigger aspirations, bigger dreams. I worked in the shopping centre and, yeah, we had loads of fun throwing field parties, making bonfires, illegally camping in parks and down the side of dual carriageways, but really, there wasn’t much to do.” Something began to shift, though, when Allwood found herself researching rave culture for a fashion article, landing on the now-iconic flyer for Dreamscape 1, which, much to her surprise, came stamped with a Milton Keynes address.

“I was like… what? I had never even heard of the Sanctuary, where it was held. From that point on I kept seeing the flyer pop up on Instagram and, then, over lockdown I realised that December 2021 would mark 30 years since Dreamscape,” she recalls. Having wanted to give curation a go for a while and with a friend’s advice – “to tell the stories that you can tell” – ringing in her ears, she thought that maybe this could be hers. It became something of a pandemic project for Allwood, piecing together the unlikely story of how a man named Murray Beetson transformed an empty warehouse in Denbigh North into Britain’s biggest rave venue. After more than a year spent scouring books, watching grainy documentaries, and mapping the ascendancy of house music, jungle, and drum & bass in Milton Keynes, this month, Allwood opened her debut show, Sanctuary: The Unlikely Home of British Rave.

Though she’s a writer by trade, she explains it felt important to go beyond words and trace the story of Milton Keynes’ all-night honeypot through objects, things, and stuff, its physical touchstones. With the support of Carhartt WIP, Allwood began driving up and down the M25, backseats piled with club paraphernalia, interviewing middle-aged parents about the glory days of the UK rave scene, before clambering into their lofts to hunt for the vestiges of their past. It was an essential part of her process, not only because she was still in primary school when the Sanctuary closed but because – and Allwood is the first to admit this – she has never been much of a raver. “My experience of going out in Milton Keynes was, like, Oceana and chart hits, which I just went along with because we all did, but it was never something that particularly spoke to me. I mean, I was an emo,” she laughs. “But I am interested in subculture, underground scenes, and youth movements, how they become popular and are referenced later on. And the people who were pioneering the rave scene around Milton Keynes were actually really young. They were kids.”

Holed up and scratching to get out, lockdown was an uncanny reminder of adolescence for many of us, including Allwood, whose sense of home, and, by extension herself, are embroiled in the project. “I grew up with the opportunity to be bored and I think that’s really helped me. I stayed home, read books, and watched films, and I really developed a sense of myself.” She can say that in hindsight, of course, but she legged it to London to study English Literature the second she turned 18. That’s why there’s skin in the game. “I want the exhibition to be inspiring to the next generation of people in MK. My dream would be for some 19-year-old to go and be like ‘Oh my god we should put on a rave’. That’s why I included a Palace t-shirt from 2015 which has the Dreamscape logo on it. I wanted to show people that MK has been referenced and that we should be proud of it.”

So what of the Sanctuary itself? Though it has now been replaced with a behemoth IKEA, the club ran from 1991 to 2004, luring world-class DJs and almost a million punters to 12-hour-long sessions with names like Helter Skelter, Hardcore Heaven, Jungle Fever, and Fantazia. Catalysed by the scrappy undeground rave scene of the 80s, the rise and fall of the Sanctuary chronicles one of the most important chapters in the legalisaton of UK hardcore – embodied by the “no more muddy fields” mantra, as Allwood’s exhibition posters, designed by POST HEREAFTER and flyposted around London by UNCLE, can attest. Not only was the venue instrumental in the development of EDM genres, it was essentially the cradle of grime music in the early 2000s. As London venues were vexed with shootings and bad press, nights like Sidewinder emerged as one of the only places Dizzee Rascal, Wiley, Lethal B, and other proto-MCs could perform – following in the footsteps of The Prodigy, Goldie, Metalheadz, and DMX. Even if a flashmob of ex-ravers did take over the soft furnishings section of that jumbo IKEA in 2008, the Sanctuary years marked a moment of musical hedonism that we are unlikely to ever get back.

Clubs are often likened to churches and raving has long been allegorised as a form of pseudo-worship. Being high, blinkered to reality, and giving oneself away to repetitive beats, however, is ultimately a self-serving practice. And yet these spaces give way to devout and steadfast communities, many of whom have come together again to donate their ephemera to the exhibition, which is lined with flyers, security jackets, VHS tapes, tickets, and whistles. The show also flaunts the Sanctuary’s original road sign, which one clubgoer “basically rescued from a road accident,” as an ode to the gruelling pilgrimage people would make from opposite ends of the country. Likewise, old-fashioned box TVs loop archival footage of the Sanctuary’s 4,000-strong attendees, interspersed with clips of eager visitors snaking down the motorway in their Ford Fiestas. On walking out of the space, an airhorn is displayed on a plinth like some kind of totemic artefact. “These little things are so symbolic of a time. Of people’s youth and a moment in music history. For the people who were there and experienced the rave scene first hand, this is something which really shaped their life and outlook”. Allwood went to visit on the morning the exhibition opened – “to see if anyone was actually there” – and found groups of grown-up friends reminiscing on the times they spent “chewing their faces off” while they implored their nagging children to “let daddy relive his youth”.

“This sounds so wanky, but one of my favourite books is America by Jean Baudrillard,” says Allwood. “In it, he speaks about ‘the tragedy of the utopian dream made reality’ and that to me is like Milton Keynes.” Ultimately, the city’s progressive aspirations fell victim to bureaucracy and budget cuts, meaning some of its more idealistic roots never quite managed to break ground. “This exhibition is an attempt to reclaim Milton Keynes’ cultural history and I hope it proves that there’s an interest for this kind of storytelling in institutions like art galleries and museums.” Though there’s been talk of books, further shows, and documentaries, Allwood catches herself making future plans, vowing that her next big venture is to simply take a break. Rest and relaxation, however, do not seem to be within her wheelhouse. “I think it goes back to growing up in a suburban town and feeling like I had something to prove. Ever since I was a teenager I’ve just wanted to make stuff happen. I have so much more to do.”

Sanctuary: The Unlikely Home of British Rave will run until January 23 2022 at MK Gallery