The auction will feature props from The Matrix, Sense8, Cloud Atlas and V For Vendetta

The Wachowski sisters have announced that they’re holding an auction of props from their films canon to raise money for vulnerable trans youth.

The Enter the Matrix: The Wachowski Collection will be held by Potter & Potter Auctions and features over a hundred items from their film canon and the Netflix cult series, Sense8. There’s the Lightning Rifle from the original 1999 The Matrix film and Channing Tatum’s latex ears and gravity boots from Jupiter Ascending; a purple segway from Speed Racer and the iconic mask worn by citizens in V For Vendetta.

On Twitter, Lilly Wachowski called the auction “spring cleaning“, with all proceeds going to the Protect & Defend Trans Youth Fund, which will distribute the funds to multiple trans organisations across America. This includes the Black Trans Advocacy Coalition, which seeks to address “the inequities faced by the black transgender community“ and the Tennessee Equality Project, which provides “educational and organizing programming to advance LGBTQ+ rights in Tennessee“. 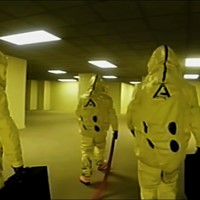 The auction follows news that a record 238 anti-LGBTQ+ bills have been proposed in the US this year alone, with about half of them targeting trans people specifically.

The live auction is starting on May 12 at 11AM ET, but you can take a look at the items in the meantime here.

hi youse! so me and Lana have been doing some spring cleaning at our Raiders of the Lost Ark warehouse and have happily decided to pass on some of the best treasures we've been collecting over the years!! no ark of the covenants but some pretty major and magical artifacts!