‘I got found at Target. It’s a long story, do you want to hear it?’ – after reigning chaos over small-town FLA in The Florida Project, the film’s kid-stars talk sleepovers, role models and making the world a better place

Taken from the winter issue of Dazed. You can buy a copy of our latest issue here.

“This is such a funny story,” recalls seven-year-old Brooklynn Prince of how she came to star in The Florida Project, alongside fellow pre-schoolers Christopher Rivera and Valeria Cotto. “Sean (Baker) brought in kids to see how they would react. Christopher was like, ‘I’m gonna warm up,’ and started doing push-ups. Then I started doing squats, and Val was like, ‘What are you doing?’ We sat in a circle and were just chatting, normal kid-talk. Then Sean leaned over the table and was like, ‘They’re gonna get the part.’”

If there’s one trend director Sean Baker has fostered, it’s the casting of non-actors in comedy-dramas – and he’s got an eye for talent, even if his prospective actors have never attempted the craft. His iPhone-captured indie hit Tangerine brought two trans actresses, Mya Taylor and Kitana Kiki Rodriguez, to the forefront in 2015; Prince, his latest discovery, is already being hyped for an Oscar nomination (Drake’s even a fan, waxing lyrical about the film in a recent interview with The Hollywood Reporter).

Sharing the sun-drenched hues and raw, emotive performances of his breakout film, The Florida Project centres on the lives of Moonee (Prince) and her mother Halley (Bria Vinaite), who are part of Orlando’s ‘hidden homeless’ community. The movie follows Moonee along with best friends Jancey (Cotto) and Scooty (Rivera) as they look for adventure on the outskirts of Disney World, finding hope in bleak surroundings. And if their on-screen chemistry seems natural, that’s because it is; Baker insisted the kids be themselves on set. Jumping around the back of a taxi before the New York premiere, the three hyperactive leads discuss their on-and-off-screen friendships, sleepovers, sage advice and the enduring importance of ice cream. 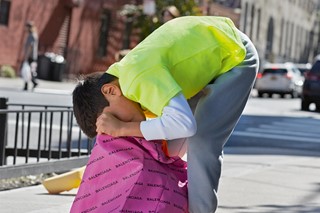 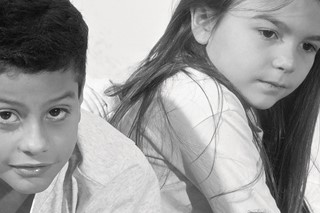 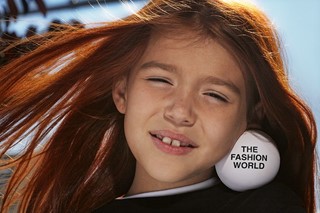 You guys were amazing in the film! I wanted to cry a lot, and I also was very excited about life after. How did you all get involved?

Valeria Cotto: Well, this is really funny, I got found at Target. It’s super-weird. It’s a long story, do you want to hear it?

VC: OK, once upon a time I was with myself, my mother, my uncle and my siblings, and we went to Target to buy some stuff. Sean was following us for a thousand minutes, following us like a creeper and then he said, ‘I’m Sean Baker, I’m looking for kids for a movie.’ My mom’s like, ‘Yeah right, that’s not true,’ in her head. He gives us his business card. Then he just walks away. Then we get all our stuff and go home and my mom asks, ‘Do you want to do this?’ And I said, ‘Yes.’ I auditioned and I got it!

Christopher Rivera: It’s my first role, too. Sean met me when he brought the actors to the hotel I used to live (in), called Paradise Inn. It just happened.

That’s awesome. Is acting something you all want to continue pursuing?

Brooklynn Prince: You’re going to have to do different directors.

VC: But I just want Sean, he’s such a lovely director.

VC: I want to continue (with him) because it’s in my blood.

How did you guys prepare for the emotional scenes in the movie, like the final one?

BP: I just thought about someone going through that same situation. I knew it was the ending scene and I had to do my best. It made me emotional because I love my mom, and I don’t ever want to be in that situation. It all started with small talk, and Val was like, ‘Are we going to have a sleepover this weekend?’ I’m like, ‘No, I have to concentrate. I have to get this thing done first.’

VC: When she started crying, I started freaking out. I took a breath in and said let’s prepare and then my eyes filled up. And I was like, ‘Woah. I’m freaking out, this is real and it’s actually happening.’

What was the most fun you had on set?

BP: Having a sleepover.

VC: Yeah, having a sleepover and having Cheetos and running in the halls.

BP: But we weren’t running in the halls...

VC: I just made that part up!

What’s the best thing about Florida?

BP: It’s summertime every day; that’s all I can say. There are chocolate-covered cones at McDonald’s.

VC: Oh yeaaah, the food is good and it’s steaming. And there’s no frou-frou food.

BP: A shower and a bath are the same! But a shower is like rain.

BP: The Pirates of the Caribbean and Peter Pan (rides). I like meeting the princesses and the Star Wars people.

CR: My favourite is Space Mountain because it’s dark and it goes really fast.

Valeria, how similar are you to your character?

VC: We’re alike, because Jancey is shy (at first) when she gets to know someone.

BP: I was shy when I first saw (Valeria), and started talking to her and gettin’ all crazy with her. But now... (whispers) I love her.

So, do you guys all hang out?

VC: Yeah, we hang out. We’re going to hang out after this for a little while. (makes dancing noises)

BP: Well, (let’s) not get crazy because we’ll have curls in our hair.

VC: Wait, what? We’re getting curls?

BP: Yeah, I got curls and you got curls.

Which other actors would you like to be in a movie with?

What was your favourite scene from The Florida Project to film?

CR: Where me and (Brooklynn) are looking and then the (ice cream) drops and Willem Dafoe says, ‘One drop...’ Then I say, ‘But c’mon!’

CR and BP: (acting out the scene together) ‘It’s gonna melt outside.’ ‘Thank you very much.’ ‘You’re not welcome!’ (laugh)

Did you ever get advice from an actor that stuck with you?

CR: I got some advice from Willem Dafoe. He said, ‘Have courage in you, and try your best.’

BP: Elle Fanning was super-nice and she said, ‘Follow your dreams.’ Aww, she’s so sweet.

What do you hope people get out of this film?

VC: I hope when people see this movie they learn a lesson. Some people are like, ‘Nah, they’re all right.’ But they’re not. But then some people just realise this is a real situation and they need to this see this movie to see what’s happening and help them. They need to help them a lot because they have nothing.

CR: I hope people that don’t have homes can encourage (the public) or raise money so they can have something to buy, like food and homes.

How can people help?

BP: They can go to hope192.com and they can help struggling families around Kissimmee, Florida – and all around the world – and that will make it a better place. Also, you can find things that you don’t use any more at your house and donate them.

The Florida Project is in UK cinemas now