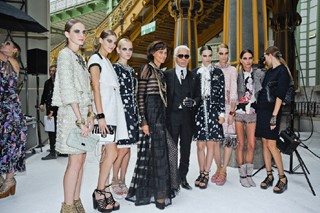 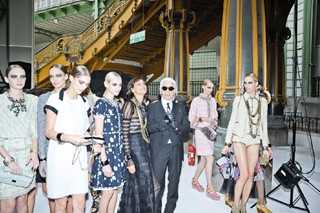 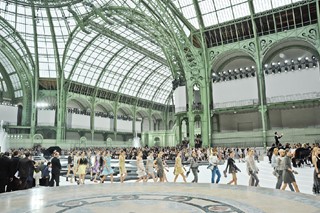 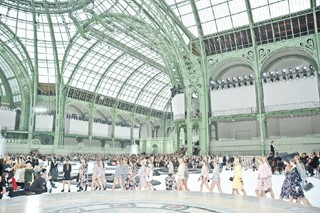 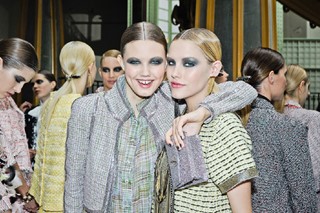 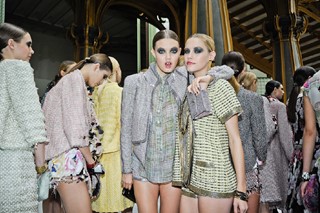 There are fashion shows and then there is a Chanel fashion show. The set, ambiance, music and of course the ever present Grand Palais are elements so essential to the communication of Karl Lagerfeld's latest vision for Chanel and this time it was no different with its stark monochromatic Versailles-esque garden, inspired by Alain Resnais' 1961 film 'Last Year of Marienbad' - which was also the starting point of the collection. Incidentally, Coco Chanel herself also designed the costumes for the film but that was only a loose footnote which bore no relation to the eighty plus looks we saw serenely paraded around this gigantic Chanel park for all to slowly gaze at. With the sense that there was no gimmicky theme or motif to latch onto, it made Lagerfeld's technical fabrications and atelier craftsmanship all the more clear to see. The opening portion of tweed with laser cut holes was surprisingly deconstructed, yet made for a refreshing take on the classic Chanel suit. Edgings of feathers, slashings that revealed nuggets of sequins, patchwork tweed, tulle hangings and a general contrast between the prim and ladylike Chanel house shapes with fabrications that were beautifully undone or slightly raw-edged pervaded the collection.

The decade of the aforementioned film informed the shapes which had jackets swinging away from the body or the Jackie-O pastels but still there was not a thematic collection by any means. Especially when it progressed into an eveningwear portion of mainly black dresses in tulle, lace and feathers (save for a wonderful peach feathered billowy gown worn by Carmen Kass), where any length and style went between Empire line, modern flapper, babydoll, 50s full skirts and touches of Victoriana and Edwardian, best seen in the black banded sheer dress worn by Inès de la Fressange who once again walked for Chanel to great applause. Backed to a sweeping soundtrack provided by the Paris Orchestra, the build up to a rendition of The Verve's Bittersweet Symphony made for a heart-swelling emotion felt in all of us as we had just witnessed an epic feat that pounded in why Lagerfeld is still going strong (despite rumours of retirement) and why his legacy at Chanel is close to equalling the level of importance of the founding lady herself.