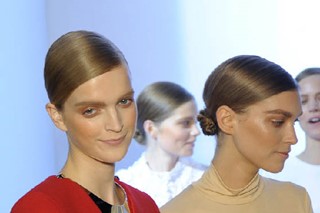 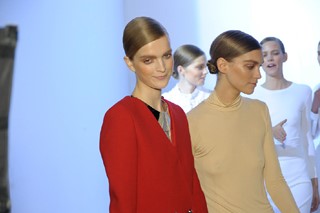 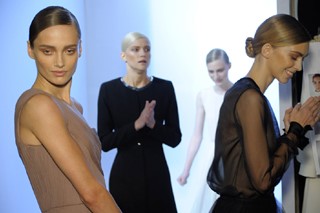 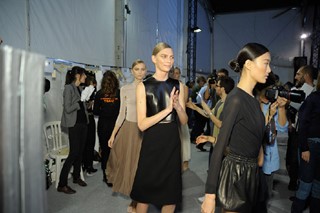 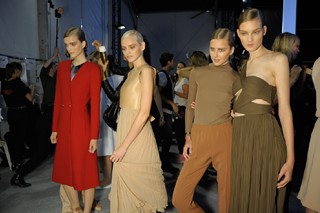 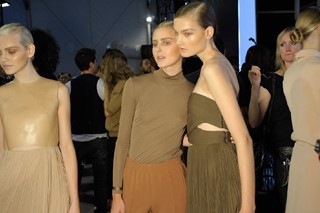 The past two seasons of Chloé camel offerings clearly had resonance as the audience for the S/S11 show was awash with beige coats and capes, worn with denim shirts in some instances. Hannah MacGibbon's sensibility for feeling what young women want to wear set up the regular sense of expectation for this show. What we got was a sleek and svelte vision, with barely any embellishment to speak of to allow controlled funnel neck coats, draped cross-over tops, dresses with full-ish skirts and tunics that split up the thighs to work their sportswear-led talking. All in a palette that hardly ever veered from white, soft peach, cinnamon and of course beige, save for a brilliantly red double breasted coat. Leather sleeveless tops cut high at the back (unexpected revelations of the back area seems to be a recurring theme this season) added touches of toughness to a collection that had very tiny tricklings of ballerine references in the shoes, in the modest tied bow at the back of skirts, in the flow of a long tulle or chiffon skirt (worn over shorts for modestry's sake) and in satin-banded trousers. The accessories was shrunk down to size into small boxy clutches with straps that wrap around the wrist to emphasize the looser proportions of the collection. Fresh modernity continues to resonate with MacGibbon and so many women will be along for that ride especially when there's understated elegance in abundance.