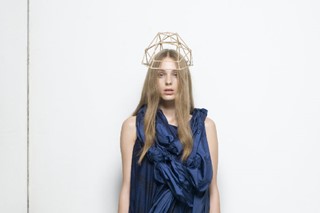 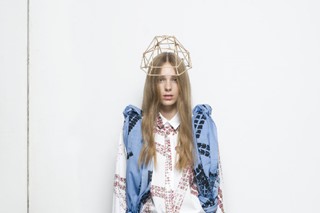 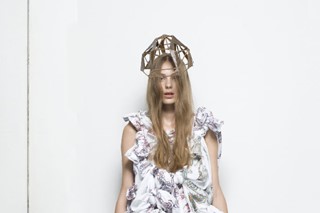 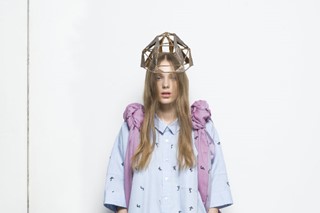 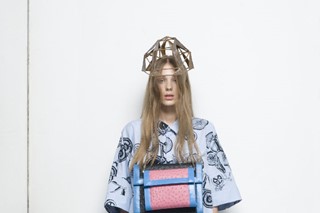 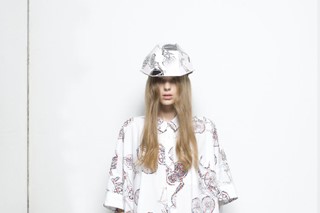 The French designer Julien David first caught everyone's attention with his initial collection of scarves printed on the finest Japanese silk that had pills enlarged and arranged into check patterns. He then moved onto a core collection of black coats that paved the way for his first complete collection for S/S 11. David's pre-occupation with Japanese culture and Fixed Gear bikes come complete in this collection inspired by a girl pounding roads on a BMX where silhouettes are deliberately loosened up in parka jackets with widened bike shorts to match. Silk scarves are knotted into parachuge-dresses and dirt tracks are imprinted onto shorts, all accessorised with hexagonal frame helmets constructed out of lacquered human hair, ostrich skin shin pads and oversized takes on the classic velcro surfer's wallet. David speaks to us about his fixation on street wear and how he wants to build his label up.

Dazed Digital: What is this collection about?
Julien David: It's about the resurgence of the BMX bike. I always do references to streetwear, experimenting with special materials and always trying to 'raise' the idea of streetwear.

DD: How did you initially start out and where did the idea for your own label come from?
Julien David: I moved to New York when I was 19, I work for four years for Narcisco Rodriguez and then for Ralph Lauren. Then I moved to Japanese four years ago and freelanced for a while and then I decided to start my own label. My idea was to use beautiful materials and build the bridge between that and street wear which for me is very strong right now and very creative. People say they take inspiration from it but you don't actually really see it. There is such an attitude and proportion in street wear which I wanted to communicate in my label. I wanted to start with the scarf - because it's such an old school item and so I developed this silk tulle fabric that's unique to me in this factory North of Tokyo. It's almost like satin and the technique is that we spin the yarn more than it's generally done before it's woven. I did three seasons of scarves and then I moved onto the coats and now I have a full collection.

DD: You also have some quite unusual accessories - how were they conceived?
Julien David: For the helmets, I contacted a construction company in Japan and worked with them using their latest design. We made a replication of it for the helmet out of human hair that has been lacquered. The shape of the helmets were actually used in the shoulders of the jackets. I always work with ostrich accessories and this season we made the shin guards, knee pads as well as the Converse tongue covers. We also did the oversized surf wallets too in ostrich skin.

DD: What streetwear brands do you admire and do they influence your own work?
Julien David: I like large brands such as Nike, especially NSW (Nike Sportswear), Northface (Japan Purple Label), Penfield, New Era, Vans, Reebok and Converse. Then smaller brands such as Supreme, Undefeated, White Mountaineering, Alife, Visvim, Ice cream / BBC and Stussy. I like how those brands communicate; I like the stores, the merchandising, the attitude and the energy they have. I get inspired from their choices in design, colors and materials; the looks, the proportions and the authenticity those brands manage to create.

DD: What makes streetwear for you fresh and exciting?
Julien David: Street wear started about 25 years ago, initially it came from a mix of surf / skate culture, sneaker culture and hip hop. I have a strong interest in it because I grew up during the period streetwear initiated. It became such a huge movement it was normal when I was a teenager to like these things: the music, the sports, also the rebellious attitude and freedom/youth linked to it. It's rare to experience the inception of something that become so popular.

Nowadays, it's quite amazing to see how sophisticated and thought out streetwear items are; I can spend as much time looking at a down-jacket from a street brand than at a beaded intricate piece from the most classic fashion house. I would like luxury items to stop looking so conservative; even though we can see some amazing things, I believe most people who spend a large amount of money on high end clothing are still very contrived by the general offering and by what is commonly accepted. I am interested in challenging the perception of what a luxury product is, and referencing streetwear is for me a nice way to initiate this dialogue.