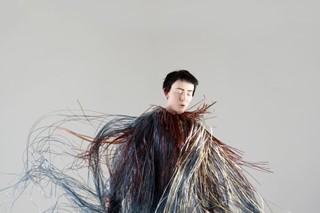 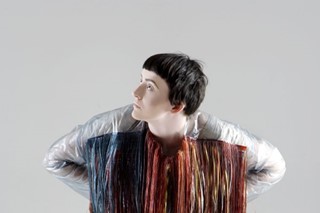 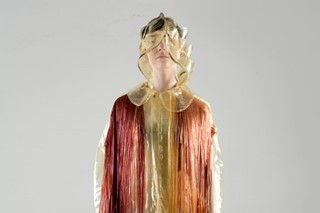 Jane Bowler is a recent graduate from the RCA. She is a bundle of energy and owns a bundle of junk that you would probably consider useless. Those plastics, rubber bits, bath mats or old shower curtains that you would dispose of are the primary sources of her extraordinary and beautiful work and it is easy to see her pieces becoming an instant hit in the ever mutating and challenging world of fashion.
Dazed Digital: Talk us through your collection, in a nutshell.Jane Bowler: The collection I presented at the RCA was called Fusion and now I’m working on a new one that opposes it, called De-Fusion yet it caries the same theme of sustainability. My pieces are made of melted plastic or using old knitted jumpers. I am fascinated by the idea of picking cheap materials, refuse and waste and convert it into something luxurious and beautiful. I am now creating cropped versions of my long coats, with shorter tassels. And I’m making hats.
DD: Are your pieces wearable? Or just one-off samples?Jane Bowler: I got quite a lot of response after my final show from people saying that they wanted to wear them so it is a question of making them commercially viable. I do not think of wearability to start with, however. The materials I use and the process of making the piece dictate or lead the way. So I need to bring them down, simplify them, to be able to show them as marketable pieces. Thankfully, because I have been working in the industry twp years previous to doing my masters at the RCA, I kind of have an idea of what people look for and how I can fill in the gaps.

DD: Did you then go to the RCA with an open mind or were you reliant on your fashion background? Jane Bowler: To be honest, I had already worked and experimented with ready-made plastic materials but I enrolled thinking that I wanted to do something completely different and explore other venues. I found my way with the RCA. It took me a yea to find my feet and even though I sort of went back to my original ideas, the approach is totally different and it all feels much more solid. In fact, it was a project with the WGSN, an online trend company, what determined and led to what I created in my final year.
DD: So what uncommon materials do you use and what is your process?Jane Bowler: I’m keen to use what’s uncommon in fashion and what can be ‘recyclable’. I go to the Hackney scrap and I find plastics there. I go to hardware stores and buy things like shower curtains, bathmats… I pick them up randomly and play, experiment, trying to transform them into something exciting. In terms of the process, though, a lot of the pieces happened b chance. For the tassels, for example I was bonding plastic to rubber mats and found that they were peeling away (which wasn’t my intention) but I realised I had discovered a technique for future purposes and that’s how those coats were created.

DD: What would you say your overall concept is?Jane Bowler: I’d sum it up by saying it is sustainability emphasizing beauty and luxury; making garments that last forever. Since I come from a textiles background I had to re-work the concepts of cutting and patterns. So instead of stitching, I weld garments together. I’ve turned the aesthetics idea of traditionalism around. I’m inspired by the Japanese traditional straw coats as a new form of Mackintosh coats.
DD: How long do you take to make one coat?Jane Bowler: Well, the process of coming up with the idea and experimenting with materials took me a whole year, but now I can make one in about four days. Is that long??
DD: What are your up and coming projects? Where would you like to see yourself in five years time?Jane Bowler: My studio is full of scrap and stuff to work with so that is a good starting point! I am thinking of approaching a designer myself although I know that my work is very individual so I would rather have the label onto my own name. I think that’s my first and main project at the moment. I would, though, love to work with Issey Miyake and working with House of Flora on hats is on the cards. I would also love to see Florence and the Machine wear one of my garments or my cot onstage. I have tried to approach her stylist but I have not heard yet. But the lead singer of Teenagers in Tokyo, an emerging band, will wear my pieces at gigs. Because they flow so much, the garments have a huge stage presence. I’d also love to have a few shops in Japan where I create bespoke designs from old knitted clothing… but hey, (laughs) maybe I am being overambitious?