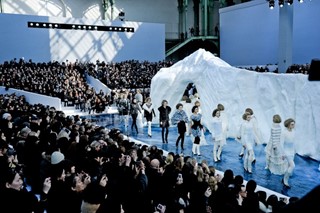 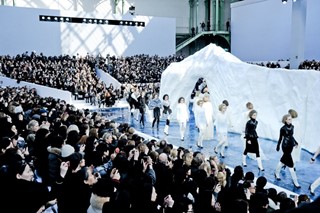 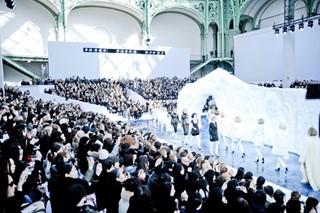 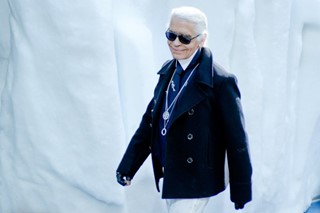 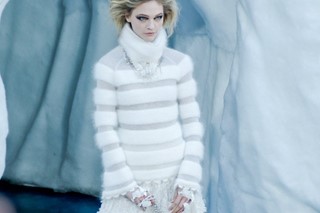 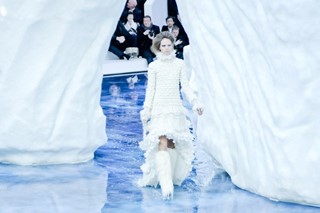 No show comes bigger and slightly veering on the realms of ludicrous as Chanel. Walking into the Grand Palais and being faced with a giant iceberg (yes, that is real ice shipped in from Scandinavia), we knew Karl Lagerfeld had some frosty moments set up for us, pieces that would be much appreciated right now in the ridiculously cold climate Paris is currently experiencing.

So three Arctic creatures in shades of grey and brown and white fur and a more elegantly clad Freja Beha Erichsen were to set the tone of the show. Fur was the big story but it turns out that all of it used was fake, contradicting with Karl's tenure at Fendi. The 'fun fur' aspect only added an interesting contrast point the usual Chanel fare of tweed pieces as it was used in abundance as puffed out sleeve-ends, bottom halves of jackets, boots, skirts and even full length trousers. Accessories were a playful take on ice themed translucency with Chanel quilts mimicking ice trays and neckpieces were crystallised. Knitwear was also pushed to new technical feats as demonstrated by the degrade pale blue and white knits and the grey patchwork knitted coat. The whitest of white fit for a winter wonderland took over the last portion of the show that showcased different techniques of knitwear and once again we had Freja acting as bride in a tighly knitted sweater made to look like boucle tweed and a frou frou flounced skirt.