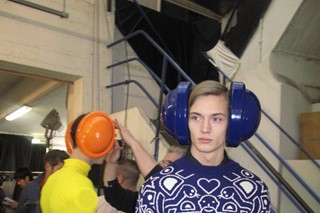 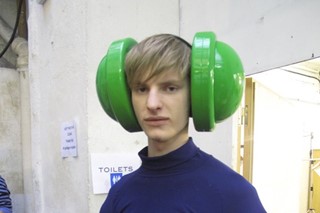 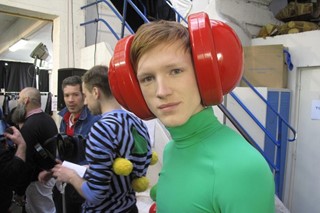 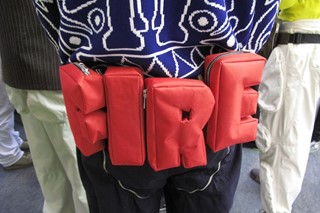 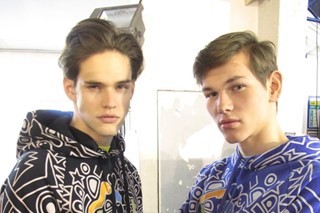 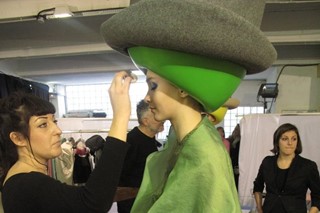 If there was a consistent theme at the Walter van Beirendonck show on Friday it was the gigantic earmuffs that each and every model wore. That is, of course, until van Beirendonck brought in the heavy artillery in the form of boys and girls in over sized plastic riding helmets.

Yes, you’re never bored at a Beirendonck show: colours, prints, proportions and sizes are all taken to their extremes. But as always van Beirendonck isn’t just doing it to amuse us; there is a point to everything he does and this season it came in the form of printed guns. The machine guns printed tops and bottoms were meant to remind us of the fragile and dangerous world we live in.

Red, orange and yellow was his colours of choice this season, and they came out in the shape of boiler suits, Lycra tops and knitwear. A few suits also appeared, reminding us of Walter’s more serious sartorial side. Elaborate knitwear patterns continued to communicate van Beirendonck’s message, which shouted FIRE and FLY, at least on his utility bum bags. The grande finale contained skirts in the shapes of elephants, horses, rockets and – of course – guns!

DD: How did you come up with the idea for this show?
Walter van Beirendonck: It’s basically a mirror to the world today, or at least how I see and feel it. It’s like someone is holding a gun to my head, the whole thing is ready to explode. That’s where the gun prints came from!

DD: You seemed to be playing around with – among many other things – the silhouette in this show!
Walter van Beirendonck: Yeah, like in the world, there is tension in the silhoutte as well – so I had Lycra tops that are very tight, combined with loose trousers.

DD: And why did you put girls on the catwalk?
Walter van Beirendonck: I felt it was the right moment for that. I have more ambitions than menswear, I would like to do women’s couture one day.

DD: Who helped you with the hats?
Walter van Beirendonck: Stephen Jones – he’s my head master!