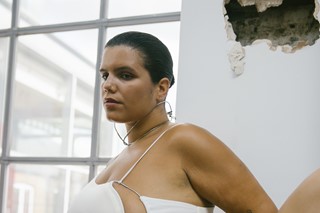 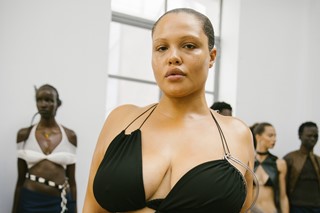 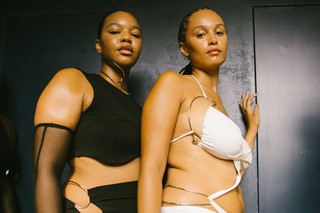 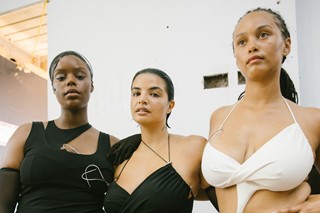 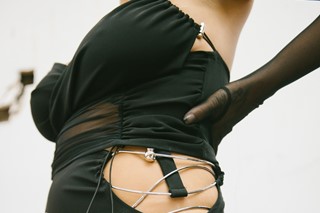 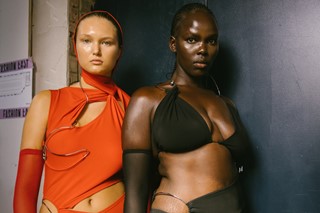 As Tom Rasmussen wrote in their recent ode to London Fashion Week’s wild creativity and unmatched vibes, good fashion should have the power to move you, and I don’t think I’ve ever been quite so moved by a show than Karoline Vitto’s debut at Fashion East yesterday. The tears started coming when I sat down to write her show notes a little under a week ago, and ended backstage with a congratulatory hug with the Brazilian designer. Don’t think this was a chic, elegant teardrop rolling down my cheek in a dignified manner – this was face screwed up, “I think I’m going to have to go outside” style sobs. A fashion person? Showing feelings? Embarrassing!

In case you’re not familiar with her work, a bit of background. Vitto grew up in Brazil, and, given the country’s narrow ideals of beauty, she was hyperconscious of her body from a young age. Things shifted when she moved to London to study fashion at Central Saint Martins. The designer began to strip off and take mirror selfies in which she contorted herself so as to create folds and creases across her body. This became an integral part of her design practice: using moulded metal frames, Vitto started to spotlight the squishy bits we’ve been conditioned to hate as things of beauty, and turned them into a series of sensual vignettes.

Since graduating from the Royal College of Art, Vitto has been hammering away at her label, largely custom-making slinky dresses, pencil skirts, and barely-there cut-out tops bearing these unique steel inserts. SS23 marked her first, fully-realised collection under Lulu Kennedy and Raphaelle Moore’s watchful eye, however, and, beyond being completely stunning, her debut show under the Fashion East umbrella felt like a truly seismic moment for the fashion industry, as she sent her clothes out on a cast entirely made up of ‘curve’ models.

Though there’s still loads of work to be done, across the course of the last few years, the industry has made a massive amount of progress in terms of racial and gender diversity, but when it comes to size representation, fashion is reluctant to make changes. Seeing curve models on the runway is still a rarity, with those cast often feeling tokenistic and box-ticking as opposed to a genuine commitment to making change and catering to a massive community of fashion lovers with money to spend. Being a fat woman working in fashion is hard: not only do you have to sit through endless shows in which no one looks remotely like you, the excuses you must listen to from brands and designers that refuse to include models with bodies that go beyond sample size, or create clothes above a UK size 12 or 14 are truly exhausting.

Yet here is a young designer, with limited resources, who proved that, while it’s not without its difficulties, it’s really not as hard as fashion makes it seem. With casting by Maddie Østlie, not a single member of the model cast was under a size ten, and ranged all the way up to a size 22. And while they looked powerful, and confident, and fierce – and all those hyperbolic terms used to describe fat women taking up their rightful space – in the collection’s skimpy-but-supportive bikinis, dramatic floor-sweeping gowns, and languid, loose-legged trousers, they also just looked completely fab and normal. Like they’d been there all along.

Often when I go to showroom appointments or collection re-sees, I ask if the brand has plans to expand its size range, or cast larger models in its shows. I usually feel like I’m regarded as having a vested interest in this area, that I’m demanding fashion caters to me. And while, yes, I’d love to slip into clothes by some of my fave designers, despite the fact they’ve deemed me an undesirable customer, I’m more concerned that a rising generation of women see themselves represented on the runway, and don’t fall into the trap of hating their bodies in the same way that Vitto and I once did.

The reality is that this conversation expands far beyond just the fat people working in fashion. When Precious Lee walks out at shows – like at Versace AW22, for example – phones shoot up to the sounds of gasps and whoops. If Paloma Elsesser features on a model line-up, you can guarantee you’re going to hear a bunch of attendees discussing how hot she looked while piling out of the venue. On day one of London Fashion Week SS23, there were some truly fab shows: like KNWLS, and Chopova Lowena’s insanely brilliant runway debut. But as people settled into hotel lobbies to bash out reviews, file reports, and catch up over coffee and wine, conversation kept coming back to Vitto and how blown away everyone was by what she did – and that, I think, says it all. As Jeanie-Annan Lewin so succinctly put it: “Protect Karoline Vitto at all costs.”