Returning home after a season in Hawaii, the designer’s AW22 show was a spiritual reset for the brand and the man behind it 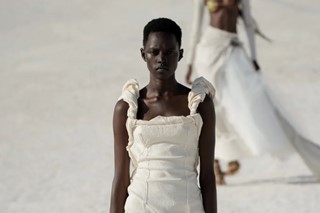 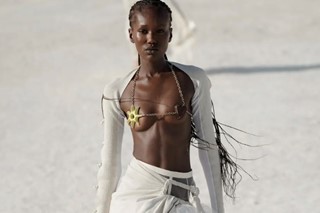 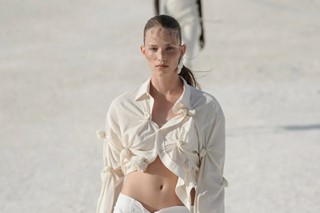 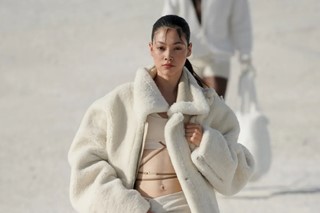 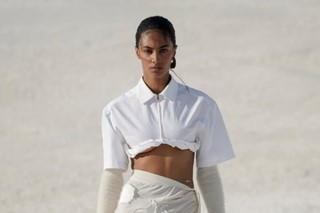 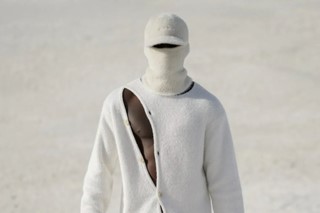 Simon Porte Jacquemus knows how to transport an audience. Where last season saw the joyful French designer swap his usual Provence setting for the far flung paradise of Hawaii, his AW22 show was a return to home both physically and spiritually – though not as we’ve ever seen before. Taking over the region’s Camargue salt plains, Le Papier emphasised the setting’s otherworldly beauty, while the collection reflected Jacquemus’ own spiritual reset in the days leading to his upcoming wedding. Here’s what went down.

Who knew salt could look so space age? Carving out his own “moon moment” among the Instagram-ready pink salt plains of Camargue, the Jacquemus runway this season was formed from mountains of the salty good stuff with caves that models spawned out of as if players in an RPG video game. Coupled with drones flying overhead and the opening dance between two male models on a revolving platform, the stage was set for a sprawling cinematic sci-fi scene worthy of Dune. As the location of the Nike collab campaign with Jorja Smith too, it’s clear: if anyone can sell fashion fantasy from a salt marsh, it’s Jacquemus.

Adding to the spice cupboard, Posh Spice herself had a front row seat to the “fun, young, French” designer she finds “always inspiring”. “I feel like I’m in a wonderful dream that I don’t want to leave,” she said in an exchange with Jacquemus post-show. The feeling is mutual: “Everyone is so happy [she came]. This morning, I woke up and all of my girlfriends were wearing Spice Girls shirts. It was so beautiful.” Elsewhere, Burna Boy, Jacquemus x Nike campaign star Jorja Smith, Bridgerton’s Simone Ashley, Richie Shazam, and internet stars Bretman Rock, Rickey Thompson, and Tefi Pessoa maxed out the star-studded #frow.

Feeling “zen” post-engagement, Le Papier was all about comfort for Simon. “I was doing very pop collections and I was not comfortable anymore. I was feeling too much colour, too pop, and I wanted to return to something softer,” he said of his aim to create something that felt comfortable, “like a grandmother’s bed.” Restarting from nothing with only a blank “white page and Giacometti” as references, this comfort appeared in enveloping tulle, revisited paper fabric textures, marriage-minded veils, off-shoulder sleep-ready padded sleeves, and desert-ready layers.

WE GOT A (SMALL) PREVIEW OF THE NIKE COLLAB

Nods to the much-anticipated Nike x Jacquemus collab dropping today were incorporated into the collection through footwear and in discrete swoosh straps that peeked from looks throughout. Driven by a desire to create something more meaningful than just a t-shirt, the partnership between the two brands is all about the long game: specifically, when Paris next hosts the Olympics. For Jacquemus it’s also all about the women: “I feel like women’s sportswear is usually menswear with different colours for women, but this time it’s not, it’s like they’re gonna feel good in it.” That’s why he says he focused on womenswear for his first Nike collection, “Except the shoes, because I wanted some myself!”

After the show is the after party, and this one took place in a crater-like structure at the top of the show space, with a central platform complete with towering light/speaker/smoke machine looming 2001 Space Odyssey obelisk-style for people to dance around as the pink sun set. Canadian producer Kaytranada graced the decks only to be joined later by Simon Porte Jacquemus himself who declared his love for the crowd still partying into the wee hours.