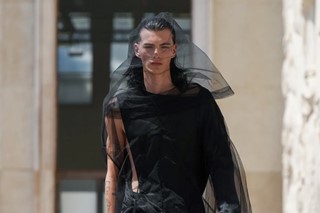 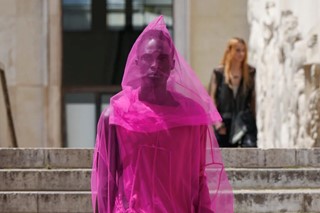 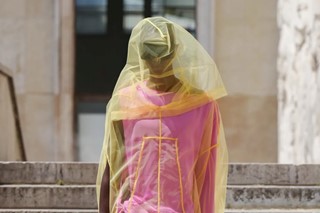 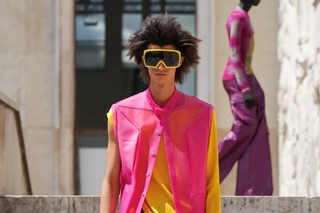 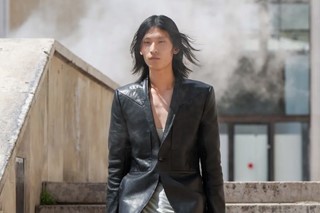 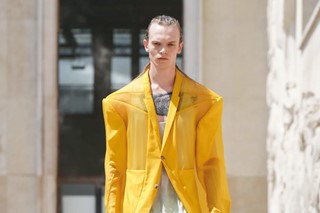 Oh, fashion! It’s a bitchy industry where everyone’s out for each other and no rivalry is as intense as that between an established legendary designer and the rising upstart ascending to steal their spot as top dog. Right? Wrong!

Cut to Rick Owens’ flaming hot SS23 runway show, which took place under the blazing sun at his usual spot, the Palais de Tokyo, just this afternoon. Alongside his standard cast of otherworldly, sometimes downright weird-looking – in the very best possible way – models, a familiar face in the form of Ludovic de Saint Sernin walked.

While de Saint Sernin walked in a fifty-shades-of-beige look that flowed out behind him in the breeze, this season’s offering was actually pretty colourful. Inspired by a trip to Egypt that Owens took earlier this year, Edfu – named for an ancient pyramid he visited while there – was punctuated by hot fuchsia and bright,  banana yellow looks, as well as glittering iridescent ensembles comprising wide-legged, extra-long flares that dragged across the ground, and shrunken tops that snatched the models’ torsos. They were, he explained backstage, “inspired by scarab beetles”, and oh to be a shiny Rick Owens beetle.

As per usual, the setting was suitably dramatic. Three men wearing protective gear stood calf-deep in the Palais’ pool where they lit huge balls on fire, before a crane drew them slowly skyward to a great height. After a few ominous seconds hanging there, each one was then dropped dramatically into the water where they fizzled out and sent a plume of ashen smoke into the air. The flaming balls represented the sun crashing to the ground over and over again, which Owens said was emblematic of humanity’s senseless mistakes which we never seem to learn from. More literally, that's something to probably look forward to in a century or so if we don’t sort things out with the little issue of the climate crisis.

As for de Saint Sernin’s appearance in Edfu, this is not the first time a designer has switched the atelier for the catwalk. In 1997 Alexander McQueen famously walked for Rei Kawakubo at Comme des Garçons, and in 1986, the notoriously shy Martin Margiela surprisingly walked for mentor Jean Paul Gaultier. More recently, Hillary Taymour of Collina Strada enlisted pal Francisco Risso to walk her AW22 show. Question is: who’s next?