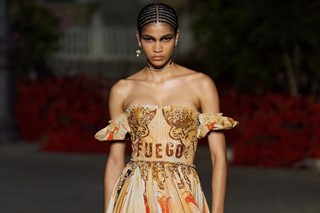 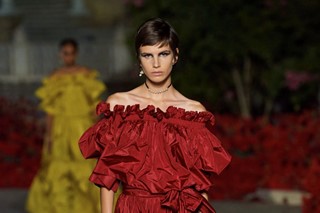 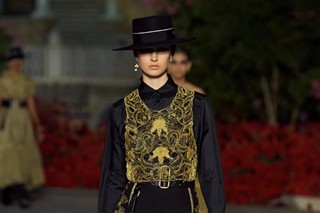 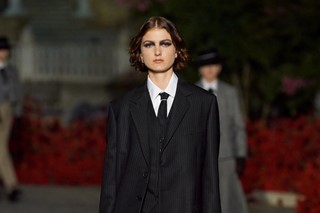 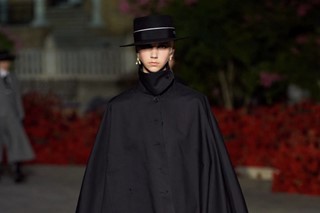 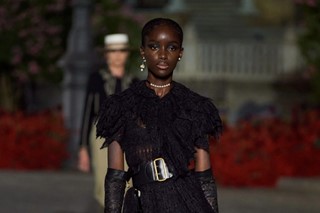 Dior’s resort show did not open with a gush of house music, but the rapping of steel-capped shoes outside the Plaza de España in Seville, where two stoney-faced flamenco dancers held court. As their taps began to swell into Rosalía’s Di mi Nombre, a phalanx of high-waisted matador pants, sombreros, Manila shawls, and equestrian uniforms made their way through the square’s arcades, which had been decked in thousands upon thousands of red carnations. Though this could have veered towards the cliché – or worse, corny – Maria Grazia Chiuri exercised constraint, even when all the nipped-in tailoring gave way to tulle prom frocks and off-the-shoulder flamenco dresses. According to the designer, it was all about paying homage to the Mediterranean woman and the heroines of southern Spain.

In other fashion news this week, people are still going on about that old ugly dress, which was apparently destroyed by Kim Kardashian, and the SS23 menswear season kicked-off in London with a stand-out collection from Martine Rose. For everything else that may have passed you by click through the gallery below.

Having unveiled his collection for AZ Factory back in April, Thebe Magugu has just released the accompanying campaign imagery, shot by Nadine Ijewere. Inspired by African parliamentary-wear, the pieces take on hybrid shapes, bold prints, and overblown, couture-like silhouettes. You can watch the video here and pre-order the collection at azfactory.com.

Following in the footsteps of Ahluwalia, A-COLD-WALL*, and Craig Green, Nicholas Daley won this year’s BFC/GQ Designer Fashion Fund, landing Daley with 12 months of mentoring and £150,000 in cash. “With a forward-thinking approach, Daley challenges the way fashion is deciphered through presentations, live performances, and films. He is a breath of fresh air and we are excited to see what the brand continues to achieve in the future,” Caroline Rush, CEO of the British Fashion Council said of the jury’s decision.

BABY’S GOT A NEW BAG

Louis Vuitton has launched its Monogram Macassar collection for the summer months, blending Virgil Abloh’s S-Lock signature with its Taurillon Monogram leather staple. In continued homage to the late designer, the maison has released pieces in orange, purple, and mint green, as a tribute to Abloh’s rainbow-thinking.

FRED PERRY PEELS BACK THE CURTAIN

Only open for another weekend, Fred Perry: A British Iconis the exhibition tracing the evolution of the brand and its enduring appeal in pop culture. From its inception in the 1950s to the Laurel Wreath’s adoption into countless subcultures, visitors will be able to explore the history of the label through rare archival material and early prototypes. Head down to the Design Museum’s Helene and Johannes Huth Gallery until June 19.

THERE’S A NEW GIRL IN TOWN

Nestled away on Eastcastle Street in Soho, OMNI is a new gallery showcasing a different solo artist every month, with a private sales collection comprising Warhol and Damien Hirst. This month, OMNI will host Lead Me Not into Temptation by Matthew McCormick, an LA-based artist whose work explores the failings of the American dream – you have until July 3 to check it out.

Julia Fox turned filmmaker this week as she uploaded two masterfully-made fashion shorts to her Instagram page. Decked in Anna Heim and Kasia Kucharska, respectively, Fox writhes, glitches, and undergoes some kind of ritualistic sacrifice – styled, of course, by Briana Andalore (read our interview with her here).

BROWNS FOCUSES ON THE FUTURE

The next chapter of Browns Focus, a spotlight-scheme for up-and-coming designers, includes Ahluwalia, Bethany Williams, FEBEN, Namacheko, Nicholas Daley, SELASI and Wales Bonner – all of whom have produced exclusive capsules in partnership with Ronan McKenzie’s HOME gallery. You can find everything from this instalment of Browns Focus online and instore at Browns East in Shoreditch.