JCDC envisioned a mish mash of treasure island-moored babes for his latest collection. 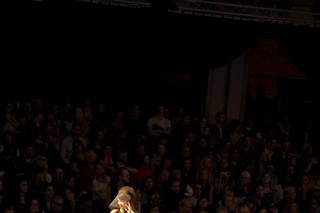 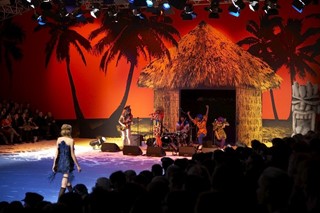 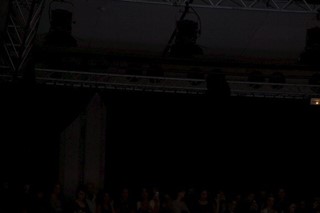 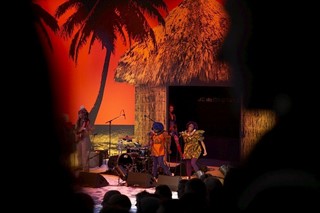 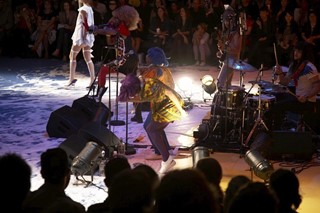 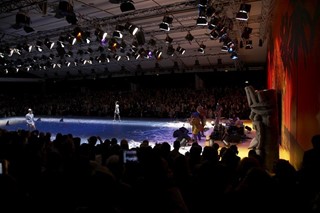 Jean-Charles de Castelbajac has purposely tried to differentiate between his mainline collection and his newly launched diffusion line and with this collection he has made strides towards making clothes that retain all those references to pop culture JCDC-style but can also be taken out of context. It was well-rounded from the simple sailor-esque white dresses and separates and the sailor printed skirts which then progressed onto more flamboyant pieces like a postcard filled PVC trenchcoat, a cute face worked into a grass skirt, a giant parrot breastplate and some raffia woven dresses that looked highly intricate. The sequinned iconic faces on dress were still there though and this time round, it was Daffy Duck, Elvis (in Hawaii of course) and Prince (who was also in the audience). Ebony Bones was this seasons' perfomer of choice and she was there with her tiki tribal troupe to drum the audience into submission.

Dazed Digital: Where did you go on holiday to get all those references?
Jean-Charles de Castelbajac: I'm watching TV! Just the TV! Treasure Island, pirates, hijacking girls, exoticism pirates. It's all about telling a story and having fun.

DD: How did the Ebony Bones performance come about?
Jean-Charles de Castelbajac: I've dressed her for two years now along with MIA, Santigold and Katy Perry, a generation of performers. Ebony contacted me and she wanted to do a show and so that's how it happened.

DD: You launched your diffusion line JCDC earlier in the month, how do you now differentiate between JCDC and your mainline?
Jean-Charles de Castelbajac: With Castelbajac I'm going to a more elegant direction with more detailing. JCDC is really pop, fun, generousand all about cartoons. I want to make Castelbjac more institutional and I want to build on that and it's the first time I've really done really feminine clothes. So I'm on my way!