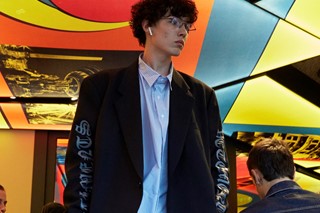 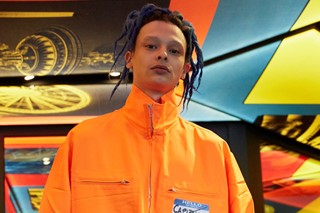 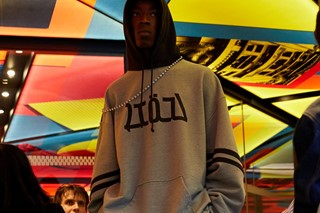 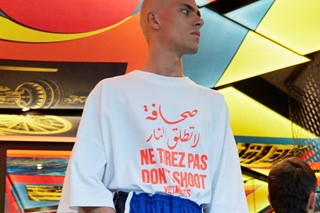 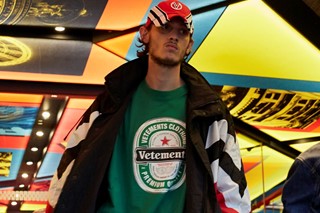 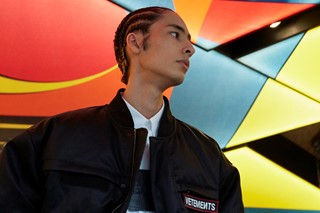 Back in January, Demna Gvasalia took us for a night at the museum, as he presented his AW19 Vetements collection among the stuffed giraffes, lions, and monkeys at Paris's Muséum national d'Histoire naturelle, and paid tribute to the punks of 2019: the internet nerds. Despite that one feeling like it was approx. 4 seconds ago, tonight we got to see what the game-changing designer’s got in store for us come SS20. Strap in.

THE INVITE WAS A CONDOM

...in a black wrapper (there was pink too) featuring the label’s unmistakable logo. What’s that noise in the distance? Oh, probably just a small stampede as 489,847 fuckboys rush to log on to eBay in a bid to score themselves one (at a ridiculously jacked-up price) – nothing to worry about.

IT TOOK PLACE IN A MCDONALD’S(!)

...where milkshakes and Cokes – but sadly no nuggets – were offered to guests as they arrived and took their places at the restaurant’s tables and in its booths. Fun fact (depending on your definition of fun): the McDonald’s referred to as the coolest in the world is actually situated in Batumi, Georgia, aka Demna’s home country.

The second model out on the runway appeared wearing a Vetements-ified McDonald’s uniform with a name-badge that read ‘Capitalism!’ pinned to his chest. We know, we know: criticising the capitalist system is a bit rich coming from a brand that deems £500 an acceptable price for a hoodie. As is usually the case when it comes to Vetements collections, though, the look came with the hint of a raised eyebrow and what felt like a heavy dose of irony. Insert wink emoji.

Where for a while Vetements and Balenciaga felt close to indistinguishable, over the course of the last couple of seasons the former has started to veer back into its own lane – with tonight’s show feeling particularly full of renewed energy. If Balenciaga has basically always been the cool, knowing older sibling, then Vetements is back to its best as the rebellious, cynical, slightly bratty kid brother or sister who’s angry at and tired of the world (as well as the fact their parents won’t lend them £500 for the aforementioned hoodie).

THE COLLECTION WAS V VETEMENTS

As ever, Demna took tropes we’re all familiar with and twisted them on their head, as security and fast food employee uniforms were exaggerated and subverted, tailoring and sportswear styles reached their usual XXL proportions, and household brand names were once again given new context within the collection: with the likes of Bose, Vodafone, Heineken, PlayStation, and Internet Explorer (which became ‘Ecstasy’) among them. Elsewhere, models in padded overcoats with Norwegian death metal-inspired corpse-painted faces and others wearing panelled bike leathers, muscle vests, and boxy bombers stormed round the runway. Accessories included ear pods, a go-pro, and, in one case, a portion of fries.

Just as we expected: if Demna has anything to do with it, they’re going to be everywhere very soon. Resistance is futile.