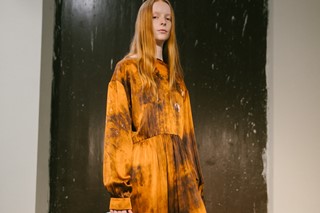 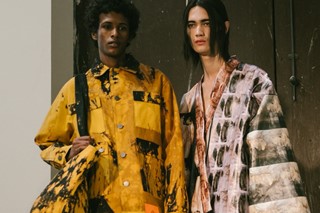 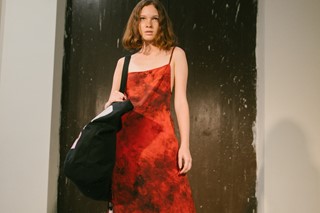 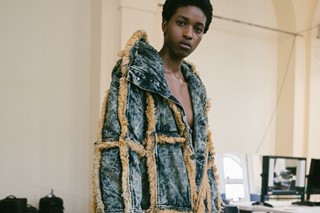 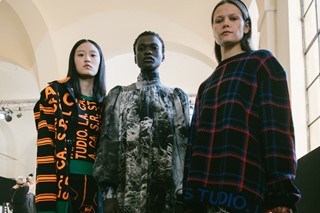 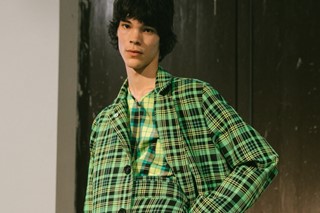 Last night in Florence, Sterling Ruby debuted his much-anticipated label S.R. STUDIO. LA.CA. as a special guest of Pitti Uomo. With Raf Simons in the audience and a cast of friends and family on the runway including Simons’ long-time right hand man Pieter Mulier, it was the culmination of decades of textile experimentation in art, several seminal collaborations with Simons as part of his own label and both Dior and Calvin Klein, and Ruby’s personal history of making clothes for himself – which dates all the way back to when he was 13 and his mum bought him a sewing machine as a present.

Asked about making fashion versus making art post-show, Ruby explained he didn’t see it as being any different than doing a painting or a sculpture, adding: “In a weird way I kind of find it more liberating. Not that I mind that someone has an artwork or has a painting and hangs it on their wall, but it’s fun to think of something being worn out into the world and moving, and that other people can see.”

Ruby showed his first collection as exactly that: a collection of things, concepts, and ideas, all joined together under the umbrella of his California studio. The label contains four different lines: there’s the main line, S.R. STUDIO. LA. CA. Then there’s ED 50, a rotating limited edition of pieces produced in quantities of 50. The SOTO line covers garments made with fabric handworked by Sterling Ruby Studio in numbers determined by the amount of fabric available. And finally there’s UNIQUE, which are one-of-a-kind pieces designed and made by Ruby’s own hand.

When it came to the runway show itself, the lines were mixed “instinctively, democratically, without hierarchy”, with the final two looks both taken from the UNIQUE line. Viewed as a whole, they had all the hallmarks of Ruby’s catalogue of work: workwear echoes of his 2016 exhibition of acid-bleached and paint-splattered denim at Sprüth Magers in London, pieced-together garments nodding to his collage methods and post-punk wording borrowed from seventies books on pow-wows. Elsewhere, work by his wife, the photographer Melanie Schiff, was blown up on silk while the artist’s own sculptures were transferred onto shirts and trousers and other garments as well: flag candles and jarring animal skulls in wigs.

Held at Le Pagliere behind the Boboli Gardens, a former hay barn for livestock, the venue fed into the collection’s autobiographical and hyper-American narrative, tracing Amish and Mennonite dress, folksy patchwork and quilts, rural crafts, metal and punk album cover art – basically Ruby’s journey from Pennsylvania kid right up to the point he became a Los Angeles-dwelling artist.

The space was complete with scattered galvanised tools, as inspired his time working in construction and tomato-harvesting, as Ruby offered commentary on the relationship between man and nature. while, elsewhere, as demonstrated on one bag, Ruby’s screen print ‘endocannibalism + exocannibalism’ took on new meaning, referencing fashion’s endless overconsumption, its continuous regurgitation or ideas, and questioning whether the industry as a whole is in fact eating itself.

It’s for this reason that we probably won’t see Ruby doing the seasonal cycle when it comes to his new line: “I don’t really have any interest in following seasons per se. We’ll see when we get back to LA and we start to break down our studio and rebuild it again and see what lineage we take next,” he explained. Visibly elated, he noted that he’d really enjoyed the process of working on the collection. “All the different facets and interdisciplinaries and different modes of production.”

The show was a post-postmodern modern, demonstrating that the medium isn’t the message. Rather, Ruby’s message carries across any medium he puts his hand to.