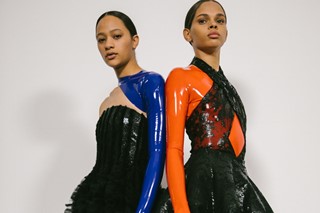 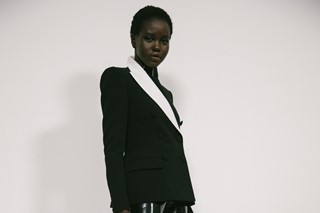 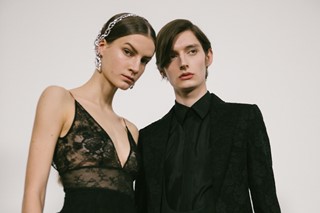 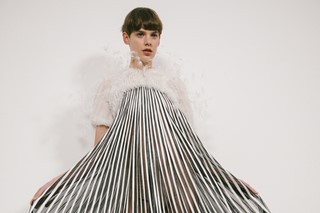 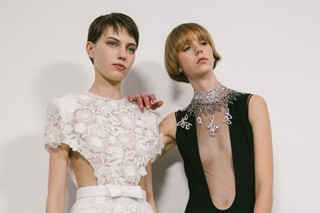 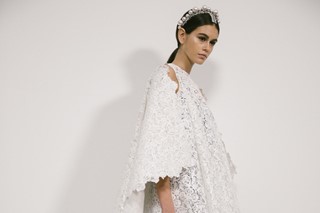 Tonight, in the middle of an unexpected snowstorm in Paris, Clare Waight Keller staged her own white-out with her SS19 Givenchy Couture show. From a subversive latex collaboration, to some futuristic (and functional) accessories, here’s everything you need to know.

THE THEME WAS BLEACHED CANVAS

Which reflected the showspace’s stark, all-white decor; panels covered in canvas lined the walls, while guests sat on optic benches laid across the shiny white floor. The show took place in the Musée d’Art Moderne, which had been cleared of its paintings for the occasion. Waight Keller explained she had wanted ‘a blank canvas’ when it came to tonight’s presentation.

...BUT THE COLLECTION HAD SOME SERIOUS COLOUR

In contrast to the all-white backdrop, the British designer sent a series of bold looks down the runway: in shades of fuchsia, yellow, blue, and orange. One dress appeared to be made of thick rubber strings in a kaleidoscope of colour, while other brightly coloured accents were added through feather trims, jewelled headdresses, and beaded capes.

THERE WERE ATSUKO KUDO LATEX PIECES

Atsuko Kudo are the legendary London latex makers responsible for squeezing everyone from Madonna, Naomi Campbell, and Beyoncé into their high shine designs. As part of tonight’s show, models including Sara Grace Wallerstedt, Adut Akech, Anok Yai, and Kaia Gerber took to the runway in shiny latex leggings and heels, and skin-tight bodysuits – some of which were worn under structured lace dresses and sharply tailored capes, which lent the show a slightly kinky, fetishistic edge.

THERE WERE COUTURE BACKPACKS

Yep, you heard correctly. As some looks came down they runway, it appeared they had big bows attached the the back, but as the models walked past, they were actually revealed to be big, couture backpacks which were strapped on over dresses and bore the Givenchy logo. Otherwise, accessories were kept to a minimum, which added to the clean, futuristic mood of the show. Bravo Clare! See you in a few weeks for AW19.