The curators of the recently opened “Fashion & Politics” exhibition at the Fashion Institute of Technology’s Museum take Dazed Digital behind the scenes. 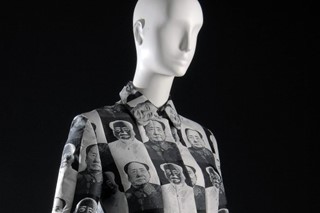 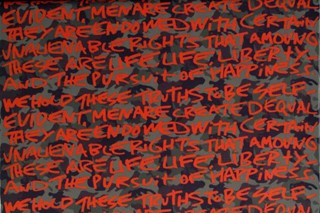 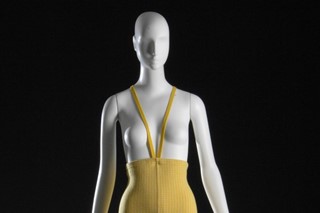 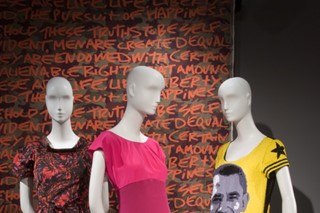 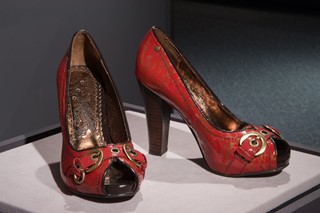 The rich robes of kings and queens, their extravagant headwear and their accessories and jewels represented “status clothes”, a way to show people how powerful they were. When political propaganda didn’t formally exist, human beings used sartorial propaganda to promote themselves. Little by little as the decades and centuries passed, fashion and politics established indissoluble links one with the other. An interesting exhibition at the Museum at the Fashion Institute of Technology  tries to explore how fashion and politics influenced each other over 200 years.

“Fashion & Politics” doesn’t actually relate to the focus on political ideologies and social values as expressed through fashion, but it has more to do with the maneuverings of participants in the political arena, the exhibition co-curators Jennifer Farley & Melissa Marra highlight. The pieces exhibited – clothes, textiles and accessories – help the visitors to realise how fashion has been influenced by political choices and social changes, yet they also tackle further issues such as class, feminism and identity.

The exhibition features rare pieces from the 1800s such as reticule bags originally used as purses with embroideries spelling out the words “Guerre de Sucre” (Sugar War), a reference to France and Britain’s war against the Caribbean and West Indies over the sugar trade. Suffragette looks are explored and Rosie the Riveter-like jumpsuits and woollen skirt suit uniforms designed by couturier Mainbocher for the female U.S. Navy officers are also on display.

One of the main galleries is dedicated to American nationalism and strikes interesting comparisons between garments and accessories from different eras such as a 1889 stars and stripes cotton printed dress, Catherine Malandrino’s chiffon flag-print shirtdress - a fashion hymn to freedom that turned after 9/11 into a wearable symbol of patriotism - and flag-themed sandals by La Valle from the late 30s-early 40s in red, white and blue leather with metal studs. Propaganda is introduced via a white cotton dress with a red “IKE” print from the 1956 Eisenhower Campaign and paper stars and stripes mini-dresses, almost homages to the Pop Art movement by Mars of Asheville and James Sterling, worn by supporters of Richard Nixon and Hubert Humphrey.

Social revolutions are remembered via Rudi Gernreich’s “Monokini”, a topless bathing suit in yellow and white wool from 1964 that soon became a symbol of liberation for many modern women. More international issues such as China opening up to the rest of the world, are introduced with Vivienne Tam’s 1995 “Mao” suit, featuring a checkerboard pattern with prints of the former Chinese Communist leader.

Contemporary pieces are instead represented by Stephen Sprouse’s graffiti-like Declaration of Independence print in bright orange on green and brown background; Thakoon’s kimono dress in silk radzimir worn by Michelle Obama on a state visit to France; a version of the Jason Wu’s silk sheath Michelle donned for her Vogue cover; Jean-Charles de Castelbajac’s iconic sequinned dress with a portrait of Barack Obama and even a pair of red Naughty Monkey shoes similar to the ones Sarah Palin wore for the Republican National Committee.

Dazed Digital: What inspired this exhibition and how long have you been researching it?
Jennifer Farley & Melissa Marra: We have been researching this topic for about eight months, and were initially inspired by the recent presidential elections and all the attention to the campaigns. However, when we began discussing the topic further, we realized that the concept of politics as expressed through fashion had a long history and went deeper than just election t-shirts and the sartorial choices of politicians to encompass cultural change, sexual codes, and social progress.

DD: How many items are featured in the exhibition and do they come from all over the world or just from the USA?
Jennifer Farley & Melissa Marra: The exhibition features over 70 looks as well as additional accessories and textiles. While a large number of the pieces come from the US, we also have pieces from other countries such as China, Mexico, Denmark, Italy and France. The exhibition has been open for about two weeks, and so far the feedback has been very positive: it seems to be a subject that resonates with our audience.

DD: Which are your favourite items in this exhibition and why?
Jennifer Farley: One of my favourite pieces in the exhibition is a sequinned mini-dress by French designer, Jean-Charles de Castelbajac. The dress is emblazoned with a Pop Art-style portrait of President Obama. The back of the dress reads, “I have a dream today!” referencing the words of Martin Luther King Jr. and underscoring the historic significance of the moment. Castelbajac said that he views Obama as representative of hope and change and finds him to be the most charismatic leader in politics today.
Melissa Marra: One of my favourite pieces featured in the exhibition is a silk chiffon dress printed with repeated images of the American flag from designer Catherine Malandrino’s Spring 2009 collection. This iconic dress first debuted in 2001. Post 9/11, when the American flag held heightened associations of strength and unity, the Flag dress was worn by many celebrities and socialites as a show of patriotism. The style was recently reissued in honour of the 2008 elections, and was seen worn by such notable women as Meryl Streep and Heidi Klum.

DD: According to you, what’s the kitschiest item exhibited?
Jennifer Farley & Melissa Marra: A colourful cotton furnishing fabric from around 1969 featuring astronauts standing proudly on a stylised depiction of the moon. Behind the astronaut is a lunar lander and beside him is a small American flag. The saturated colours of the textile give it an almost cartoon-like quality. Still, it bespeaks the importance and cultural influence of the “space race.” Americans considered the 1969 moon landing a victory.

DD: Does the exhibition chronicle what could be defined as the aestheticization of politics, that process according to which politicians have become more careful about what they wear and how they look?
Jennifer Farley & Melissa Marra: Not to that extent. The exhibition does touch upon the idea of the fashionable first lady. We include an Adolfo evening ensemble worn by former First Lady Nancy Reagan and two versions of dresses worn by Michelle Obama. The first – by Thakoon – is the style that she wore to the Democratic National Convention and Jason Wu has made us a replica of the dress she wore on the cover of Vogue.

DD: What has this exhibition taught you about fashion and politics?
Jennifer Farley & Melissa Marra: It has given us insight into the broad definition of the word politics and its expression through the medium of fashion. More than just campaign buttons, election t-shirts or the sartorial choices of politicians, politics in fashion encompasses a range of social issues, including youth movements, feminism, nationalism and class.

DD: Fashion could be considered as a form of political propaganda, would you agree with this statement?
Jennifer Farley & Melissa Marra: At times it can function as propaganda – often we see this in pieces related to political campaigns or to wars. In our exhibition, we feature a number of scarves that function in that way, including a “RFK” (Robert F. Kennedy) scarf from the 1960s by Oscar de la Renta, an anti-prohibition “Repeal the 18th Amendment” scarf and several Allied propaganda scarves from WWII.