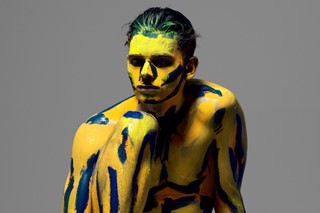 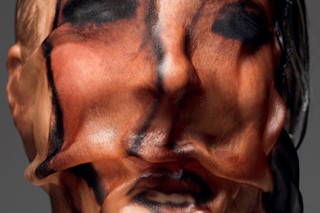 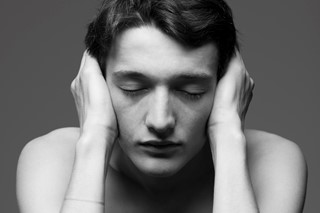 Photographer Pierre Debusschere is well-known for his fashion editorials. The Dazed contributor has worked with designers including Raf Simons, Louis Vuitton, and Dior Homme, captured the likes of Michele Lamy and Die Antwoord for the pages of the magazine, and created music videos for Actress and Beyoncé. For the most part, his subjects are usually seen wearing clothes – that is, until now.

This weekend Debusschere debuted his first solo exhibition, UNcovered, at Brussels MAD showspace. Featuring 90 original pieces and a unique audiovisual installation, it documents a series of models who stripped off and stepped out in front of the photographer’s camera, exploring what it means to ‘uncover’ and the intimacy of removing the garments you wear.

“When I started working on UNcovered, I was thinking about the idea of protection, about intimacy, and layering, and about how we choose to show our bodies,” he explains. “Every person I shot came over to my studio, took a blanket and went into a private room to undress. Allowing the subject space was something that was really important to me, so in my mind, the blanket connected to an emotional memory and to safety.”

In some of the works, this amounts to a set of toes or a glimpse of hair peeping out from the corner of the fabric, while in others all inhibitions are gone and the blanket is cast aside and forgotten on the floor. “It was my wish that people would only show as much as they were truly comfortable with. There’s a lot of skin in the photographs that make up UNcovered, but it doesn’t feel voyeuristic or sexual to me, it feels quite tender and soft. The ones in which the models are almost completely covered are actually more sensual I think. There’s a tension there, which is interesting to me.”

Many of the those seen in the works had never participated in anything like this before, and were cast either on the streets of Brussels, found on Instagram, or turned up at the house party where Debusschere had set up a studio. “We were there until 7 in the morning, it was a very weird experience,” he laughs. “We actually kept one of the original photographs from that session in the exhibition, though, because I liked its rawness.” In it, only the model’s silhouette can be seen, as he crouches on the floor with a blanket over him. “We’ve all been there,” jokes the photographer. “Maybe he didn’t like the music.”

“It was my wish that people would only show as much as they were truly comfortable with. There’s a lot of skin in the photographs that make up UNcovered, but it doesn’t feel voyeuristic or sexual to me, it feels quite tender and soft” – Pierre Debusschere

Also adding a protective layer to subjects was oil and acrylic paint, which Debusschere used to make markings on models’ bodies in colours that represented light and shadow, as well as rolls of fabric which he swathed about a number of individuals. It was, he explained, a way to keep a connection to his work in fashion, albeit in an unstyled way.

This desire for rawness was seen in other aspects of the works, too. Where Debusschere is known for his sometimes heavily retouched and manipulated imagery, he wanted the works that make up UNcovered to remain largely unchanged, apart from a series of distorted faces encased in highly polished chrome frames. “The protection for this particular subject came from the layers of distortion, and the way that they had been edited so it almost looks like they’re wearing a mask,” he explains. “I was thinking about contouring and how that’s been embraced the last few years.”

Also on his mind were the decorated ceilings of religious buildings, from where the idea for the exhibition’s film installation came from. Set in a darkened room in a space at the centre of MAD, visitors are encouraged to lie on a platform under a screen – surrounded by the blankets like those worn by the models featured in the show – to watch a 16 minute-long original film in which a number of models interact with each other, reciting intimate prose as they move.

“I wanted there to be this unique, physical experience within the exhibition,” Debusschere says. “The music is inspired by a heartbeat, and the bass under the platform is turned up very high so it reverberates through the viewer’s body. The screen is very low, and very close to you, too, which again was all about this feeling of protection.” The film finishes with James Massiah’s spoken word piece You Ain’t Gotta Go Home, which acts as an interlude to what is an intense, emotional experience.

The exhibition isn’t necessarily the last of Debusschere’s exploration into intimacy and protection. A year in the making, UNcovered, in his mind, could well be an ongoing series. “I chose to show in Brussels as I was excited about moving back here from London, there’s a lot going on,” he says. “But it’s something I’d like to take to other cities, perhaps, in the future.” Look out for him – and his camera – at a house party near you.

UNcovered is now open at MAD Brussels and runs until September 30. Entry is free.