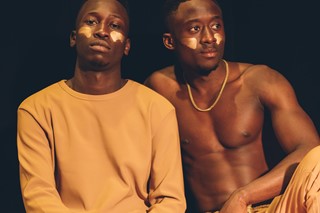 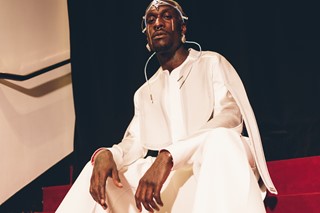 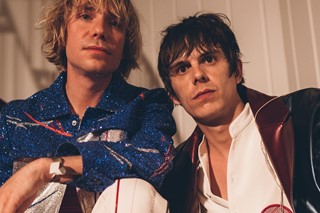 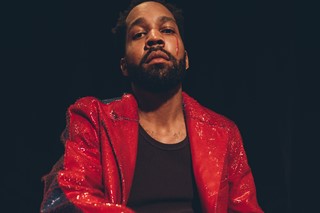 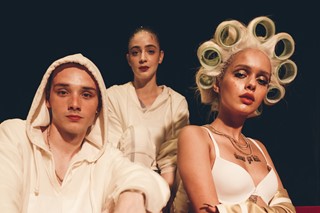 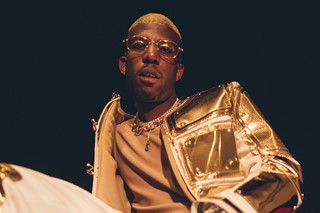 Paris Fashion Week is now well underway, with the likes of Rick Owens, Raf Simons, and Virgil Abloh (twice!) all presenting their SS19 collections. Next up, was Pigalle’s Stéphane Ashpool, who decided to take things in a different direction to the traditional show format. Here’s what went down.

FIRST OF ALL, IT WASN’T A RUNWAY SHOW

Pigalle designer Ashpool presented his previous collection in a dance school as a tribute to his mother and close collaborator Doushka, a native Serbian who had stints dancing as a ballerina and performing at the Moulin Rouge. This time, he took things one step further, putting on a musical extravaganza in Salle Pleyel, a 2000-seat concert hall minutes from the Arc de Triomphe. Personally directed by Ashpool, the show moved between music and contemporary dance, offering a fully-rounded insight into Pigalle’s USP.

IT WAS A CELEBRATION OF HOMEGROWN TALENT

Titled Sound of Paris, the collection was a celebration of the French capital’s dynamic creative scene, featuring the likes of Bonita, Bonnie Banane, Ichon and Muddy Monk – and that was just the music. The show also featured actors, dancers, and an orchestra. For evidence of Ashpool’s genuine love of his hometown, you only had to look around – the auditorium was packed with fans of the label and the community that has evolved around it.

A SEASONED MC STOLE THE SHOW

Hats off to Larry V, who came out in a feathered fedora and a silver three-piece suit and encouraged the already rowdy audience up on their feet for a singalong moment. Ordering everyone to throw their hands up in the air, it took a long-time professional to really get the crowd going. Larry (who we learn is an icon for a younger generation of Parisians) spent the whole set clutching his briefcase that was also, inexplicably, lit up from the inside – just one of the bonkers moments that made the show a riotous spectacle.

THE CLOTHES TOOK US ON A SPACE ODYSSEY

Naturally the outfits were also designed by Ashpool, and they offered an intergalactic twist on Pigalle’s codes. While Parisian rapper Ichon delivered a barnstorming set flanked by dancers in sunflower yellow sweatshirts and drop-crotch trousers, it was the guitar-wielding duo Papooz who came out in possibly the best outfits of the night, between them rocking a glittery bomber with a distinct flavour of Bowie and a knee-length maroon silk robe that had an appropriately extraterrestrial rockstar vibe. Beam me up, Stephane.

THERE WAS A COLLAB WITH BEATS

With the night being all about music, it was no surprise that Ashpool teamed up with Beats by Dr Dre to create a special collection of headphones. No matter where you were sitting in venue you will have spotted them. The first pair: glitter-covered in silver and red, to match the Beats logo. The real showstoppers though were the pair that were sprouting a variety of blue feathers. The combination of music and style.

As a friend of the label, Ashpool collaborated with the footwear brand to create five custom styles of the Chuck 70 in different colourways. The shoes will be released in a hyper-limited run in conjunction with The Sound of Paris.

IT WAS TESTAMENT TO THE POWER OF MAKING FASHION DEMOCRATIC

Where most fashion week seating plans revolve around a rigid hierarchy of power players, Pigalle’s show worked in reverse. The entire auditorium was given up for attendees to seat themselves as they wished, and you were just as likely to be sitting next to a superfan of one of the acts performing as you were a fashion editor. In the same spirit of Virgil Abloh inviting thousands of art students to attend his debut Vuitton show earlier in the day, it was a cheering insight into the future of fashion. As streetwear continues to storm high fashion’s Bastille, it’s time for big brands to open their doors and loosen up. When it’s this much fun, why wouldn’t you?