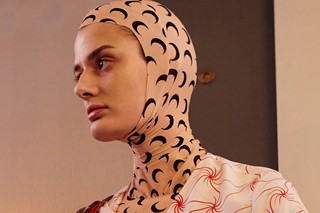 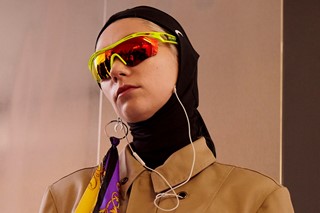 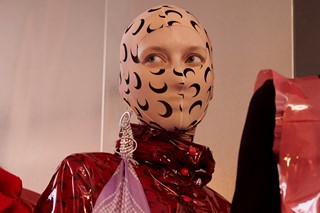 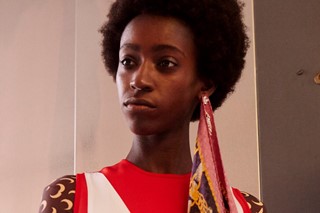 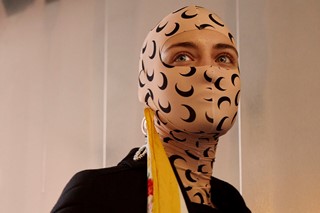 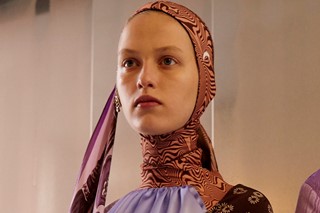 It’s hard to believe that, until a few months ago, Marine Serre had been working out of her tiny Paris apartment as she – like many creative young people just out of education – balanced two jobs. Having graduated from Belgium’s prestigious La Cambre in 2016, not only was Serre working under Demna Gvasalia at Balenciaga by day, at night she was trying to keep up with the demand for her designs in her ‘studio’ (“my living room” she laughs over the phone) with help from her boyfriend and sister.

In an incredibly short space of time, the designer has achieved recognition some work years for. Lauded for her intelligent, progressive references, deft use of colour and unique construction methods, her graduate collection Radical Call For Love drew on her experiences of living in Belgium and Paris in the aftermath of the terrorist attacks of 2015. Describing her work as “an ongoing exploration of form and function”, it comprised draped tunics and fluid dresses with distinctly athletic flourishes and crescent moons reminiscent of Islamic motifs throughout (though she’s quick to point out this was not a political statement).

Radical Call For Love won her the prestigious LVMH Prize last summer, and, with the €300,000 cheque that came with it, Serre has been able to set up what she calls a ‘proper studio’. “We moved here in November and we do everything here now. We design, we have a showroom, and we even do a little of the production here. There are about ten of us on the team. So it’s a big change, and much easier now than it was working in my living room!”

She also left Balenciaga around the same time, having spent a year working as a design assistant there. “It was amazing to work at such a big house, and such an invaluable experience as someone just setting out in her career. I learnt so much,” she explains, “not just about designing garments and production, but also about how a company functions. I mean, of course, my brand is much smaller, but it gave me such a great starting point.”

“I don’t think I’m the kind of designer that’s meant to be confined to the showroom. What is important for me is to talk to people about what I’m doing, to see people dressed in the garments” – Marine Serre

Following on from SS18’s Cornerstone collection, today marks the designer’s first catwalk show, as she makes her debut at Paris Fashion Week this morning. Understandably, she’s a little nervous. “We weren’t really expecting to do a show this season,” she explains, “but I’m happy that we are. There’s a great vibe in the studio, and anyway, I don’t think I’m the kind of designer that’s meant to be confined to the showroom. What is important for me is to talk to people about what I’m doing, to see people dressed in the garments. I partly decided to study fashion because of Alexander McQueen, and he was quite the showman, wasn’t he? (laughs) So I’m excited.”

The collection itself, this season entitled Manic Soul Machine, further explores Serre’s hybrid-focused design codes as it fuses feminine silhouettes with utilitarian detailing. Present again is the lycra fabric that allows the wearer unhindered movement, this season crafted into slim leggings, skin-tight scuba-style tops and protective balaclavas that closely encompass the models’ heads. The same fabric also collides with rigid denim to create protective jackets, while functionality comes in the form of a multitude of pockets of varying sizes across garments of all descriptions. The crescent moon, now Serre’s signature motif, is omnipresent too. Like many emerging designers, Serre isn’t designing for the sake of creating an attractive dress. Instead, her ‘FutureWear’, as her team refer to it, is designed for an uncertain future that will see function overtake form in terms of desirability and necessity.

Also key to the designer’s ethos is sustainability, something that is so integral to her work that it’s become second nature to her. “You know, in fashion we overproduce by a huge amount. Whether I make my collection from recycled or reclaimed material, or completely new fabric, at the end of the day, the design and the originality of the finished garment will be exactly the same, so why wouldn’t I go for the sustainable silk, or cotton, or whatever?” she tells us. “I don’t want to contribute to the huge amount of pollution that’s taking over the world, and I don’t think I or any other designer really needs to. If it continues, there won’t be anyone to design for anyway.”