The Belgian designer’s AW18 collection included overt references to narcotics – but does he risk glamorising their use? 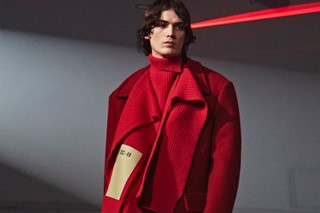 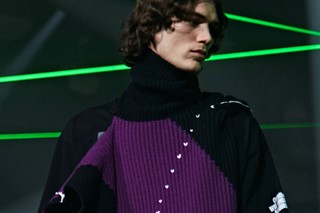 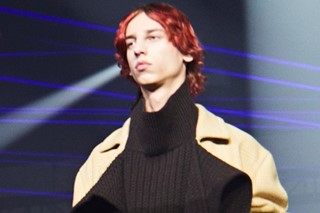 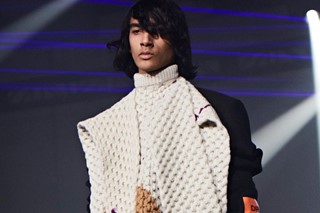 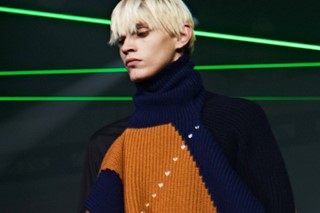 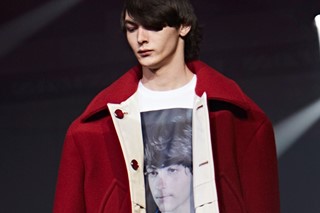 Earlier this week in New York, designer Raf Simons put on his AW18 show. As music pulsed and coloured lights shot across the space, models walked out in a collection which Simons said was heavily inspired by cautionary tales about chemical entanglements. One was Christiane F., a German book and film based on a true story about a 14-year-old girl who turns to sex work to fuel her addiction, while another was the tragicomedy Drugs by Cookie Mueller and Glenn O’Brien. Portraits of Christiane as played by Natja Brunckhorst, as well as the play’s title, appeared alongside explicit and coded references to particular drugs: the phrases ‘LSD’, ‘XTC’, ‘GHB’ and ‘2C-B’ decorated patches, referring to substances “with their own specific generational and (sub)cultural associations.”

According to the press release, the designer “(sought) to neither glorify nor condone the culture(s) of drugs”. Instead, Simons’ intended “to consider the persistent, almost ubiquitous presence of narcotics (prescribed or otherwise) within our society and acknowledge our often conflicted relationships with them.” But does the collection – part of the proceeds from which will go to organisations that support addiction recovery – risk glamorising what it seeks to warn against? Two writers weigh in.

The concept of drug use and substance abuse is dense, emotional, and difficult to navigate. It’s not something you’d expect to see on a mood board for a high-priced fashion label. After all, addiction isn’t a trend, a colour, nor a fabric for fashion designers to play with – and at the very least, if used thematically, it’s something that should be approached with sensitivity and trepidation. Over 42,000 people in the United States died from opioid overdoses in 2016 and the Center for Disease Control believes the drug’s fatalities won’t be declining anytime soon. So when Raf Simons decided to include drugs as a theme and a design motif in his AW18 collection, he had to have known he was playing with tense subject matter.

The clothing itself was masterful and instantly-recognisable as Simons’ handiwork: broad-shouldered jackets, graphic T-shirts, chunky knit sweaters, and off-kilter trench coats. In an interview with the Business of Fashion, Simons credits the grim 1981 biopic Christiane F. for inspiring him to avoid using drugs. But the gripping and emotional backstory of the title character’s struggle with addiction didn’t get sent down the runway, pictures of her face and clothing emblazoned with the word ‘drugs’ in bold capital letters did. And against the backdrop of an unprecedented opioid crisis in the United States, with drugs becoming more powerful and easier to access, the fact that a fashion collection would reduce drug usage and addiction into printed sweatshirts and scarves, to me, feels wrong.

The press release quoted in the introduction to this article doesn’t exactly feel like an impassioned plea from an artist about the perils of addiction, and goes on to mention Simons’ hope to open up “a more nuanced dialogue around the implications for a society where addiction and the causes of addiction remain largely taboo subjects.” While the good intentions are clear (hence the donation of an undisclosed percentage of profits), the idea that an upscale fashion collection will spark actionable change with today’s youth is wildly optimistic at its best and delusional at its worst.

“Against the backdrop of an unprecedented opioid crisis in the United States, the fact that a fashion collection would reduce drug usage and addiction into printed sweatshirts and scarves, to me, feels wrong”

In 2016, Kanye West was photographed outside his Yeezy Season 2 zine launch back wearing a ultra-distressed denim jacket with “Hollywood Dope Fiends 4 Ever” haphazardly scrawled across the back. Photos of the garment soon hit the internet, but the backstory remained a mystery to anyone who didn’t recognise it. It was a replica of a jacket owned by a mysterious and drug-addled teenager named Tweaky Dave, who was immortalised via the work of American photographer Jim Goldberg. By the time West wore it any mention of Dave, his struggle with addiction, or his life on the streets had disappeared.

When Simons’ drug-inspired merchandise finds itself on the backs of celebrities, fashion editors, and influencers, it is almost certain that his well-meaning intentions will be nowhere to be found. The high profile wearers of Raf Simons – A$AP Rocky, Frank Ocean, Future, Justin Bieber, Lil Uzi Vert – will inevitably seen and photographed wearing pieces from this collection. (Many of these men are musicians with lyrics that oscillate between loops of drug confessions and grandiose braggadocio.) Whether Simons likes it or not, his fashion occupies a space within a culture that has a history of glorifying drug use. The wide eyes of impressionable teenagers that worship the music and image of these celebrities will just see ‘drugs’ and the RS label; they won’t see Christiane’s life story or Simons’ thoughtful accompanying written statement.

Christiane’s story deals with the isolation, anxiety, and despair that haunt many addicts and alcoholics, but according to the real woman herself, many young people found it glamorous or romantic. Perhaps the raw emotions at the heart of her book would have made for more compelling and thought-provoking fashion. It’s not that a creative mind as lauded as Simons’ is expected to broadcast PSA-like messaging in his work, but if you choose to play with such a prickly theme, you have an obligation to treat it with more thought than I think this collection did. To see such a complex and harrowing life experience distilled down to a single five-letter word in bold text on the front of a hoodie shows a lack of conscience that does not mesh with Simons’ legacy to date.

It’s unlikely Simons will be providing supplemental documentation or an explainer with his clothing like the publishers of the Christiane F. book did (handed to teachers and parents, it contained information about dealing with teens who found the story to be more seductive than offputting). And nor should he – no artist should have to include asterisks and footnotes with their work. But the millions of people who suffer from substance use disorders deserve more than a sweatshirt that simply says ‘drugs’.

NO – WE NEED TO TALK ABOUT THE OPIOID CRISIS

The Raf show confronted an ancient past-time and modern phenomena: drugs, specifically the opioid crisis that has besieged America. It’s a plague that is decimating communities and is being discussed by everyone from the president to pop culture auteurs. Nan Goldin recently opened up about her addiction, condemned the billionaire Sackler family who manufacture Oxycontin and launched a recovery group for addicts. Sean Baker, who directed The Florida Project and Tangerine, announced that his next film will zero in on the opioid epidemic. Raf Simons, adamant that the collection did not glorify drugs, will give some of its proceeds to organisations that support recovery. People are talking, but Simons is right when he says that “the causes of addiction remain largely taboo subjects”.

Addiction is omnipresent and drugs are no longer the preserve of the cultural elite, or the scourge of the streets. They’re in quiet, remote parts of suburbia, too, the kinds of places which have long fascinated Simons. In fact, a legitimate criticism of America’s handling of the crisis is that panic buttons were only pressed when the white, middle classes started to fall. Either way, opioids are increasingly hard to ignore. So Raf didn’t, via beautiful, idiosyncratic silhouettes and yes, a yellow sleeveless hoodie with the word ‘drugs’ emblazoned on the front of it, lifted from the cover of Cookie Mueller and Glenn O’Brien’s play of the same name.

The Belgian designer has, slightly bizarrely, become an icon in rap – a genre that has battled an affliction with downers in recent years, from lean to Xanax. No longer are rappers talking about just selling drugs, they’re rapping about doing them, which in and of itself has become an aesthetic, the leaned-out, quasi-nihilistic drawl of Soundcloud “Lils”. Some of 2017’s biggest rap hits contained overt drug references. But things are changing fast. After the tragic death of Lil Peep, aged just 21, Lil Xan announced that he was changing his name. Lil Uzi Vert promised to quit drugs and Smokepurpp said he was “leaving Xanax in 2017” (a post screengrabbed by Travis Scott and captioned with “this makes me happy”). Crucially, very public discussions are taking place and it’s actually perhaps Raf Simons’ position as a style demi-god to many rappers that makes him well-positioned to produce a collection like this – he likely knows they are listening.

It was intriguing to see a designer confront a social issue in such stark fashion and strive to place his work firmly within the world – the industry can operate within a bubble that feels impenetrable to outsiders and whose insiders don’t always want to look out of. As we know, fashion is an art form that prides itself on boldness but certainly doesn’t get political, break ranks or rail against injustices as much as it could.

Here, Simons had a very clear message, one delivered via the subcultural mediums that are his staple while channelling the excess and abandon of adolescence. Teen addict Christiane F. is hardly a poster girl for glamourous heroin chic, more a warning of where it can go wrong. The hoodie with ‘drugs’ on it also nods towards the countercultural history of NYC, where the show was taking place, and specifically two people who were cult icons of its downtown scene. Simons likes to fixate on the past to move into the future, an artist who appears determined to pay his dues and lay bare his influences. It’s not just the word ‘drugs’ printed on a hoodie, even if it also is exactly that.

In this particular case, I think it’s important to divorce the runway from retail, the performance from product. The show is the place where a designer has the opportunity to truly express themselves in the purest form. It’s not up to the designer to second guess how a message could be misconstrued on Instagram by a rapper and consequently self-censor on account of that. If someone buys Raf Simons and shows no interest in engaging with what it means then that’s unfortunate, but it’s also not his responsibility.

The very fact that this is being written demonstrates a level of achievement in his aim – for people to talk. While the show may have felt crass to some, the fact is that drugs are everywhere, in big, bold, capital letters. It’s OK to say that.

– Thomas Gorton is editor of Dazed Digital. Follow him @angstromhoot