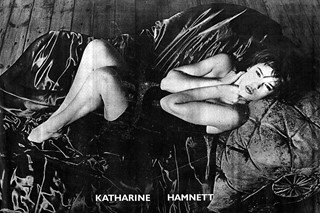 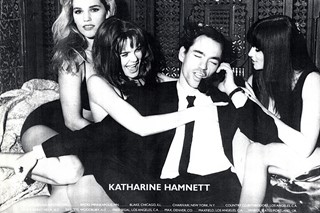 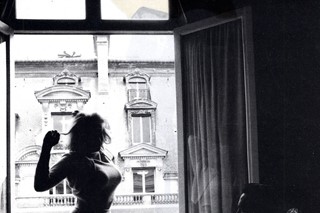 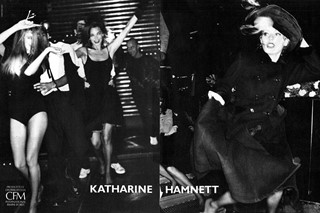 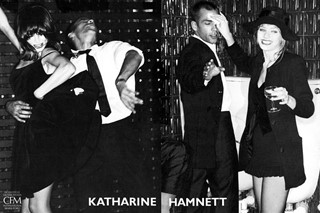 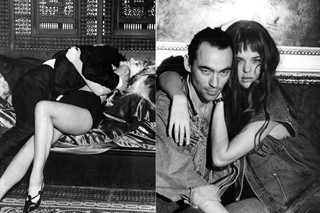 Though its been 15 years since Katharine Hamnett took a break from the fashion industry, her influence has done little to wane, and her statements ring louder than ever in 2018. The pioneer of the politically-charged t-shirt, in the world of fashion activism, Hamnett was the first to splash huge, impactive slogans across white t-shirts in her now-signature typeface. “The same typeface as The Sun newspaper’s headlines, that would be unmissable from 200 yards away,” she tells us, still as pissed off with politics as she was when she confronted Margaret Thatcher in Number 10 wearing a t-shirt that read ‘58% DON’T WANT PERSHING’ – a statement relating to UK opposition to US missiles being stationed in the UK.

Hamnett popularised the now ubiquitous slogan tee, born from a vigorous frustration with the state of the nation. She was desperate to use her voice, and her platform, to scream something without even speaking and everyone – from George Michael in his ‘CHOOSE LIFE’ iteration, to Mick Jagger in the “Dancing in the Street” video – has proudly donned the slogans that came from Hamnett’s unmissable, direct mix of fashion and politics.

But 15 years ago she threw the towel in on her own brand, so frustrated with making clothes that were about saving the world, while damaging the environment so hugely. “I tore up all my contracts at one point because I got so frustrated. And threw away beautiful distribution to 700 stores in 40 countries. I should have phased in the sustainable practices. Instead I had a 15 year pause – I still worked elsewhere – but I felt like such a hypocrite using cotton that was genuinely killing people.”

Last September, she returned to designing under her own label, and still has as much fire as she did during her first incarnation. As she releases her SS18 collection, and campaign – shot by Jonathan Baron – we sat down with fashion’s first radical activist to discuss her super-sexual campaign archive, her politically-led practices, whether any of it has really changed the world for the better, and what advice she has for young people designing now.

When you first started in fashion was the industry as politically charged as you were? How did it all feel?

Katharine Hamnett: No. It was a really horrible time – Thatcher’s Britain. She sold off council houses, she took away school milk, she smashed the unions, there was the miners’ strike and then she declared war on the fucking Falklands – murdering countless people – and then welcomed a proliferation on Cruise and Pershing missiles being deployed across Europe, without any consultation from the people who would get it in the neck if button A was pressed. So it was really frustrating then. The final thing for me, that pushed me to use my voice: I was in Italy working on a denim collection, and it was foggy, and we stopped just in time at a red light, and this thing started going past the red light, this long tube that went on and on and on. And it was a fucking Pershing missile that was going down to Sicily. I thought that’s fucking it! So I made these t-shirts – not that it’s had any effect – but we were voiceless, and I thought if I can wear something that can be read from 200 yards then maybe I can create some change.

Do you feel like everything you’ve done – all your political output, your statements, your t-shirts – have had no effect then?

Katharine Hamnett: I don’t know. The whole environment and peace movement has been going for such a long time and hasn’t achieved that much in comparison to the number of man hours we’ve put down. Marches, petitions, t-shirts – they don’t have teeth. You’ve got to show up to your MP’s surgery, write to your politicians and say I won’t vote for you next time if you don’t listen to us.

What about raising public consciousness? Is that not a major key to political change?

Katharine Hamnett: Well that’s what I thought – t-shirts as something that would help to do that. If you wrote ‘SAVE THE SEA’ on a t-shirt, people might be interested to learn more, learn ‘what’s wrong with the sea.’ There’s one I did – ‘WORLDWIDE NUCLEAR BAN NOW’ – and we were watching Top of The Pops, which back then was like going to Church, and there was one person wearing it and it was really funny because they were constantly picking the camera angle where you couldn’t see the person. But then, the next week, everyone was wearing it!

Did those moments feel good?

Katharine Hamnett: Yeah! We did a lot of ‘U.S. GO HOME’ about the missiles, and we sent them down to Joseph and they came flying straight back, with them saying “we can’t sell those, they’ll isolate an American customer.” Pffft, so me and Lynne Franks (the PR Mogul) went down to Greenham common in a white Mercedes and distributed them. Initially people thought it was a trick, but at sunset people came to grab them and then they ringed the perimeter of the American airbase and started singing and the soldiers came out. It was incredible, just amazing. But it all felt so tiny then. There were four or five clubs that everybody went to – Blitz, Heaven, Madame Jojo’s – and it was the same in Paris. It was this lovely feeling of youth unity – and everybody was wearing it.

Looking at your campaign archive, there’s so much sex in your adverts. Why was that?

Katharine Hamnett: Somebody once said, ‘people buy jeans to get laid, people buy clothes to get laid’. So in advertising I was aware that sex plays a role, so why not celebrate it?  And happiness and aspiration – I thought, what do people want? Happiness! Aristotle said the purpose of philosophy is happiness, you know, and that’s a fundamental desire of all human beings… and that often involves sexual attraction or games or play. And there’s a lot of play in those images!

The amazing one of that girl grabbing the guy’s cock…

Katharine Hamnett: That was so funny. We did get an obscenity complaint upheld over the one we did with a drag queen with her hands down two guys’ trousers. She’s this queen in full regalia, and it was shot in Blackpool. And I loved those images. Once we were selling socks in Japan – so we had pictures of two guys in the socks and nothing else drinking tea. I wanted my images to be playful, and shocking.

Katharine Hamnett: It’s fun! I mean, we didn’t have much budget – which is why we had to black and white them in the first place, because it was cheaper for print advertising. I thought, we’ve got no money…and still everyone copied. One shoot we did with Claudia Schiffer, Ellen Von Unwerth – another brand took the models, the concept and even some of our clothes and used them for their campaign!

Who were you working with on all these incredible campaigns?

Katharine Hamnett: I gave Claudia Schiffer her first job. Ellen Von Unwerth her first job. Juergen his first fashion job. Terry Richardson his first job. Naomi Campbell her first catwalk. Nadja Auermann her first catwalk. Kate Moss her first pictures, with Juergen. I should run an agency really… But we started doing these campaigns ourselves, before we had budget. And there was this French magazine called Jill, and in the back there was this fabulous shot by Ellen of these two women in the most glamorous cocktail outfits sat on two gravestones laughing their heads off – perhaps celebrating the deaths of their husbands, or perhaps a rich grandfather – and I loved it. So I tracked her down, this was 1986 I think. We did loads of campaigns with her. Then we worked with Terry, and then Juergen. Jonathan Baron shot the most recent one, the one for SS18, and I’m always looking now for new talent.

Do you want the people you work with to have as political a stance as you? Does that make an effective campaign image?

Katharine Hamnett: Not necessarily. But I think imagery has goten samey. It’s always got to stand on its own as a photograph – like a Man Ray. I said to Ellen, they have to be stills from ‘the best movie you’ve ever seen, you just haven’t seen it yet!’ But doing these images – God, it was all just so, so fun – we’d discuss story, casting, references, old film reviews and stills from the 50s. Juergen was different because he hadn’t done fashion before, so it was amazing to do something with a photographer who was really an art photographer.

Was it a choice to keep the political statements for the t-shirts, and the campaigns more about sex and happiness?

Katharine Hamnett: We didn’t do political statements really in our advertising. Unless it’s a political statement to just want to be happy! So the t-shirts had a life of their own outside that. There are the big Peter Lindbergh shots with ‘STOP ACID RAIN’. But I wanted to use all the tricks to get the attention of the picture editors – because they were all men – so I’d do wet white silk t-shirts. But that Peter Lindbergh went out and really caught people’s attention.

You officially came back to fashion full-time last September. Do you think now was the time, when fashion is so often inextricably linked to political statement? Do you think it should be?

Katharine Hamnett: Fashion gives you a voice. You need to represent something as a designer more than just a piece of clothing, which is a shame because there’s something so wonderful about a nice piece of clothing. But as long as you’re saying the right thing you really can raise awareness. But I think if we want change then this is all good, but we really, really have to step it up at this point.

What about young people in design who want to embed political messages into their work?

Katharine Hamnett: The absolute first thing you’ve got to do is look at sustainability because that’s intensely political. We have problems with waste so look at reusability, recyclability, durability – that’s political and will get more so. Donate some profit to charity. I use t-shirts and the voice my job has given me. And making ethical choices is the right way too. Boycott. Make things that are beautiful, not harmful.