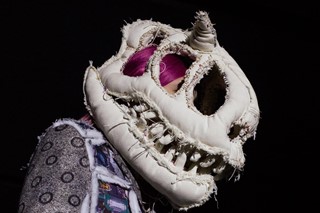 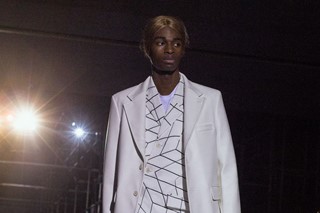 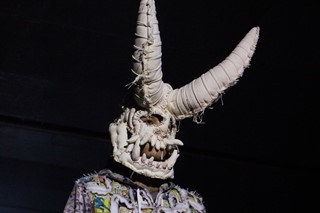 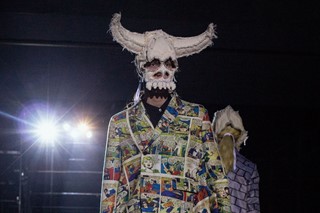 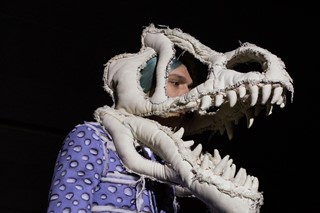 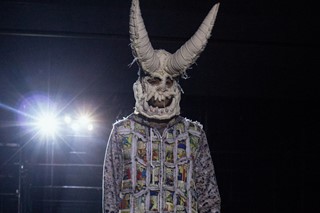 Taking place on the stage of Paris’s Théâtre du Châtelet, in a white, open-ended box that had been constructed inside the space, this season’s Comme des Garçons Homme Plus show featured deconstructed tailoring, comic book strip motifs, a new shoe collab and unique dinosaur headpieces. Here’s your rundown of what happened at the show.

Rei’s seemingly still enraptured with all things dino for AW18, after her Triceratops-adorned sneakers proved to be a runaway (and sell-out) success in 2017. This season, the designer presented a number of dinosaur skull headpieces that the models wore down the catwalk. As part of a collaboration with artist Shimoda Masakatsu, the Tyrannosaurus Rex and Triceratops heads were crafted from stuffed white cotton that was pulled across wire structures like artisanal prehistoric artefacts.

THE COLLECTION WAS IN THREE PARTS

Act one saw the models take to the runway in a series of tailored suits that featured comic book, camo, crazy paving and other printed patchworks, often as the top layer of a plush, cushion like panel crafted from lining materials. Act two was a procession of all-white or cream looks, with shorts or slightly cropped trousers and skewed overcoats all key. Act three saw the previous two parts come together, as Rei combined the two opposing elements – and finished everything off with the dinosaur headpieces.

REI IS A WOMAN OF FEW WORDS

The only hint at what the inspiration behind the collection could be came in the form of four words: WHITE SHOCK Inner Rebel.

THERE WERE A FEW UNUSUAL WALKS

It was a more straightforward runway than last season’s dancing models extravaganza, but that didn’t make the clothes any less impactful. Models occasionally paused mid-runway to turn and stare down the crowd or walk backwards for a few steps, disrupting the expected pace of the catwalk.

CDG TEAMED UP WITH MELISSA AGAIN

For SS18, the Brazilian brand known for their rubber creations contributed shoes to the Comme womenswear show. The collaboration continued for this menswear collection, with models wearing black and white PVC trainers which looked like they’d been 3D printed.