Taking inspiration from sailors and Victorian dolls to nature and East Asian architecture, this is the class of 2018 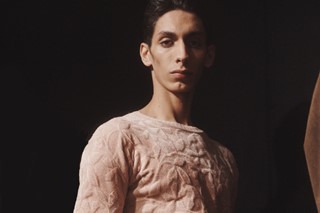 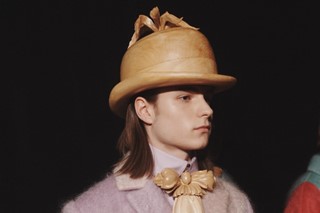 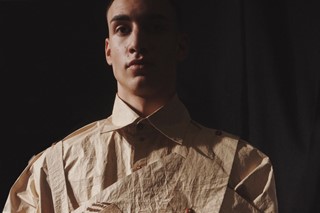 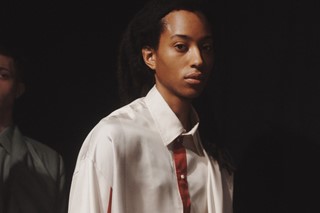 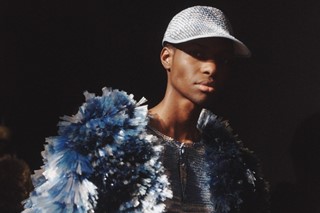 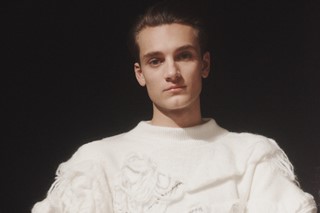 At this year’s London College of Fashion MA Graduate show, things took a more pared back turn. With a line-up ten designers-strong, many of the up-and-comers focused their attention on floatier tailoring and fascinating garment and textile construction, rather than overt political messages or statements.

The show opened with Yixin Zhang’s colourful, fluffy take on tailored coats. Oversized at the shoulder, and pleated down the back at differing lengths – some above the hip, some just above the knee – Zhang’s Charlie and the Chocolate Factory-esque palette, along with the spectacular carved wooden hats and bow ties, balanced the attitude of childhood with the maturity of a skilled cut. Fellow student Han Xu opted for a similar use of colour – but this time on fitted neoprene jackets in lilac, mustard and lime green.

Ying Yi Lu offered her take on childlike dressing too, only this time with a hint of nautical realness; the collection included corsets, flared trousers and ruffled shirts in navies and beiges, with big pussy bows and jauntily tilted sailor hats to boot. “I think sailors are so sexy, but I wanted to mix this with the childishness and cuteness of Victorian Dolls,” Lu told us backstage after the show.

Hanni Yang opted for the floatiest tailoring of the lot, with coats, jackets and shirts in peach-skin black, sage green, and custard-hued creams. Panels of fabric grew from the lapel, the shoulder or the torso, swooping into scarves which hung at the waist or the thigh, with priest-like tassels at the seam. Ming Lai Lee went in a similar direction, but with felting and knitting and cloud-shaped sweaters; wool was rolled and frayed to make giant jumpers with a hole here and silhouette-distorting mound there.

Coline Gauthier’s tweed-print puffer gilets, cocktail pink flocked floral sweaters and houndstooth tank tops had a family tie, with everything she made referencing things found in her grandparents’ house back in France. “It’s a mix and match of souvenirs and things they’ve collected,” Gauthier explained after the show. “It was about creating comfort and warmth, and the textures I used – from the yarns to the way things were knitted – were all about me creating a comfortable nest.”

Elsewhere, Wenya Huang made massive three-piece suits out of papery camel coloured fabric, with each garment with sweet appliqués of faces and hands creeping across them. With a racing green, tight crop-top present throughout Huang’s offering, the collection was full of natural elements. Hengmin Lu also focussed on nature. “I was looking for inspiration in oriental tradition – looking at East Asian architecture, which I applied in my pattern cutting. I wanted the colours to be natural. My clothes are quiet, but with strength – like standing in nature,” he explained. Edges of precisely tailored jackets were delicately frayed, and a life-vest style top acted as protective outerwear, with colours which were, according to Lu, “about natural selection – navy, white, green.”

“I think sailors are so sexy, but I wanted to mix this with the childishness and cuteness of Victorian Dolls” – Ying Yi Lu

Sohyeon Park updated the awkward dad suit – ugly tie included – with jackets which fastened oddly and featured big shoulders that appeared to be falling off the models’ tiny frames. Graphic patterns were small and detailed in deep greens and shiny ochre, and high-waisted jeans flared out from the knee. The show closed with a glimmering offer from XUBO – whose tight-fitting trousers and tops were woven in multiple pastel colours and metallics out of glistening raffia. Over the top were fluffy jackets that matched perfectly in a hue of colours from silver and lilac, to bronze and peach.

Finally, though not a designer, a notable mention must go to the (incredibly enthused) DJ who soundtracked the show whilst singing, trumpeting and dancing to the sound of his own Balearic beats at 10am.