Following its NYFW debut last night, we speak to the designer-in-residence about reviving the iconic label

“I guess I was thinking about which designer, especially in New York, really carried that energy and spirit.” Isabella Burley, Editor-in-Residence at Helmut Lang, and Dazed’s Editor-in-Chief, is talking about how she was tasked with reimagining the house built by Helmut Lang, one of the most beloved and respected names in fashion.

It’s his energy and spirit that still permeates many other designers’ work, season after season – his pioneering minimalism, his interest in the fetishistic, his subversive adverts, even the fact that his models walked really fast. So finding someone who’d look at this legacy and embrace it rather than be scared was quite the task. Quite simply, she knew it had to be Shayne Oliver, the force behind of Hood By Air, who over the past decade has revitalised fashion in New York, and moved the heartbeat of the industry towards sportswear and the street. More importantly, as she explained, “What Shayne does isn’t just about clothing, it’s reverberated so far beyond that. It’s about infiltrating culture, in the same way that I think Helmut was so incredibly pioneering and disruptive. I was really looking at who of the younger design generation would fit that. And Shayne had to be number one.” 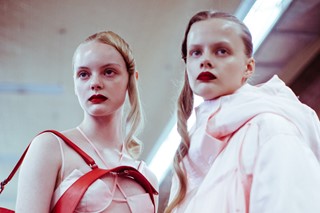 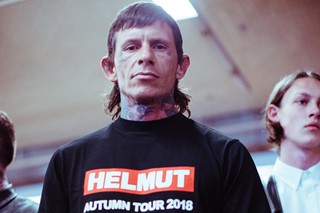 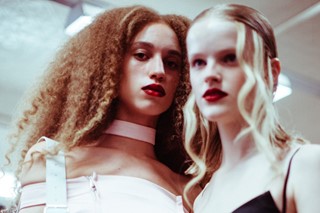 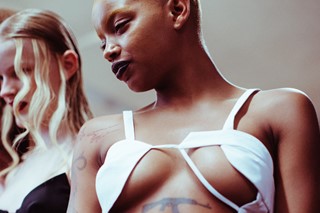 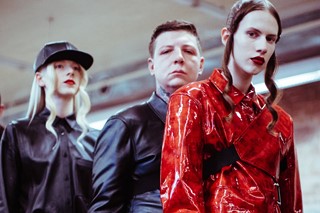 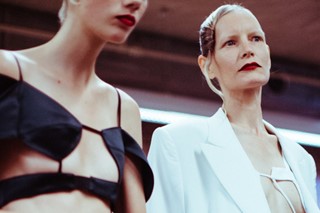 From the moment that Selena Forrest made her first tentative step onto the runway at last night’s show, it was clear that the Lang-ian spirit was very much back. The clothes fell away from the body to reveal expertly engineered undergarments, from outsize leather bras to silken garters, held together with belts, straps and chains. The sexuality was both brazen and refined, the more overtly sexual pieces paired with elegant tailoring. Oh, and great boots that are just made to be walked over someone, and enormous bags, sometimes shaped like bras too. The crowd whooped over the finale music – Whitney Houston’s tear jerking ballad from The Bodyguard, “I Have Nothing”. A success.

“I was thinking about something more sensual,” said Oliver backstage after the show, mobbed by both wild looking friends and admirers, and the less wild looking fashion press with their notebooks. “I was looking for sensuality, and to feel comfortable in it.” He found this in Lang’s world. “What I liked most about all the things he made was that they were staples, they were things you needed. And everything else was being built out of some sort of fetishistic idea, and that’s something I really vibe with.”

“I think Helmut was so incredibly pioneering and disruptive. I was really looking at who of the younger design generation would fit that. And Shayne had to be number one” – Isabella Burley

This vision was integral to how Oliver built the collection, starting with the undergarments and moving forward from there. “Instead of the t-shirts as a branding thing, I was thinking about them as an undergarment. Then we built shapes from there. Everything else is just basics… basically,” he laughed. As for his role ‘in residence’? “I think it just means that I was able to dig into the estate as a curator. And do things how I wanted, see things how I wanted to.”

And what, if anything, has Oliver learned from living so closely with Helmut Lang? “Consistency,” he admitted. “And relevancy to people’s lives. It was very truthful.” For Burley, doing the show and working together was “Crazy, but I loved every minute of it, it was amazing seeing this come together.”  And the soundtrack? Why Whitney? Oliver laughed. “It came from wanting to feel sexy, wanting to feel protected. You know, Whitney Houston in The Bodyguard was a really powerful woman, but she needed protection.”