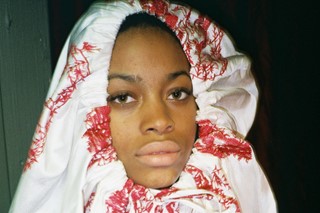 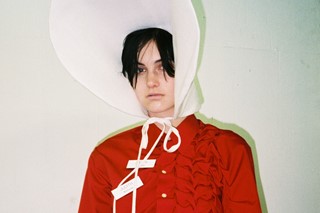 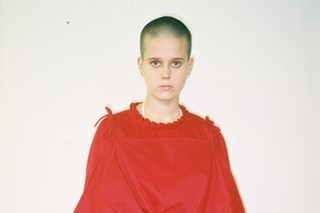 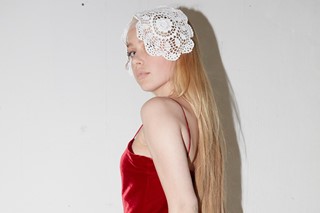 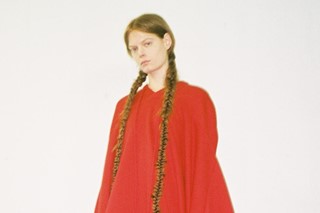 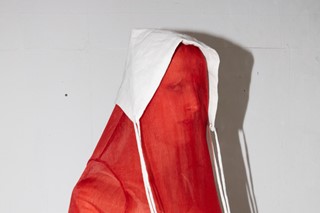 Last night on the Lower East Side of Manhattan, the Vaquera collective – designers Patric DiCaprio, Bryn Taubensee, David Moses, and Claire Sully – presented a collection in conjunction with Hulu’s adaptation of The Handmaid’s Tale. It was held at the Angel Orensanz Foundation, located inside a gothic revival synagogue. The handmaid-inspired clothes, styled by Dazed’s senior fashion editor, Emma Wyman, were presented in a performance rather than a typical runway show. It was all pretty trippy.

At first glance, it seems odd for a young, independent clothing brand to work with a streaming behemoth like Hulu. But when you think about it, a Vaquera x The Handmaid’s Tale collaboration actually makes a lot of sense. In addition to sharing an aesthetic sensibility (Vaquera plays with 18th century silhouettes, and they really love a bonnet), both label and show thoughtfully ruminate on modern political issues in unorthodox ways. Vaquera does so through witty collections, which both celebrate and critique American tropes, and Handmaid’s by creating a dystopia in which the War on Women has completely exploded. “I feel like when we’re making clothes, we’re putting clothes out into a market that’s already oversaturated, so it’s really important to us that we always have a very strong message behind it,” said Moses. “This felt very natural.”

“We always like to discuss issues specifically in America,” said Taubensee. “And this is not just an American issue, but oppression, and trying to stop people from being individuals – we relate to it in a lot of ways, I couldn’t even name them all.”

The collection clearly references the Handmaids’ iconic blood-red cloaks and white bonnets, with a number of variations on the theme. The funniest one came in the form of a waitress uniform. “We were talking about a Ruby Tuesday’s waiter, or someone who’s forced to wear a uniform,” said DiCaprio. “I feel like that’s modesty, in a way.” I suppose sex slaves and chain restaurant workers have some things in common. Under his eye!

But jokes aside, each look featured attentive symbolism, picking up on various small details from both the Margaret Atwood novel and Hulu series. One model wore a headdress evocative of the conservative wife Serena Joy’s doilies; another wore one made of books, most of which are forbidden in Handmaids’ dystopian theocracy, the Republic of Gilead; and Handmaid’s Tale costume designer Ann Crabtree modeled a look that included a red ear tag, which handmaids sport on the show as a sick form of cattle-like identification.

“We started this collection thinking that we would do some looks ‘oppressed,’ and some looks ‘empowered,’ but then we sort of realised while we were doing it that way, all of them could be both” – Claire Sully

As is the norm for Vaquera, each look featured some form of contrast, most notably in pantsuits made from the oppressive red Handmaids’ fabric, and full-length dresses with long sleeves rendered in completely sheer fabric. One particular highlight was a nearly nude model holding a white umbrella with a sheer curtain fully draped around her, which reminded me of a design from the late Ben Cho; it was all very Madonna/Whore complex, which is exactly what the Republic of Gilead runs on (it’s a society built around the sexual slavery of women who aren’t allowed to express their own sexuality in any way. Sound familiar?). “Modesty versus exhibitionism was one of the first things we were thinking about,” said Taubensee. “It’s like the umbrella, where she’s technically really exposed. It could be empowering, or you could feel really self-conscious.”

“We started this collection thinking about oppression versus empowerment, and we were thinking that we would do some looks ‘oppressed,’ and some looks ‘empowered,’” said Sully.

“But then we sort of realized while we were doing it that way, all of them could be both.”

The performances, choreographed by Remy Maelen, added to that sense of empowerment. Instead of a traditional runway show, models stomped around a raised white platform and then did a short performance in the centre, which also clearly referenced the novel and show. In a nod to Handmaid’s “gender traitors,” (aka gay people), there was a same-sex kiss; one model in an “Eve” T-shirt sucked on oranges, a rare treat in Gilead, beloved by certain handmaid-enslavers; a model in one of the most traditionally wearable garments, a teen movie-esque velvet slip dress, was presented with her hands bound. A dancer in a sheer red handmaid dress worked it with a cone bra.

Of all the designers, DiCaprio in particular is a longtime fan of The Handmaid’s Tale. I asked him if any moments from the novel or the show especially stood out to him. “I think the ending (of the book) is really exciting, where it’s left ambiguous,” he said. “It leaves you with so many questions. We’re always questioning, and we like to not give a final answer. It’s exciting for people to find their own opinions about things.”