Self-proclaimed storytellers with style, the Sartists are challenging preconceived ideas with their unique visual viewpoint 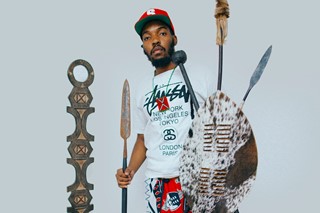 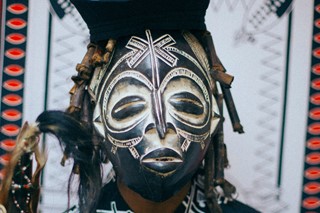 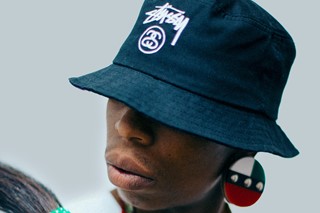 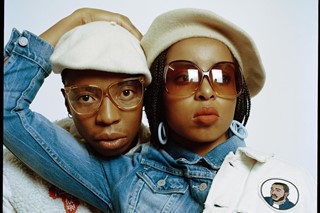 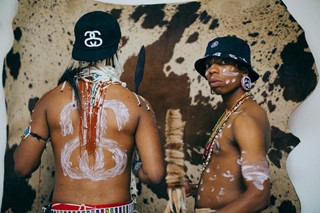 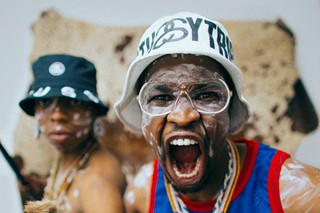 They say Johannesburg is the Berlin of Africa. They’re two cities hemispheres apart, sharing strikingly familiar and regrettable recent histories. Still, despite their repressive pasts, both have undergone unprecedented cultural renaissances, creating unique environments for expression and becoming magnets for some of the most exciting, disruptive and progressive creative thinkers.

In Johannesburg, The Sartists are just that for Africa, using style to tell contemporary stories of African youth and reframe the narratives that might dominate ideas of the city. Impressively young, they are part of a global community working outside of the often restrictive fashion industry, creating their own platforms and followers with the help of social media. Born and raised in Johannesburg, the collective is part of a new community of creatives along with Kristin Lee Moolman, Bubblegum Club, Angel-h0, and Lebogang Rasenthaba (to name but a few) redefining what it means to come of age in a post-apartheid, post-internet South Africa.

Originally founded by Kabelo Kungwane and Wanda Lephoto, the pair were soon joined by Xzavier Zulu and Andile Buka to complete the four-strong powerhouse who shoot images, direct campaigns, style, design, customise and produce clothing, as well as work on official and unofficial bespoke collaborations with brands including Levi’s and adidas. Their unofficial Stüssy shoot is one of the best non-commissioned pieces you’ll see.

We get to know the crew who are quite possibly the best dressed, most accomplished thrifters and most talented creatives in Joburg.

How did you all meet?

Xzavier Zulu: Wanda and I had been following each other on Tumblr for some time, in the era when Tumblr was popping. Realising we shared similar interests in art, music, culture etc, we DM’d each other to meet up. I then met the rest of the guys and we’ve pretty much have been friends since. They really opened my eyes to thrifting and the better spots to do it. I was a suburbs kid that was still new to Johannesburg and they gave me the crash course – the lay of the land.

When did you start producing work together as a collective?

Wanda & Kabelo: We did our first photo shoot in 2012, at the time we didn’t know what we were doing, only that we wanted to create an archive of South African styles and looks that could be used as a cultural reference in the future. That got some attention but beyond that we gained some knowledge, that our place in culture and our voices were more important than our faces. We eventually went on to become stylists and models because of the appreciation people had for our respective styles – that’s when it hit us that we could become something we never imagined for ourselves. Eventually, after meeting Andile and Xzavier, over conversations the collective gained more structure and became somewhat of a consulting business where we went on to work with brands and agencies.

What do you each bring to the collaboration?

Xzavier Zulu: One of the key things I learned in college is how to put together one fire cohesive presentation, and that has influenced my work in helping us communicate our ideas to the wider public. That coupled with my vision and the odd premonition/dream of creative executions and talking in my sleep allows me to take all of that and discuss it with my brothers – who all know something I don’t, and we come together to get to a greater idea, narrative and execution.

Wanda & Kabelo: After co-founding the collective in 2012 together we set out to simply tell stories through style. Over the course of time and through our respective educational backgrounds in fashion design and journalism we went on to become collectors of memories and stories and try to convey them so people understand our vision. That accompanied by the need of making those very same stories have meaning beyond just simple aesthetic pleasures.

What is special about Johannesburg and how does it inform your work?

Xzavier Zulu: There’s definitely more of a ‘realness’ of South Africa within Johannesburg. Whether it’s the people themselves, the languages spoken, nuances amongst tribes or classes of people. The environments, communities, suburbs themselves reveal the fabric of Johannesburg as a whole. The stories told by these people, coupled with all that inspires us from abroad breathes into everything that we do and our ideologies as individuals as well as a collective.

What in particular of your ideologies gives your works such a unique language?

Wanda Lephoto: We all grew up with different backgrounds but the need to reflect our times and to highlight often neglected stories of our country and even our continent is something that gives our creative edge. The need not to forget where we’re from but rather celebrate it. We’re born in an era where those that have paved the way are often neglected and under-celebrated and that is our main source of inspiration that informs who we are and what we’d like to do.

“(We were) inspired by black excellence and how often brands, agencies and the world in general often neglect and choose to undervalue the contribution of black people, black artists and black culture” – Wanda Lephoto

What were your first projects?

Wanda & Kabelo: Our first project, which to this day is our biggest in commercial terms – having exhibited it in the UK, Nigeria and soon in Amsterdam – is the Sartists Sports Series. The project was hugely informed by South Africa’s socio-political history, looking at colonialism and apartheid systems whose basis was to strip people of colour off of their identity and dehumanise their existence. It was informed by historic understanding that as a black man or woman you had little to no chance of making it in that system because there were no places for people that looked like us, so the only way you could make it or breakthrough was either through sports or the arts and not through systematic educational platforms.

Xzavier Zulu: Another early project was the Stüssy shoot. Wanda and I had one of our sleepover sessions at my place, where I had a dream about what became the Stüssy editorial. It was weird. That’s why I call them premonitions. Literally woke up, and told Wanda my dream. Crafted it. And a week later put it together.

Wanda, you have now launched a clothing brand. How is it shaping up?

Wanda Lephoto: ‘Wanda Lephoto’ is ready-to-wear brand inspired by the exploration of modern subcultures with traditional symbolism and experiences. My first collection which I showcased for the first time in London during London Fashion Week at a showroom in collaboration Tank magazine was a collection born from wanting, a work-in-progress collection, ever-changing, evolving and exploring the concept of ‘collaborative otherness’ through cultural fusion.

My collections are inspired by under-celebrated black culture, the need for us to belong and to represent ourselves in spaces that pre-historically exploited us and kept us out. The collections aim to challenge the preconceptions that ‘African Fashion’ is founded on the roots of traditional prints and colours, I want to change that, showing that African Fashion and style can be founded on the stories of the rich history that has happened on this continent, that more times than not it is educated by the psychological battles, physical scars, emotional trauma, spiritual misunderstanding, cultural re-appropriation and financial discomforts and those are the things that inform who we are and at the core of it, my collections. The current collection is here to tell a story.

I loved the work you did with Heron Preston, Art Comes First and Brooklyn Circus – how did these collabs come around?

Xzavier Zulu: Shoutout to Heron! Gang! Gang! Skkkkrrr! I love that nigga, man. Heron came to South Africa in June 2015, for a store collaboration and during that time we were asked to show him around. Truthfully, we didn’t know all that he was besides what we remembered from a Hypebeast feature but we ended up spending two days with him and took him to all our thrift spots, had him try some of our local food and then we simply shot a lookbook of the capsule collection he presented here on our iPhones. We shot it in Kabelo’s neighbourhood, Alexandra Township.

Wanda Lephoto: ACF, Ouigi Theodore from Brooklyn Circus and Joshua Kissi and Travis Gumbs from Street Etiquette and Joekenneth Museau. They’re all the first peoples that supported us in the beginning when even back at home people didn’t understand what we were trying to do. Having been introduced to the 100-year plan by Ouigi Theodore we became a part of a global village of like-minded people whose aim on this planet is to create sustainable change for our communities and our people through the things we cherish the most in our respective paths. We all met the above spoken on, on social media, Tumblr and Instagram and through comments and interactions we became close family, admiring the work and the storytelling creative genius each person displayed.

What was the inspiration behind your current collaboration with Levi’s?

Wanda Lephoto: Throughout the years, we’ve shared our own individual love of the Levi’s brand whether it was Xzavier customising denim on his bedroom floor years ago, or Kabelo or I thrifting our now 250+ collection in the streets of Johannesburg. When we were approached to collaborate with Levi’s it was a dream come true to share our stories through a brand that has a growing voice in our communities and one that we love its own heritage and role within fashion throughout the decades.

Identity, representation and storytelling is incredibly important to who we are as a collective. We’ve always seen and acknowledged the exploitation of our history, cultures and traditions and this inspires our constant ideologies and thoughts that we want to represent our people and take our culture forward by addressing the very same things that rid us of our individuality.

The lookbook was inspired by black excellence and how often brands, agencies and the world in general often neglect and choose to undervalue the contribution of black people, black artists and black culture to the ever-shifting global conversation on culture. It was hugely inspired by the famous Spike Lee movie School Daze as well as famous 90s love sitcom couples such as Martin and Gina from Martin, Urkel and Laura from Family Matters and Jamie and Fancy in The Jamie Foxx Show.

What’s next for you guys?

We’ve got a really great collaboration with MoMA coming up in September for its Is Fashion Modern? exhibition. Their team is really dope, genuine and generally just sweet. We are really excited about that one. The Brighton Museum Fashion Cities Africa exhibition which commenced in January this year now travels to Amsterdam in the shape of Tropenmuseum Africa Now exhibition for the month of October. So we’re hoping to be there then as we’ve looked to add more to our body of work for the exhibition itself.