Faded glamour, heavy pleather and b-movie femmes: as London Fashion Week kicks off, we shine a light on the city's far-out fashion grads in the first of a two-part series

From Central Saint Martins to London College of Fashion and the Royal College of Art, graduate designers are the lifeblood of London Fashion Week. Boundary-pushing, nonconformist and totally unafraid to question the industry they are entering into, these are the individuals that keep the city’s fashion so exciting.

As London Fashion Week begins, we spotlight the new generation in a two-part series – shot with the family and friends who inspire them the most.

Debra Shaw in conversation with Mowalola OgunlesiAfter 20 years in fashion, the McQueen muse continues to set the agenda for the meaning of cult – she talks all-access diversity with breakout London-designer, Mowalola Ogunlesi
London graduate designers — spring 20175 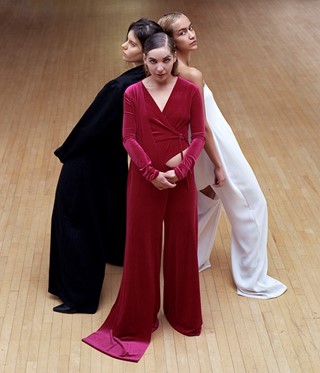 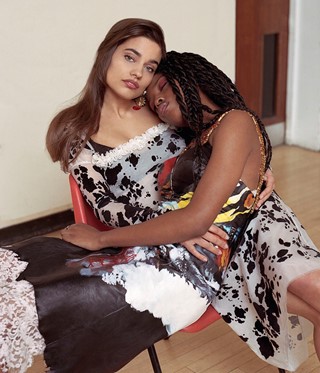 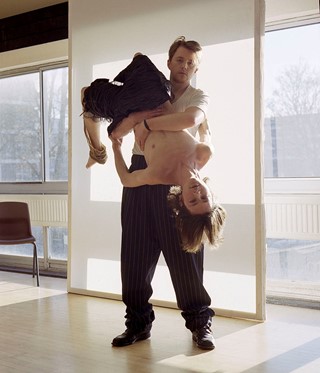 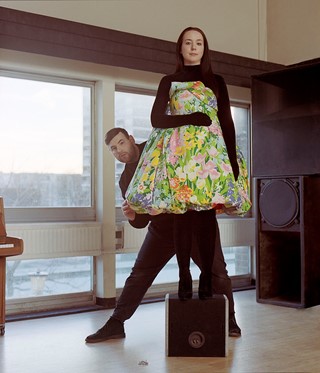 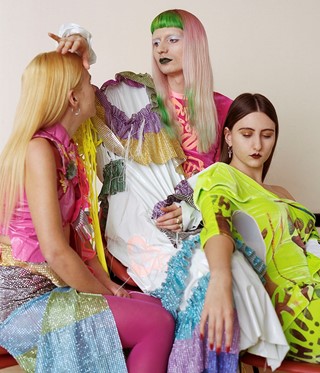 Harry Pontefract has a fetish for the ill-fitting. “The pieces were about an inappropriate and ambiguous sexuality relating to memories of mine,” he says of his graduate collection, which opened the Central Saint Martins MA show. “I collected objects and garments reflecting the sensibility of that.” The result was like a blown-up version of your overspilling underwear drawer, with designs that collaged slips, stockings, bras and cheap handbags in an unsettling milieu of nude mesh and harsh, pleather-like materials. Even rendering the odd shapes that occur when a strapless, padded bra is two sizes too big as a thing of beauty, Pontefract is more sculptor than tailor. But while the Sheffield-born designer’s subversive creations stood out from the class, he could never have done it alone. “The stocking garments ended up being a mixture of 1970s deadstock from a man called Peter on the outskirts of Rochdale,” he says of his unlikely collaborator, who he met online. “They’re a very particular fabric that was extremely rare that I needed, as they were the only kind which would shape to the wearer over time. And the rest... Primark.” Despite the hype around his graduate collection (Pontefract has reportedly already turned down notable fashion plates such as Kim Kardashian and Rihanna), he won’t be showing seasonal collections this year, instead working on projects like his January installation at the Comme des Garçons Trading Museum in Paris. Determined to take things at his own speed, Pontefract’s willingness to take risks is something he ascribes to the industry’s openness to change. “If anyone wants to do it differently they’re free to do it and will most likely be applauded for it,” he enthuses. “There isn’t a rulebook to stick to, which I think a lot of people feel… I like having something to kick against.”

You might find the Mimi Wade muse nestled somewhere in the Hollywood Hills, sipping a French 75 in a lace-trim slip and marabou pom-pom slippers – but not before she leaves some passive aggressive Post-it notes lying around the house. That’s how designer Mimi Wade paints a picture of her grandmother, former B-movie star Pamela Curran, who provides the 25-year-old with her number-one inspiration. “She will affix them to a cupboard with these bunny-rabbit stickers, it’s quite comical,” says the CSM BA graduate. “That feminine cutesiness mixed with that aggression... I wanted that sort of spirit in the clothes.” Having “never been attracted to minimal things”, Wade’s meeting her grandmother for the first time last summer sparked the designer’s obsession with the bold femininity and underlying humour of Hollywood’s golden age. The result, as displayed in her Fashion East-sponsored SS17 offering, is dress-focused designs that combine super-kawaii puffs and frills with the bold painted graphics of movie posters – and not without an undercurrent of eroticism (these are dresses “suggested for mature audiences”, as one bodice spelled out). It’s this dedication to decadence which has already seen Wade’s dresses, in turn, worn by some of the world’s most fabulous females – including her ultimate woman crush, Pamela Anderson, who donned one of the designer’s lace slip dresses in the last-ever nude Playboy in December last year. “I like the fact that Pamela Anderson is not a slave to (her public persona), she doesn’t feel like she has to present this perfect image of herself every day.” That said, “If you have a choice to look fab or look drab... there’s no contest.”

"Beauty is terror,” said someone Greek, once. It’s a sentiment that Matty Bovan, whose own rainbow-daubed visage provides the smiling face to his teeming, garishly coloured world of design, presumably wouldn’t agree with. But, as the young designer pushes an already subversive take on glamour to new places, his Cindy Sherman-esque mode of self-reflection does begin to verge on the sinister. “Whilst on the Central Saint Martins MA, some of the most breakthrough advice I was given was to document myself and what I was wearing, and (figure out) how to deconstruct that code,” he explains. “That really unlocked a door in my design head.” Now that door has opened on to a whole world of object experiments – at the end of 2016, Bovan even debuted a zine, Yorkshire Rosé, as shot by his friend and collaborator, Lucy Alex Mac. The publication continued the themes of his outlandish SS17 collection in a series of portraits – what Bovan described at the time as “amplified aspects” of his personality” – ranging from “a twisted porn star”, someone “medieval” and a figure “in a motorcycle suit and all-orange make-up, which is definitely the most sinister”. Based out of his hometown of York, Bovan is a leading force in a generation of designers who have responded to London’s rising expense by doing things their own way, at a distance. But, as he asserts, he isn’t done with changing the system from within. “(I want to change) the way fashion is bought and sold. I’m really interested in working on unique and bespoke pieces in the future. That’s the way I create a lot of my showpieces: with draping and unique textiles that cannot be recreated.” Shredded, knitted, glittering and seemingly alive, these are designs that will continue to refuse pretenders for AW17 and beyond.

Masked and dangerous, the Richard Quinn woman is “powerful, not to be messed with.” That’s how the South East London-hailing designer describes his fatal femmes, who stepped out for his Central Saint Martins MA show wearing gimp-like masks overlaid with New Look-era coats and dresses, splashed all over with the kind of bold florals and outsized houndstooth patterns one might associate with an elegantly bored 1950s housewife. In fact, says Quinn, these fabricated women were inspired by underrated artist Paul Harris, whose enigmatic work upholstered figures to chairs. “I became quite obsessed, and still am to be honest, with 1960s upholstery fabrics,” he describes. “The idea of taking shapes we feel comfortable with and beginning to subvert them, bringing them into a new context (and) a world of their own. I find it really unsettling putting familiar elements into a darker, more characterized scenario.” Hailed as one of the class of 2016’s most boundary-pushing debuts, Quinn recognises the importance of creating a sense of event when you’re an emerging designer. “There are a lot of shows that could be lookbooks right now”, he says. “I want to bring back the idea of a show being a real show people look forward to seeing.” That said, he wants to channel all that grammable hype to create solid, real-world changes – and his eyes are on more than just his own label. Right now, Quinn is in the process of creating a new studio in Peckham which will have an open access screen print studio as well as his own space. “We are aiming to offer an affordable, reliable service and space for young creatives – so watch this space!” he exclaims. Aside from that, he has the tough job of following up such a trailblazing MA collection – with a little help from H&M, who announced Quinn as the winner of its 2017 Design Award which will see his designs sold in selected stores. His advice for those designers who might want to go it alone post-university? Simply, “Go for it. If it’s what you want, (and) it feels right, then why not?”

It’s not a choice, I think. It’s just something you have in you,” says Marta Jakubowski of the strength it takes to set up your own label in the current fashion landscape. The Polish-born, German-raised designer has gone by instinct ever since her emotionally charged MA graduate collection, where models walked in file connected by lengths of red, white and black fabric: a striking metaphor of connection and untethering that spoke to the designer’s loss of her mother just the year before. Since then, she has elaborated on that introspective vision with thoughtful designs that marry almost brutally bold colourways with a deceptively naive approach to shape and structure. The result feels uniquely freeing, and feminine – but Jakubowski disagrees that her sisterhood is for girls only. “I always try to have some boys in the show, ’cos then it keeps it about clothes. I don’t want to exclude anyone: no creed, no sex.” That said, for SS17, her minimalism made way for a certain theatricality, with models hanging off a bubblegum-pink carousel – perhaps a nod to her days as a costume intern, and, somewhat uneasily, a setting of childhood for what was her most sensual collection to date. Then again, the Jakubowski woman relishes ambiguity. “The (woman) is always the same, kind of, because it’s always kind of me. Obviously, I become older, and the woman becomes older, or matures, or changes. But she’s never totally different.” One constant has been her friend Soraya (pictured here with show stylist Tati Cotliar) who has appeared in every lookbook. “She’d be a very old woman but she’d still be there... I’d love that!” she laughs. “(I want) people who are there, every time and every season and there’s not even a question. Keep it in the family a little bit.”