Seating Madonna and a Trump in the same front row, the designer’s #MakeNYFWGreatAgain show eschewed the industry’s intellectual elitism 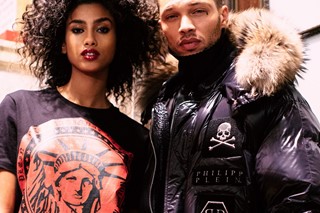 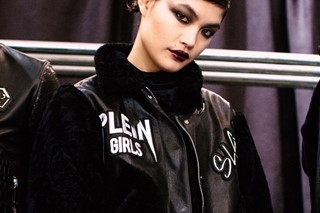 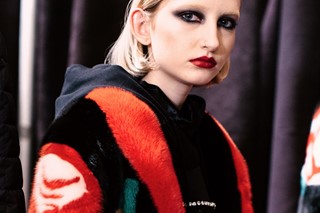 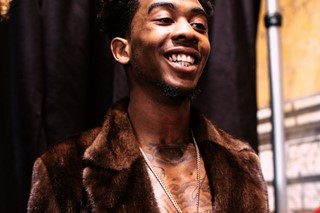 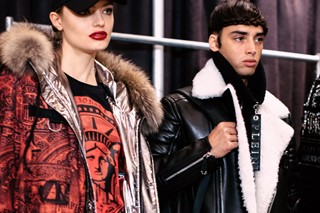 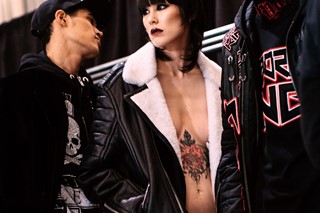 “People always ask me where’s the party,” Philipp Plein said, during an unorthodox address before his runway show, held last night at the New York Public Library. He could have been making a veiled reference to the “Where’s The Party?” singer herself, who was wedged between Steven Klein and Kylie Jenner in the front row, her immortal visage frozen beneath a pair of elephantine wraparound shades. “The party is here, where I’m standing,” Plein said, answering those people. Then Nas performed.

“Saluting NY and Philipp Plein for your very generous donation to @raisingmalawi,” Madonna Instagrammed after the show, resolving any hovering questions about how you get the Material Girl into your front row. Despite talk of large fees for every celebrity in attendance, it somehow made sense when Madonna strode the length of the runway to her seat. Not since Christian Audigier’s glittery, tattooed reign at Ed Hardy and Von Dutch in the early zeroes has a designer traded so bombastically in the art of the low brow. If Plein were making any sort of statement with his collection for AW17, it was that one man’s trash is another’s treasure – music to the ears of former Audigier acolytes like Madonna and Paris Hilton.

“Tiffany Trump was seated mere feet away from Madonna, one of her father’s most outspoken critics. Who knew a Philipp Plein show could bridge our gaping national divide?”

Paris was there too, of course. So was Nicole Richie’s little sister, Sofia. Kylie Jenner made a splash in a spangly bodysuit like Kim Kardashian 2.0. It could have been 2004 all over again if it weren’t for the very au courant hashtag of #MakeNYFWGreatAgain, which leaped out from lookbooks placed on each seat. (Hilariously, large chain-link fences and neon signs decorated the space, spouting phrases like “THE DEVIL IS JEALOUS OF ME” and “EVERYONE WANTS TO EAT BUT FEW ARE WILLING TO HUNT.”)

Given some of the pro-diversity and pro-immigration messages scrawled in sharpie-pen inside those lookbooks, one could have assumed the Trump reference was an ironic one – that is until we realised Tiffany Trump was seated mere feet away from Madonna, one of her father’s most outspoken critics. Who knew a Philipp Plein show could bridge our gaping national divide? If Plein is tapped into any universal truth, it’s that money talks, and in that sense, his collection for AW17 gave a Trumpian primal scream.

When the first look came out, a shiny hooded parka worn by “hot felon“ Jeremy Meeks, it was clear that we would be treated to another collection of what Plein has called “hip rock”...an urban opulence that could skew hip-hop or rock-and-roll, dismissing notions of genre by sheer force of volume. In 2008, the Orlando emo-goth dubstep band Blood On The Dancefloor released an album called It’s Hard To Be A Diamond In A Rhinestone World. Perhaps Philipp Plein feels that way, as he blends genres of screen-printed mall fantasia, creating his own aesthetic of adolescent rebellion that could belong anywhere from Ozzfest to Electric Daisy Carnival, from San Diego to Dubai (if not at New York Fashion Week).

Parkas, bombers and sexy cut-out gowns abounded, plastered in faux-metal fonts that said “NEIGHBORHOOD KINGS”. Black velvet, sequins, red suede, flame prints, and silver nylon dominated in the form of thigh-high boots, cutout gowns, vicious motorcycle jackets, and spangled bodysuits. Photographer Sebastian Faena stomped the runway in lipstick and a beige coat with blue jeans (his own clothing?). Pete Wentz skulked by in eyebrow piercings and an exaggerated snood. Fetty Wap and Young Thug made appearances. The rapper Desiigner forced a smile the length of the entire runway (amid so much savage model face angst, that move felt genuinely transgressive). Then two models wore reduxes of one of Raf Simons’ oversized puffers from AW16. It may have felt wrong to the fashion cognoscenti, but no one turns to Plein for originality: shamelessness is his specialty, and he’ll be the first one to shout it through a Marshall amplifier.

“There’s an implicit voyeurism to what Plein does. But the intrigue lies in the sort of outsider-ness that Plein has genuinely managed to tap into”

The collection sure didn’t disappoint Plein’s nipped and tucked fan base: many of the brand’s biggest clients formed the bulk of attendance. They looked like heavy metal socialite housewives from space, the type of attention-seeking, rich eccentrics that reality TV producers would die over if they only knew where to find them. Perhaps they can scout around one of Plein’s new stateside shops, including two new outposts hitting Hawaii and Vegas this spring. There’s an implicit voyeurism to what Plein does: his Instagram is prime entertainment, for starters. But the intrigue lies in the sort of outsider-ness that Plein has genuinely managed to tap into, quite like Trump did during the election. This is what reportedly attracted Carine Roitfeld to style his shows, although the money can’t suck either.

Regardless of what fashion thinks of Plein, Plein seems to think fashion can be accessed by anyone – at least to anyone who can afford a $3,000 python mini-backpack. The fact that it’s expensive to a certain type of striver makes it cool. If it eschews intellectual elitism, all the better. As we’ve now seen, sometimes the most resonant message is one of blind ambition, lack of depth notwithstanding. "Who the fuck is Philipp Plein?” Plein gasped to rounds of rolling applause. “They call me a dream chaser. If I don’t believe in my dreams and we don’t believe in our dreams, they will never come true. So that’s me...And, yeah.”