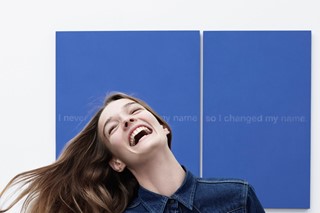 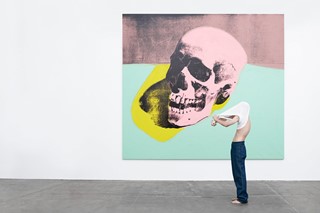 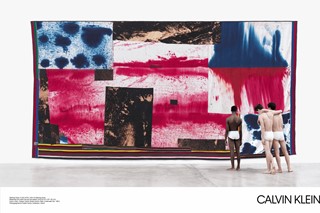 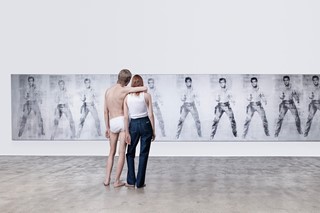 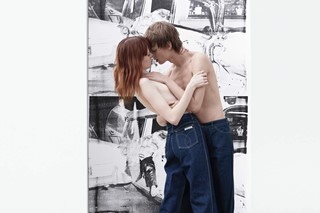 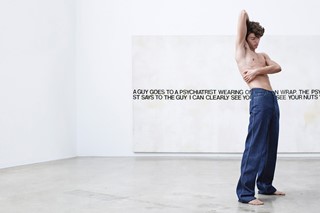 Yesterday, the first Calvin Klein campaign of Raf Simons’ tenure as the brand’s chief creative officer was unveiled. Shot and styled by his long-time collaborators Willy Vanderperre and Olivier Rizzo, respectively, the series of images act as a statement of intent for the New York brand under the Belgian designer. They are remarkable for their bucking of dominant advertising trends and their apparent lack of commerciality, indicative of a designer who has, in the past, been one of the fashion industry’s most prominent agitators.

Part-homage, part-subversion of Calvin Klein at its most recognisable, androgynous models appear clad in white underwear and American blue denim. However, unlike campaign stars of the past – who have ranged from Kate Moss and Marky Mark to, more recently, Kendall Jenner and Justin Bieber – the focus here is not the models at all but, instead, art. More precisely, the work of three Americans: Richard Prince, Andy Warhol and Sterling Ruby. (Simons has previously collaborated with the latter on his eponymous label and at Dior). In most shots, the faces of the models are obscured, or directed away from the camera towards the backdrop of art, and the garments themselves are intentionally unremarkable.

Or, rather, they are classic. “The Spring 2017 Calvin Klein campaign is a celebration of these American classics, placing the archival denim, cotton tank top and quintessential men’s briefs in playful contrast and context with great works of art from the second half of the 20th century,” reads the copy that accompanies the campaign on Calvin Klein’s website. “Here the clothes strike up a conversation with the art much the way designers and artists in New York’s Pop heyday would have in the streets of SoHo or on the dance floor of Studio 54.”

That Simons would opt for this direction in his first campaign for Calvin Klein should not come as a surprise; contemporary art is a recurring motif in his work – he has, in the past, compared it to air, such is its importance in his day-to-day well-being. What is significant, however, is the artists he chose, specifically Warhol and Prince. Through this decision, Simons is not only framing the brand’s legacy as being of similar cultural weight to that of the two New York artists, but also suggests a newly-intellectualised Calvin Klein.

In his choice of artworks by Warhol, the man who transformed everyday products into high art forms, he has highlighted some of his more sombre pieces – perhaps a nod to the idea that while his legacy extends beyond soup cans, Calvin Klein’s extends beyond underpants. Similarly, in opting for Prince – someone whose recent work has examined, and arguably taken a stab at a generation obsessed with self-image and social media, with works which are essentially giant Instagram screengrabs – Simons has subverted the formula that much of his new employer’s success has been built upon. It’s a far cry from those sultry #mycalvins selfies.

Indeed, this feels like a real departure from Calvin Klein’s penchant for infamous, sexually-charged campaigns that stretches back as far as the 80s, with ads that dripped with provocation, innuendo and celebrity (and even sparked notorious battles over ‘kiddie porn’). Calvin Klein campaigns have typically been big-budget, big-bulge affairs. In contrast, this feels deliberately anodyne – and perhaps all the more intriguing for it. In one image, a topless couple embrace (so far, so Calvin) but they are standing in front of a Warhol depicting a car crash, a lolling arm hanging out of the wreckage. It’s a mix of eros and thanatos worthy of J.G. Ballard, a subversion of the overplayed sexuality of fashion campaigns.

“Through this decision, Simons is not only framing the brand’s legacy as being of similar cultural weight to that of the two New York artists, but also suggests a newly-intellectualised Calvin Klein”

“Calvin Klein is not only about iconic underwear and ‪jeans – it’s about so much more," the Belgian designer was quoted as saying recently, as part of the launch of ‘By Appointment’. This past month of menswear shows saw a host of brands, from Louis Vuitton to Balenciaga, gripped by logo-mania and an apparent desire to create ‘hyped’ product – the kind which is consumed and shared on the internet with fervour. In its iconic underwear, Calvin Klein arguably already has this coveted asset. And yet, there is not a single branded brief or boxer waistband in the entire series of images. There isn’t a social media star, either. To eschew this route – one of proven commercial success, that is so patently on-trend – feeds into the much greater question of what Simons hopes to achieve in his role at Calvin Klein, how he plans to reconfigure its role within the wider context of fashion and culture.

In his opening months in New York it is perhaps becoming gradually more apparent. Simons has not only been tasked with leading Calvin Klein into a new era but, increasingly, it would seem he has set about using his role to present an alternative to the problems of the industry that he has been such a sharp critic of in recent years. In what could be perceived as a response to the ever-quickening pace of fashion, Simons’ first move was to open up access to Calvin Klein’s ‘By Appointment’ line, which has previously only been accessible by celebrities. This hand-crafted, made in New York line is about as far removed from the concept of fast-fashion as possible. And in making his first move to open up this once-exclusive club to anyone surely underlines a commitment to railing against the pace of the industry.

Similarly, with this week’s campaign, Simons has provided a compelling alternative to the celebrity-fuelled commercialism we have come to expect from fashion campaigns. In updating the Calvin Klein ad-formula – not to mention the brand’s logo, which he has also since replaced with some help from Peter Saville – Simons has shown that his vision for the brand is not one rooted in past glories or even industry convention for that matter. Instead, his proposal thus far has been a marriage of Calvin Klein’s pop-culture heritage with a certain intellectualism. What’s clear is that, while he may be back working in the system that he denounced when leaving Dior, he is refusing to play by the rules.