As Coach open their Regent Street store, we sit down with the Brit in charge for a quick-fire pop quiz 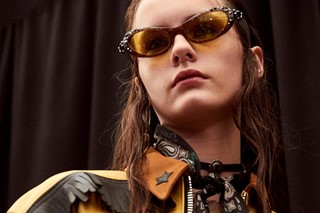 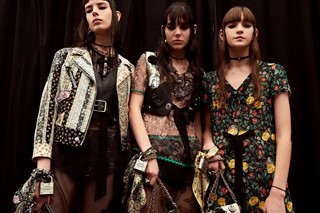 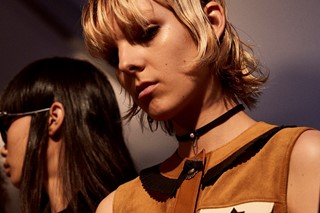 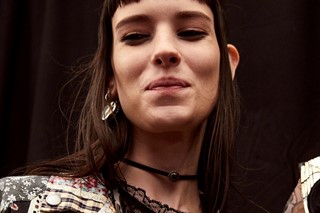 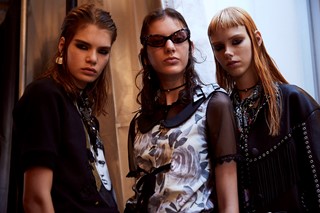 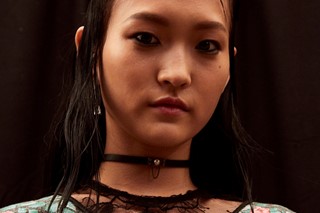 With cute-but-dark monster designs, dinosaur mascots, Elvis appliques and biker-girl references, Coach creative director Stuart Vevers has spent the last three years transforming the heritage brand (best known for its iconic leather goods) into a contemporary fashion powerhouse. Driving his vision is a counterculture-inspired take on Americana – like that which dominated his recent SS17 ready-to wear collection, where the season’s biggest models sported grunge reworks of the country’s style classics, like destroyed bandanas, frilled floral prairie dresses subverted with sheerness, customised denim and cowgirl leathers all finished off with crystal-dusted cat-eye shades like something you’d see on a John Waters heroine.

“It was interesting – when I first joined I traced Coach’s history against the history of American counterculture,” Vevers shared this morning from a sofa in the brand’s new store on London’s Regent Street. “Coach started in 1941 and it’s really when the word ‘cool’ started to be used – I found that there was a lot of interesting parallels with the birth of youth culture and of the brand.” Vevers (who previously held jobs at Calvin Klein and Louis Vuitton, heading up Mulberry during its stratospheric mid-00s it-bag era) credits his outsider status as a Brit for his ability to take on the US fashion history with ease. “I think being British means I’m able to reference parts of American style and culture that are quite obvious and quite immediate,” he reasons. “I didn’t grow up with them, so they’re kind of exotic to me.”

With the American brand providing a refreshing transatlantic counterpoint to longstanding European houses, Vevers stresses that at the heart of Coach is a desire to make luxury something what people can partake in. “Exclusivity can sometimes just mean excluding,” he reasons. “Coach should always have an ease about it. It should be less precious. It’s not about the idea of perfection – it’s much more about the idea of an attitude.”

The new store is a reflection of this, a conscious rejection of those rigidly formal designer boutiques which seem more designed to intimidate than to welcome. The impressive, American architecture-inspired space boasts a towering, multicoloured Rexy the Dinosaur sculpture, a selfie booth, a made-to-order studio and a customisation area where initials and emojis can be added to items, as well as homely rugs and fuzzy sofas to take a break on. “I wanted the store to feel inclusive and inviting, I wanted it to be warm and friendly,” says Vevers. “I think that’s a big part of what Coach is about.”

To celebrate the opening, the designer took our quickfire pop quiz, answering on everything from favourite films to aliens and what he really wanted to be when he grew up.

Who gave you your first break?

What’s a lesson you learned the hard way?

What’s one book everyone should read?

Stuart Vevers: The Catcher in the Rye.

Which fictional character do you most identify with?

What did you want to be when you grow up?

Were you into dinosaurs as a kid?

Stuart Vevers: I don’t think any more than most kids – but someone did remind me I have an eight foot-tall charcoal drawing of a tyrannosaurus rex in my house.

What posters were on your bedroom walls as a teenager?

Stuart Vevers: River Phoenix and Keanu Reeves in My Own Private Idaho.

Stuart Vevers: ‘My Heart Will Go On’ by Céline Dion.

“Tess McGill, Melanie Griffith’s character in Working Girl. It’s my favourite film” – Stuart Vevers on which fictional character he most identifies with

What’s your favourite place in America?

What’s the best American road trip that you’ve been on?

Which American figures would you dress in your new collection?

Stuart Vevers: I think it’s usually in the most unexpected places. Sitting on a bus is always a good one, I think.

What three words sum up the Coach girl?

What do you love the most about the fashion industry?

Stuart Vevers: I love that it’s fast. I like that it reflects our times.

What is your secret talent?

Stuart Vevers: I can sing.

What do you think is underrated?

Stuart Vevers: Sometimes I think it’s enough that someone just makes you happy.

What character trait do you most admire in others?

Which film do you never get bored of?

“I love that it’s fast. I like that it reflects our times” – Stuart Vevers on what he loves most about the fashion industry

Do you believe in aliens?

If you could choose to own any piece of art, what would you choose?

What’s the last thing you Googled?

Stuart Vevers: I think it was The Human League!

What’s the last lie you told?

Stuart Vevers: I’ll be there in five minutes!