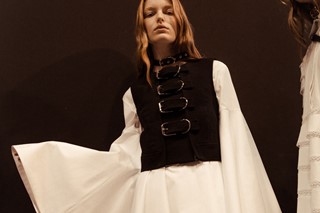 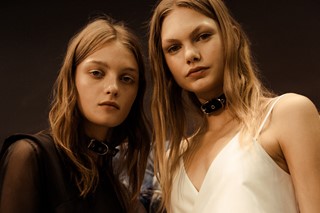 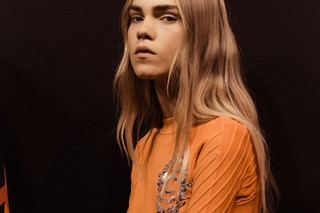 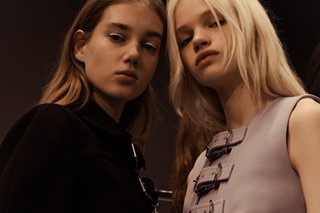 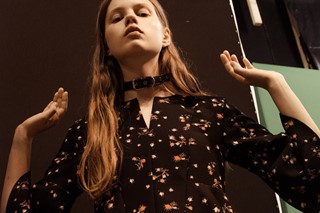 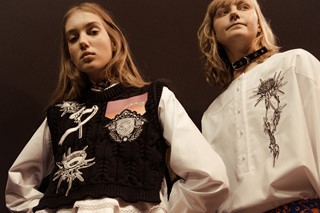 If Madame Carven had an heiress, this is how she would dress. That’s what creative directors Alexis Martial and Adrien Caillaudaud were thinking about this season as Carven’s past, present and future come colliding together in this fictional character’s wardrobe. “The girl around us likes to play with garments, and this time we thought about this character going on holiday with her friend to her family castle, and then turning crazy, layering up pieces from her own wardrobe with heritage pieces,” explained Caillaudaud backstage at yesterday’s show.

Carven’s illustrious but relatively little-known past served as an inspiration for the duo, who sought to stamp in the Carven name into the collection with crest emblems emblazoned onto sweaters and onto shoes. There was also a revival of tradition in archive scarf printed skirts and logo-peppered green stripes, which originated from a summer dress made famous by Marie-Louise Carven in the 1940s. “It was important to bring the heritage of a brand because it’s been more than 50 years now, and people don’t think about what has been done in the past. For us it was important to give this touch of luxury, and also remind people that this was once a couture house,” said Martial. To bring Carven history back to the fore feels pertinent for the duo, who after nearly two years at the brand are finally sinking their teeth into the house’s archives.

Still, this heiress to Madame Carven’s legacy wasn’t simply going to be trussed up in classic heritage pieces. Caillaudaud and Martial dialled up some unexpected zaniness through clear plastic jackets and skirts, and futuristic monochrome floral motifs that looked like spindly robots. “Even though there is some nod to archival Carven,” said Martial. “I feel like we had in mind this past/futuristic mix and we also thought about the 90s when you could have this retro future feeling, with the strong pop-y colours and plastics.” As utilitarian as the straps on a pair of cargo trousers were (echoed in the buckled up dresses), Caillaudaud and Martial’s Carven girl is a rebel at heart with her industrial chokers, and her penchant for the sheer and the synthetic – even as she bears her family crest on her chest.