Supersized wellies, neon make-up and out of this world hair – here’s what you missed 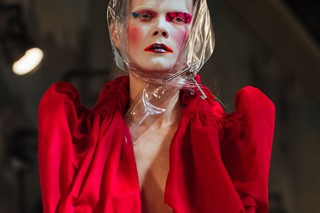 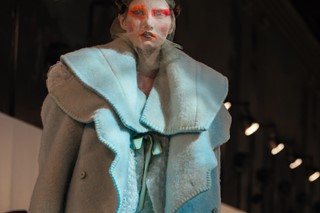 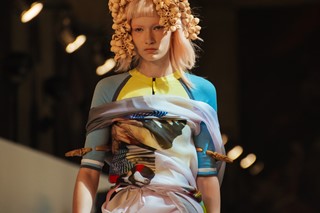 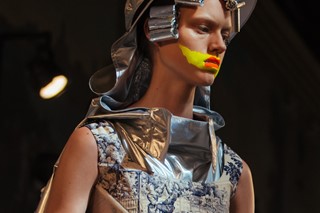 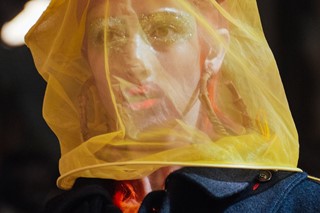 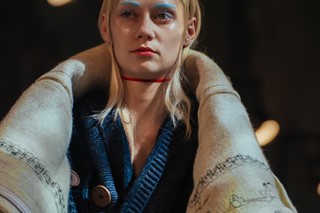 This morning, on the last day of Paris Couture Week, John Galliano presented his AW16 Artisanal collection for Maison Margiela – his tenth offering for the house including pre-collections. The show notes began with four words that encapsulated the spirit of the show – innocence, risk, comfort, and protection – and this translated to an explosive display of clothes that served as a potent reminder of the theatrical and wildly imaginative fashion Galliano is capable of creating.

Two of the show’s most striking looks came with a little thanks from “British Birds”, a photograph taken by iconic image-maker Nick Knight in 2008. Featuring a series of taxidermy birds (including a mallard, woodpecker and blue tit) displayed on an assortment of brightly coloured blocks, the image was patched onto two gowns. One was worn off the shoulders, and teamed up with a pair of pale turquoise fingerless gloves and a hairpiece seemingly constructed from semi-deflated balloons.

From netted beekeeper hats, Napoleon Bonaparte-esque bircorns and caps with hugely elongated brims, Galliano put on a display of outrageous and off-kilter accessories this season. As for shoes, he sent his models down the catwalk in thigh-high waders (split at the toe, as per the house’s signature), stout Wellington boots and patterned clogs.

Revered throughout the industry as one of fashion’s most imaginative beauty alchemists, Pat McGrath didn’t hold back when it came to the models’ make-up. She applied broad strokes of neon colour to their faces – mask-like smudges across their eyes, pastel hues onto their eyebrows and glitter to their lips and cheekbones. The looks she created were as extravagant and theatrical as Galliano’s designs themselves.

THE HAIR WAS SURREAL AND TWISTED

When their hair wasn’t covered by elaborate headwear, legendary stylist Eugene Souleiman gave models an array of outlandish ’dos. He slicked their hair down and created rolls like those belonging to the wigs of lawyers or aristocrats; or else fixed them with hairpieces made from deflated balloons (as previously mentioned), floral appliqués and something akin to strawberry laces.

THE CASTING WAS A KNOCK OUT

The show also saw a gang of fashion’s most in-demand models take to the catwalk, such as Anna Cleveland and current Dazed cover star Yasmin Wijnaldum, who closed the show. Platinum-haired San Fran girl Sarah Abney opened the show in an upside-down coat worn with tabi-toed wader boots – an experience which was very special for her. “Maison Margiela is a visionary house in the world of fashion and design,” she said on Instagram. “To open John's show was an unforgettable, magical moment that I will cherish forever. A big thank you to all for making this possible.”