Wanting to ‘break’ traditions of tailoring to make it relevant for today, the Vetements designer unpacks his menswear debut for the house 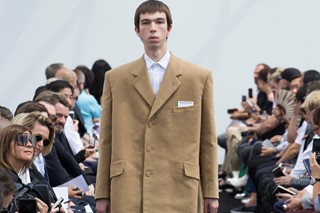 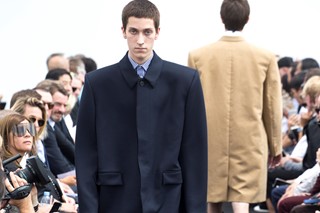 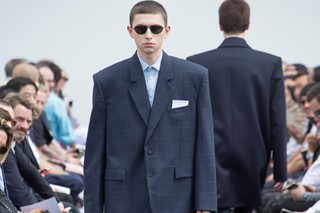 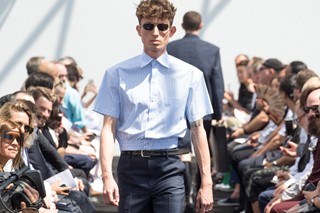 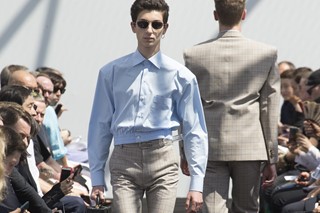 Suited yuppies meet The Matrix, via the Vatican. Those were just some of the references that could be gleaned from Demna Gvasalia’s much-anticipated debut menswear collection for Balenciaga, which saw a cast of models stomp down a narrow runway elevated six floors above the streets of Paris and open (almost) to the sky. With an incredible panoramic view featuring none other than the Eiffel Tower, the shows setting served to place the Vetements designer firmly in the historic landscape of the Parisian house, not just in the city’s underground.

The starting point for the collection was a coat. Discovered in the archives by Gvasalia, it was a garment that the house’s founder, Cristóbal Balenciaga, began but never finished. It was an appropriately symbolic piece with which to open the Georgian designer’s first menswear show, one that explored the idea of tailoring as the male equivalent of haute couture. “With the womenswear we worked with constructing the attitude,” Gvasalia explained. “With menswear it’s more about the shape.”

Suiting was the collection’s dominant theme, with the designer wanting to “(bring) classic tailoring as we know it out of its usual frame” – silhouettes were either oversized or super-skinny, 80s power dressing versus the 60s masculinity of Mr Fish’s closely cut velvet. In fact, the notecards placed in breast pockets were a reference to the measurement cards of bespoke suit-makers like him, in what Gvasalia called “a little wink to the idea of where the tailoring comes from, the perfection of tailoring that I wanted to break with this collection”.

“(It was) a little wink to the idea of where the tailoring comes from, the perfection of tailoring that I wanted to break with this collection” – Demna Gvasalia

Still, nothing felt retro – pieces were worn with bare knees, cropped shirts and platform boots. “I wanted the styling to actually be cool and not classic and uptight,” said Gvasalia, and the casting had a lot to do with that. All models were discovered by Eva Gödel, the founder of German-based agency Tomorrow Is Another Day, who travelled for a month to find them. Apart from a couple (including Vetements muse Paul Hameline), all the boys were making their runway debuts. “They should all be really unique but still fit like a gang, like a force,” Gödel revealed of her brief. “They must be strong characters – and in these outfits, with the shoes, you have to have a strong attitude.”

That attitude is what Gvasalia described as uniting the men’s and womenswear sides of his vision for Balenciaga, having made his debut for the house with a womenswear collection back in March. “For women, it’s an idea of a strong, elegant, modern woman, that really steps very hard when she walks. This one is not so much about elegance, it’s more about the polish – he’s very polished, his shoes are shiny! But he steps the same way she does when he walks.” With Vetements, Gvasalia has demonstrated his ability to create street-ready clothes that truly influence both the way people want to dress and other designers (just look at the abundance of super-long sleeves and black-letter fonts appearing in collections). Balenciaga provides him with a different challenge, but it’s clear he’ll have just as much to experiment with through the mediums of couture and tailoring as he does with hoodies and t-shirts.