Dogs on the runway, Chanel-branded surfboards and high-fashion Y-fronts – here, we look back at eight of the house’s most memorable shows 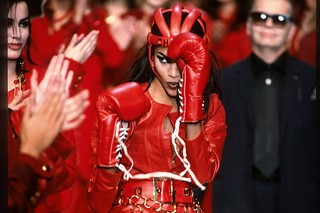 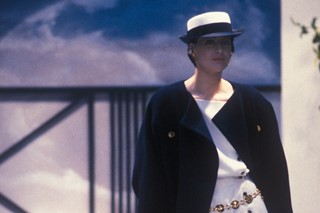 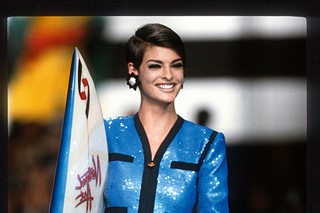 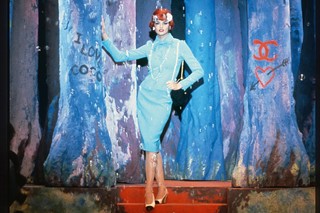 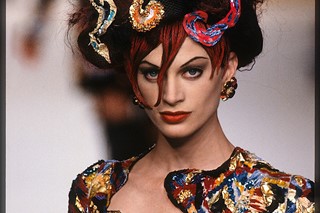 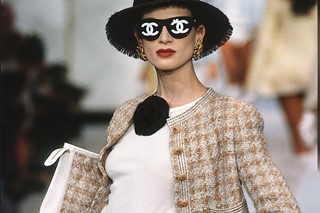 Making his first public appearance on January 25th 1983 at 31 Rue Cambon, designer-of-the-moment Karl Lagerfeld took the reigns at Chanel. Having already made his mark at Chloé and Fendi (the latter of which he’s still creative director of today), Lagerfeld was tasked with the feat of updating an haute couture house perceived as near-dead.

Starting off by exaggerating existing codes established by Coco Chanel – interlocking C’s, camellias, chains and costume jewellery – that had become somewhat lost between the 50s and the 80s, Lagerfeld created a new Chanel uniform, a wardrobe that epitomised the term “must-have”. Cleverly combining the femininity of 1930s Chanel (gypsy dresses and flowing silhouettes) and the masculinity of the 1950s (structured tweed suits), Lagerfeld’s vision was entirely forward-thinking while referencing the past. The outcome: aspirational fashion, elegant while playful, sassy but chic.

Thanks to the release of Chanel Catwalk: The Complete Karl Lagerfeld Collections, we’re now able to gain a 630-page insight into the creative polymath’s mind. Charting the highlights of each of his runway collections from 1983-2016 in chronological order, we recall everything from Lagerfeld’s first ready-to-wear collection “A Faster Beat” described by Suzy Menkes as giving, “a whole new momentum to modern dressing”, to Linda Evangelista’s many runway accessories that ranged from a cabochon-encrusted mobile phone to a full-size surfboard in Chanel’s SS91 “City Surfer” show.

Now in his fourth decade at the house, fashion’s current game of musical chairs has sparked many a speculation of Lagerfeld’s departure from Chanel. And, having worn a Hedi Slimane for Saint Laurent gold jacket at the Chanel Cruise show in Cuba last week, the former creative director is now rumoured to be first in line for the post. For now, take a look back at 10 of the most entertaining throwbacks in Lagerfeld’s 33-year strong Chanel archive.

Lagerfeld stepped away from the padded shoulder du jour for Chanel’s SS86 haute couture collection, choosing to cinch in and elongate the waist instead. While the focus of the clothing leant towards navy, black and white long-line skirt and jacket suits, the accessories added antique charm. From interlocking-C charm bracelets, chain belts and intertwined pearl and chain chokers, to leather gloves and sailor-esque boater hats. Meanwhile, an unexpected guest made an appearance on the catwalk, an obedient labrador wearing a quilted-leather Chanel collar, no less, alongside his owner model Inès de la Fressange.

No, Chanel surfboards aren’t a Tumblr myth. Taking Chanel’s most iconic elements – camellias, pearls and quilted bags – and shaking them up, Lagerfeld’s new look was dubbed “City Surfer”, because as he told Vogue, it was “perfect for diving into the nightlife from Paris to Rome to London to New York”. Chanel’s gypsy dresses received a 90s reinterpretation: sportier and sexier, worn on top of leotards that were revealed later in the show. Meanwhile skin-tight leggings and cycling shorts were worn with sequined jackets, strings of over-sized candy-hued pearls, flamboyant camellia head bands and surfboards – à la Linda Evangelista – to boot.

SS92: “A VISIT TO THE ENCHANTED FOREST”

For SS92 Lagerfeld looked to nature for inspiration. Quilted bags came in the shape of magical mushrooms and deconstructed straw hats were ripe with berries, whilst models in blue and white pinstripe dresses and a cornflower blue re-make of the iconic Chanel suit, hair in bunches secured by oversized velvet bows, walked the catwalk carrying an arm full of wheat. The set resembled an enchanted forest imagined in a childhood dream. Towering blue tree trunks came sprayed with red arrow-shot graffiti hearts and school notebook style “I love Coco” love declarations.

Described by Women’s Wear Daily as, “Jackson-Pollock-meets-Janis-Joplin”, Chanel AW93 was inspired by the expressionism of the 1930s and the care-free mood of the 1970s. Headwear played a big part in the show and Lagerfeld enlisted none other than milliner Philip Treacy for the job. Wigs hand-painted in primary colours morphed into extravagant colourful hats crafted from all manner of materials. Lagerfeld’s brief? To look like a “child had made them in a play corner”. Lagerfeld also told WWD that the embroidery we saw patched on velvet dresses, suits, and in Kristen McMenamy’s wig was designed to look like the “inside of a trash compactor in a rich house on the day after Christmas”. Potentially the best Chanel show notes we’ve heard to date.

From now on we’re only wearing Chanel Y-fronts. White with the Chanel logo emblazoned on the waistband, chain belt optional. “Women have stolen everything else from men, why not their underwear?”, Lagerfeld told WWD at the time. With an interlocking-C that sat suggestively at the center of the Y-front, they came paired with triangle bikini tops worn under silk robes with matching headscarves, or teamed with a classic white men’s vest, a pastel boucle jacket, and double-C lens sunglasses. These were undergarments designed for outerwear, trousers simply weren’t necessary.

A celebration of Coco Chanel’s life, SS98 was divided into six segments, each spanning a 10 year period. From “Coco Before Chanel” to “Chanel Now and Next” – the collection revisited the classic Chanel tropes: the skirt suit, the gypsy dresses, and an array of multi-coloured tweeds. Chronicling periods of the Mademoiselle’s style, the 1920’s inspired jersey bathing suit segment was a favourite at the time, the most memorable worn underneath a boxy black blazer with knee-high heeled boots and a black beret by a 24-year-old Kate Moss.

Lagerfeld’s SS02 collection was all about speed. A thrill seekers dream, the pieces that played out on the winding Perspex catwalk ranged from full red leather biker gear (complete with a Chanel racing helmet, of course), to padded sports jackets that adopted the quilting from the famed Chanel 2.55 handbag. Served in a shade of powder blue and worn with red-trimmed gym shorts, a metal stopwatch that hung on a Chanel lanyard provided the perfect necessity-turned-accessory for a day on the track at the Monaco Grand Prix.

Having dressed a laundry list of A-listers – Marlene Dietrich, Romy Schneider, Nicole Kidman et al – for many a red carpet event, Lagerfeld re-created Baz Luhrmann’s Chanel No5 advert on the catwalk for SS05. Where there’s a red carpet, there are supermodels. Soundtracked by David Bowie’s “Fame”, the likes of Linda Evangelista, Amber Valletta, Shalom Harlow, Kristen McMenamy and Naomi Campbell walked the runway-turned-red-carpet in Oscars-ready black silk, lace, velvet and satin evening dresses, whilst being papped by the paparazzi in the pit at the end of the catwalk. The pièce de résistance? The low-back velvet column dress worn by Kidman in the No5 advert, complete with a white-gold and diamond “No.5” pendant necklace hung at the back.