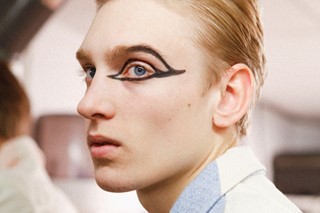 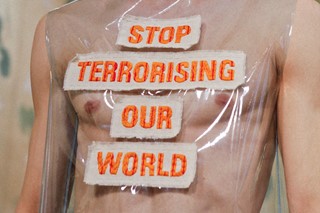 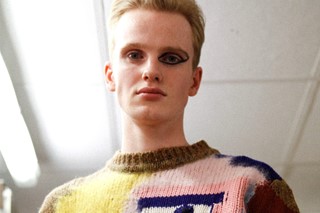 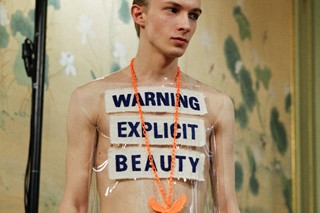 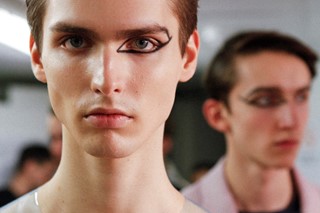 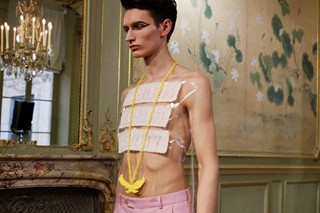 “Stop terrorising our world” read the message on a long plastic tunic in Walter Van Beirendonck’s AW15 collection, which was debuted at Paris Fashion Week in January 2015, just weeks after the Charlie Hebdo attack. Since then, Paris and Brussels have been the victims of two further terroristic attacks – in November 2015 and more recently in April of this year.

Now, Van Beirendonck’s tunic has become the symbol that rival Belgian fashion schools – Royal Academy of Fashion, Antwerp (where the designer is head of fashion) and La Cambre Mode(s), Brussels – are using to announce their annual fashion shows. The idea was the brainchild of acclaimed photographer and Dazed contributor Pierre Debusschere and La Cambre teacher Pierre Daras.

“Pierre Debusschere and Pierre Daras contacted me shortly after the attacks in Brussels asking if they could shoot that specific piece for the poster of La Cambre’s annual fashion show,” explains Van Beirendonck.

“As head of the fashion department, I am very connected to Antwerp. At first the request seemed a bit strange but immediately afterwards, I realised the power of such a statement should both schools send out the same message. It is time that we get rid of the alleged separation between fashion in Antwerp and Brussels. Plus, obviously this is also a political message against terrorism.”

“Belgium is magic! I never lost myself in this community rivalry, and we thought it would be great to show a creative united Belgium after the atrocities our country had endured,” adds Debusschere.

“It all came together very organically, Walter and Tony (head of La Cambre Mode(s), Brussels) were immediately on board when we explained them the concept. I love that this is beyond the images. It is a big and very powerful message that will be spread on all the streets of Belgium, and I’m proud we could achieve this all together.”

While the tunic featured in the Van Beirendonck’s AW15 show, the slogan comes from his AW06 collection, also titled Stop Terrorising. “I brought back this slogan because of what happened in Paris two weeks ago,” he said in an interview with French newspaper Le Point, commenting on his decision to resurrect it. “Initially, I didn’t want to make statements but when you see what is happening in the world, you must react.”