Kali Arulpragasam’s new Super Fertile collection is a very special celebration of inventors and scientists who have enhanced our lives with their work. 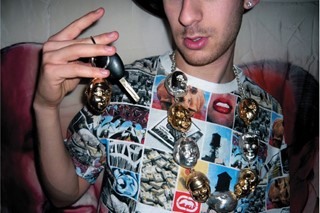 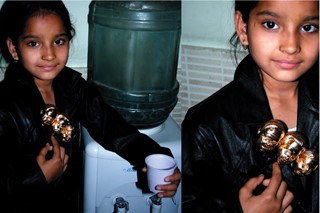 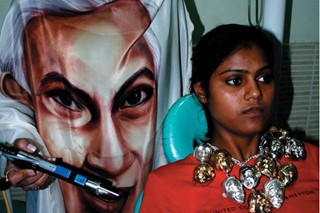 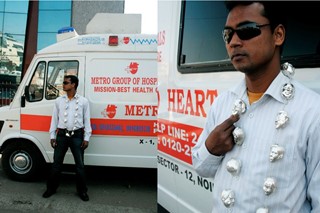 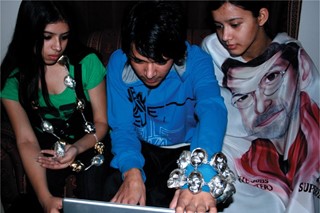 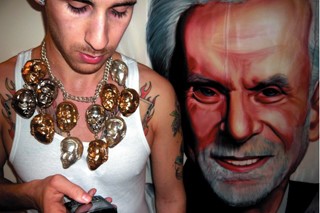 All that glitter is not gold, but can definitely help spreading out positive and inspiring messages. At least that’s what Kali Arulpragasam thinks. Since launching her jewellery brand Super Fertile in 2006, Kali has been tackling through her pieces vital issues affecting our modern lives, from endangered animal species to countries torn by wars and the world food crisis.

The new collection mainly features necklace montages of the heads of the super stars in question. The pieces were made starting from 2D images, which in some cases were given to Kali by the inventors themselves. A China-based artist turned the images into 3D wax sculptures and then Kali’s production team in India sculpted the heads in bronze and copper and plated them in gold and silver. “The Real Super Stars” also includes a series of headscarves, featuring the inventors’ hand-painted portraits.
Dazed Digital: What inspired you the concept behind the new collection?Kali Arulpragasam: The concept behind the new collection had been kind of lingering with me for a while. “The Real Super Stars” is inspired by being annoyed with our current obsession with celebrities, famous people who are on the screen and on the stage and dominate every day our life and pays homage to inventors and scientists who changed with their work our world. Most of them are still alive and they are carrying on living their lives in a very quiet and humble way, you wouldn’t know what they created and they don’t brag about what they have done.

DD: What’s the final message behind “The Real Super Stars”?Kali Arulpragasam: With “Tourism” I tackled a very specific concept, how human beings destroy everything they build, but with this collection I want to inspire people to use their time and money inventing new things, rather than employing them to unleash wars, making in this way the world a better place.

DD: You come from an advertising background, do you feel that your jewellery can “advertise” and spread your messages?Kali Arulpragasam: Jewellery goes back to before we made clothes, way back to before we could even speak. It’s something people use to express themselves, from cavemen and tribes to our modern times. Even without opening your mouth when you wear jewellery, people can see if you are married or single, if you’re wealthy or poor or if you like punk or hip-hop. Jewellery is something that expresses the wearer’s identity and many pieces are made in metals that can be put away for 500 years and then picked up again, yet they still preserve their intrinsic message. I feel that jewellery allows me to do anything I couldn’t do while working in advertising: it allows me to use something intimate and personal such as my neck, wrist or arms, to spread a public message and reach out to people.
DD: What kind of materials are you planning to use in the future?Kali Arulpragasam: I put so much work and time into my designs, so I want them to last forever and I want people who buy my things not to be worried about rain and sunshine or swimming into the ocean, this is why I’m always looking into new materials. For my ‘Hunger’ collection, for instance, I used stainless steel mesh, which is usually employed in different applications such as silk screening. In future I’d like to use space technology materials, though at the moment I don’t know much about them. In fact if you know anything about such materials, please get in touch with me by email.
DD: What’s the best thing about your job?Kali Arulpragasam: That it has allowed me to reach out to so many different people I never thought I would meet.  It’s simply amazing where my journey has taken me, you wouldn’t expect a jewellery label to take you this far! Now I’m emailing scientists and inventors and they’re emailing me back and I find it so exciting and often wonder why and how I didn’t do this before.

DD: Did you manage to donate any of your pieces from the “Tourism” collection to the museums in the countries that inspired your breastplate-style necklaces? Kali Arulpragasam: I wanted to, but in many of them there are still wars, so I’ll have to wait until they are over.  The reason why I started “Tourism” and did a necklace inspired to Sri Lanka was because I went there ten or twelve years ago and visited the local national museum. There was hardly anything in it and I felt nobody was really taking care of passing on the local history and identity to future generations. I would love to be able to give a piece to these museums and see this donation as a way to start again the collections and build something back. I live in London and I’m surrounded by art and beautiful inspiring objects showcased in many local museums, but in these countries young people aren’t as lucky as me. Museums are vital in the development of young people. I grew up in London and conceived museums as my personal temples, so I think it would be very important to help rebuilding art and history collections in war-torn countries as soon as possible.

DD: What’s in store for your brand?Kali Arulpragasam: A collaboration with a brilliant designer in the UK for the September catwalks at London Fashion Week, though I can’t mention the name of the designer yet. Besides, I might also go to Paris for the first time in September.
Read More