The Biba spirit lives on in this new collaboration between one of Britian’s fashion legends and Topshop. 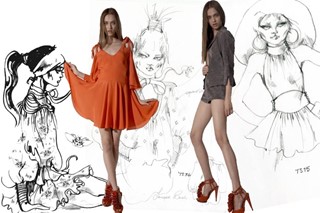 You can almost see the queues of 40 something year olds gathering outside Topshop Oxford Circus next Tuesday when the Barbara Hulanicki for Topshop collection drops. They might reminisce over the one quid dresses they picked up at legendary 60s-70s emporium Biba. You wonder why it has taken Hulanicki, the woman responsible for reasonably-priced disposable frippery to hook up with Topshop, where the legacy of what Biba did in its heyday still lives on. For this first collection, Hulanicki has envisioned a good girl and a bad girl, wearing flirty puff-shouldered dresses, dramatic wide trousers and grey suede jacket and short shorts and body-con off-shoulder dresses. Prints have been developed from Hulanicki’s whimsical sketches of dreamy girls from another world proving that Biba’s founder still has an eye that might see more fashion from her that is yet to come.

Dazed Digital Why Topshop?Barbara Hulanicki: Because they asked!

DD: As simple as that? Were you ever tempted to launch on your own?Barbara Hulanicki: Yes! I hate production! I know too much about it and it's a nightmare. It's really much more fun this way. It's just designing and they (Topshop) do all the work.

DD: How did the collaboration work?Barbara Hulanicki: I first met Charlotte Henson from Topshop because I had an illustration exhibition and she asked whether I’d like to collaborate. I just sent her a ton of drawings that they sifted through. They worked very much to see what was missing at Topshop, where there was a gap and looked at the things that were selling. So they worked from a really practical point of view.
DD: Did you reference Biba in any way?Barbara Hulanicki: Actually I was asked not to do anything that looked like Biba. I was like "Ok!" but I think I picked quite Biba-looking things in the end. There was a lot of Biba publicity at the time you see.

DD: What do you think of the current state of Biba (having changed designers twice Barbara Hulanicki: It's resting at the moment isn't it? Somebody else will think they can recarnate it I suppose. They do every two or three years. Some business man comes along and thinks "Biba - a couture house!" but they get it all wrong.

DD: Do you think the Biba legacy lives on in our shopping culture?Barbara Hulanicki: Really, we came up at the time when there was nothing as far as (high street) fashion. We were the first mass producing company that did mass at really good prices. Prices for women that had jobs, lived in bedsits and had left home. There's a very strong legacy that lives on at Topshop actually.

RIP hypebeasts: Miu Miu is now the hottest brand in the world
FashionIncoming