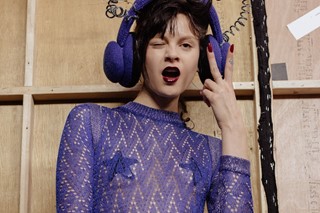 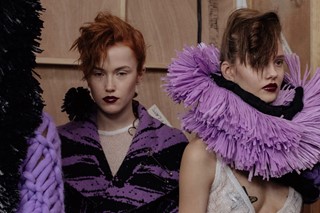 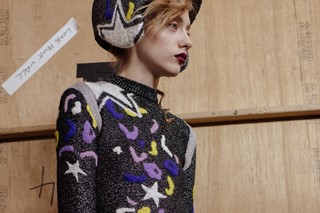 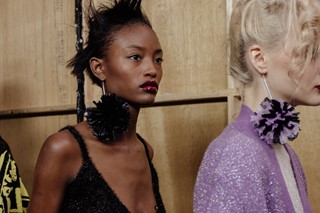 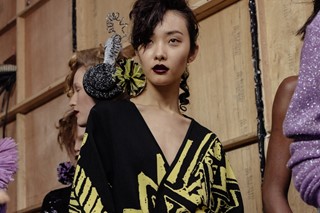 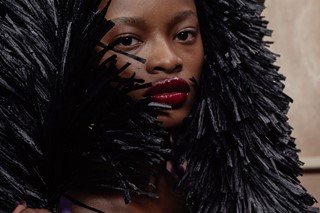 “Why not?! I mean, she’s fabulous!” said one-half of the design duo, Cozette McCreery, when asked why they chose to base this season’s collection on the icon.

“She’s amazing!” added the other half of the duo, Sid Bryan. “We were just saying, ‘Oh, you know, she’s super, super strong and she’s a real tomboy’, there’s such a masculine edge to her. A lot people talk about gender fluidity and she’s got that, (we think) in a very Sibling way. It’s not about being a woman and having long blonde hair. It’s about being yourself.”

Specifically, McCreery and Bryan looked to Jones’ Portfolio album cover for the lilac ‘Party Girl’ cardigan and the hooded fine knitted lace playsuits. With strong references to 1970s clubbing garb, lurex abounded throughout the collection, appearing in lilac, yellow and blue. Of course, Sibling’s true brilliance lies in the incomprehensibly complicated knitting techniques they employ – this season, for example, they

But of course, Sibling’s true brilliance lies in the incomprehensibly complicated knitting techniques they employ; this season, for example, they wove tinsel into some of the fabric.

More so than previous collections, this one had a sense of sexuality – something which was clear from the nipple pasties, the abundance of sheer fabric and the dresses that split above the thigh. This season, the Sibling girl was out to party – Grace Jones style.