Marc Jacobs on the front row, top models on the catwalk and new collections from four of fashion’s most exciting emerging designers 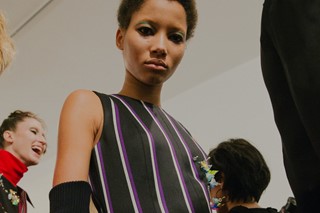 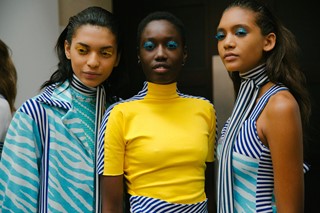 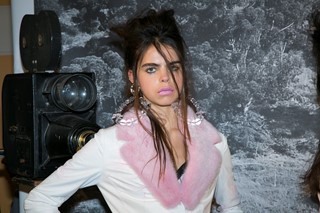 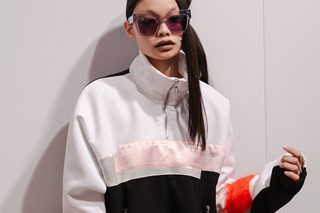 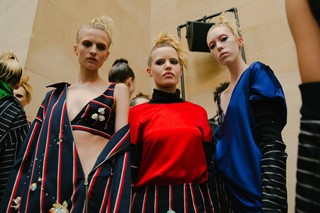 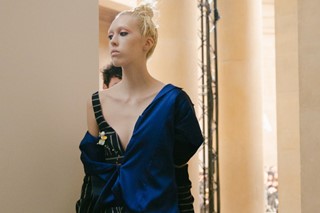 Staged at Tate Britain, this morning’s Fashion East show saw a quartet of London’s emerging designers present their AW16 collections. There was a particular buzz about the show – not least because Marc Jacobs was in attendance, there to support A.V. Robertson, a former intern. For Robertson and Mimi Wade, this was their debut but for Caitlin Price and Dazed 100 designer Richard Malone, this was their second time on the Fashion East catwalk. Thanks to Lulu Kennedy, the initiative’s shows always demonstrate the fearless creativity for which London is known – and today’s was a prime example of that fact.

“Bring more glamour and fun back into everything,” said one Central Saint Martins student, when we asked a selection of the school’s graduates how they want to see the fashion industry change. Right on cue, British-American designer Mimi Wade presented her AW16 collection – a tongue-in-cheek ode to the female 1960s film stars.

Wade’s cast, which included cross-eyed model Moffy Gathorne Hardy, stood against a backdrop which reflected this theme: a blown-up image of the Hollywood sign. “I was looking at my favourite female protagonists: Catherine Deneuve in Belle de Jour (1967), Marianne Faithfull in The Girl on a Motorcycle (1968), Faye Dunaway in Bonnie and Clyde (1967),” the designer said.

“I realised they were all from the late 1960s and they were all about powerful women who had deserted their boring lives in pursuit of their own personal liberation. I designed a collection inspired by those characters.” Styled by Anna Trevelyan, this translated to dresses and coats emblazoned with graphics from film posters of this era – trimmed with fur and lace.

This season, Caitlin Price continued her exploration of nightlife. “A girl walking home from a night out and trying to hold it all together,” is who she had in mind when designing this collection. “And she’s a bit trashy,” she added.

In fact there was a specific girl who embodied the South London-born designer’s: a girl named Valeria, who added her on Facebook one day. “She’s my perfect muse,” said Price, ”She’s kind of gothic chola with her facial piercings.” Models had (presumably fake) piercings too – under their bottom lips and eyes, and through their cheeks.

As for the collection itself, Price said she was referencing 1960s eveningwear, transposing those draping techniques onto modern-day sportswear silhouettes. Rendered in her signature pastel colour palette,

While it’s become relatively common for designers to reference the styles of the British working class – when it comes to price, she know what she’s doing and she does it well.

“Alien wanderers” is how the show notes described A.V. Robertson’s AW16 girl. The idea for the collection – which featured striped silk pieces embellished with crystalline flowers – came from the Mancunian designer’s subconscious. “I have really vivid dreams, I don’t really sleep at night. And that’s when I think of most of my ideas, during the night.”

The collection may have been put together in her parent’s living room in Manchester but it was styled by super-stylist Katie Grand who brought with her a roster of first-class models: Edie Campbell, Anna Cleveland, Georgia May Jagger and former Dazed cover girls Molly Blair and Lineisy Montero.

Wanting to bring elements of couture into women’s everyday wardrobes, Robertson dubs her clothes “casual couture”. While the embellishments may have a ‘high-end’ quality, the cut of the clothes themselves did ensure this sense of casual.