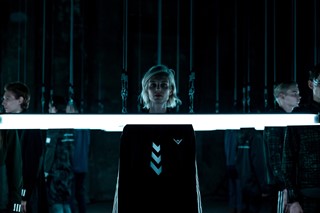 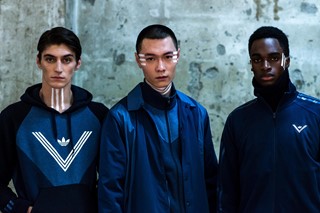 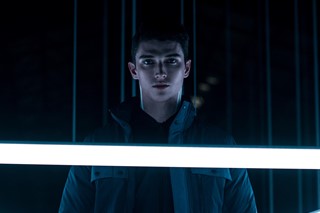 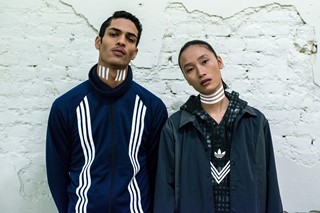 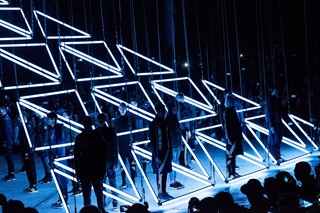 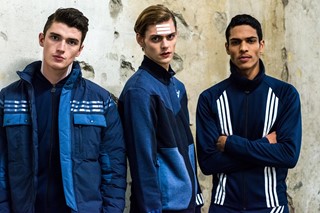 If there’s one design symbol that actually warrants the much-abused ‘iconic’, it’s probably adidas’ three stripes. Last night, as the sportswear giant reunited with Japanese brand White Mountaineering in Florence at the Pitti Immagine fair after their spring 2015 collaboration on the Stan Smith, those famous white stripes were reinterpreted as new bold visuals, cut and placed at angles and drawn onto the models’ skin. Part warrior face paint, part commentary on the kind of tribe, community and ‘under your skin’ brand allegiance that adidas inspires.

We were in the belly of the disused Stazione Leopolda and its industrial railway architecture, where models in Goretex shell jackets and SEE-U-LATERs took their place on the floor before LED triangles were lowered around them one by one. Blurry, checked camo gave way to slick layers, and the White Mountaineering mountain and adidas triangle morphed into a v-shaped white arrow before the lights were raised into one big shape, pulsating and tilting around the cast.

Since launching White Mountaineering in 2006, Yosuke Aizawa has come at fashion armed with outdoor, utilitarian gear for surviving off-piste. A hardcore snowboarder, he works around utilitarian garments but without the coldness that sometimes comes with that. Like Nic Galway, adidas’ Vice President of Global Design – who has orchestrated many of the label’s blockbuster collaborations, including this one – he speaks of feelings, of collective memories.

If nostalgia and technology can sometimes seem at odds, the White Mountaineering and adidas Originals project brings them together. And Aizawa and Galway share more than a design philosophy: Where Aizawa snowboards his way through winter Galway’s summers are spent climbing mountains. We caught up with the two design masterminds and mountain lovers ahead of their show last night for a conversation about wanting to take familiar codes into unchartered territory.

You’re at Pitti Immagine, a menswear temple built on the foundations of traditional tailoring. What’s that like to be here as a sportswear brand?

Nic Galway: It’s incredible. I got off the plane yesterday and driving into the city you see what you just described, but what I really love is that Pitti is open-minded. You know, future generations expect the boundaries to be broken down and the very fact that we’re working together and showing here, yeah it’s a bold statement but I think it’s really fun.

Yosuke Aizawa: I’m interested in opposites, like tradition and innovation. Showing something sportive in this culturally traditional city, it’s really interesting as a contradiction. When I visited the Fortezza da Basso yesterday [the Pitti Immagine fair location] I saw lots of people wearing suits with sneakers or suits with a down jacket. You can see the mixture already.

Before, men would maybe aspire to a Savile Row suit and now they aspire to a tracksuit. What does that say about where we’re at today culturally and in terms of menswear?

Nic Galway: I think the codes of the past have been broken down. When I joined adidas back in 1999, the categories were really strict. Like, this is fashion, this is streetwear, this is sport. And that’s all been broken down. We’d never try to tell people how to dress but we’re really interested to see how culture adopts what we create.

Looking at the grime scene for example, it’s interesting how the typically ‘working class’ aesthetic of the tracksuit has been transformed into something that middle class guys really aspire to.

Nic Galway: It’s interesting to me because in the eighties, sportswear allowed you to elevate your status. The labels of that era weren’t widely available and people had to search them out through Europe and they had a status about them. I think in later generations, fashion filled that void perhaps. I think the role of adidas in the cultures you mention was around one of prestige, of showing you were well dressed, albeit in sportswear. And it’s very exciting to see that come back.

“I think the codes of the past have been broken down. When I joined adidas in 1999, the categories were really strict. Like, this is fashion, this is streetwear, this is sport. And that’s all been broken down” – Nic Galway, adidas

Yosuke, what’s it been like to work on something as holy and sacred as the three stripes? Were you in any way intimidated by that?

Yosuke Aizawa: I always want to create something new and innovative, so for this opportunity I didn’t actually think about that. The desire to create something with the three stripes came first, and this is the luckiest thing I could ever have done as a designer. Plus, everyone said I could do work as freely as I wanted. (chuckles)

Nic Galway: And I think that’s really important. I’ve worked on many collaborations during my time at adidas and I don’t think there’s a point in collaborating if you want to tell someone what to do. We want to collaborate for many reasons and one of them is to see how others see us. If you want to do that you have to be bold and open. I’ve been here a long time and I love the three stripes but then you meet someone who has such passion and they do something different. And it’s challenging and some people will be like, should we do that? But of course we should because it’s done with integrity. I also love the logo because White Mountaineering is the triangle so it’s kind of the perfect fit.

And how do you see logos and branding now in comparison to the eighties and nineties for example? What do you think it represents to people today?

Nic Galway: (Yosuke and I) talk about the atmosphere. For me, White Mountaineering is a very progressive, modern brand but also a brand that loves tradition. And we have this amazing archive but if you take that amazing archive and you put the traditional branding on it, you get stuck. I don’t think there’s a set answer but in this partnership I love the use of the bold, very modern progressive striping and branding, together with the very iconic lines of the past. It makes the past look so current and new.

Yosuke Aizawa: It’s true that nowadays a lot of people don’t feel the status of wearing something grand and prefer to wear something that fits them. And with fit I mean a feeling, not a size. For me, the three-stripe isn’t about branding. It’s more like design or a graphic element. But also iconic for the brand.

Nic Galway: It’s a nice way of looking at it because for me, I think there’s a whole generation of consumers right now who love the past but they expect more. And I think that’s very unique for adidas as a brand, especially in Originals, but also through this partnership. We have the opportunity to say, ‘What we create is somehow familiar to you but it’s also completely new’ and that allows people to buy into the future. It gives a context to the future, which is really important. If you just go full-on future, I think you lose people.

Speaking of feelings and the familiar, Yosuke, do you have any memories of adidas from when you were growing up?

Yosuke Aizawa: Beastie Boys. For me, the adidas memory is not only about product but about atmosphere. It’s from music and the culture behind it and around it. adidas probably didn’t set out to create this atmosphere from the beginning but people love adidas and it creates this atmosphere and they want to embrace it and make it a part of themselves and that fits into adidas and creates this universe.

Nic Galway: That’s a great answer. I like the word memories when I work with my creative teams, I’d much rather they work off off the memories rather than be too literal. Because when you get literal, that’s like a museum. I was born in the seventies and grew up in the eighties and I have very clear memories of that – or my interpretation of my memories – but when you see the actual reality it may be slightly different. And I think if you can connect with these memories – because that’s what people love about the brand – but not be afraid to do something new, that’s great.

There’s a big discussion right now about streetwear as a term, and a lot of designers are distancing themselves from that because it feels too restrictive or ‘label-y’. How do you feel about the term sportswear?

Yosuke Aizawa: For me, maybe adidas can be viewed as a sports company but their influence and what they’re giving to the fashion world is much bigger than that, and it’s only getting bigger.

Nic Galway: I don’t like to put categories in place. I think the whole point of what we’ve done – and it wasn’t really planned, it was more of an experiment I guess – is that it has broken down the boundaries. I see it a lot right now. What’s going on outside the show is often more interesting than what’s going on inside the show. Then you see the real lovers of the brand, you see how people are mixing utility products, sport products, fashion, and being very free with it. I don’t think that fits into any category. I think many brands can make something that looks like sport and therefore it’s called sportswear but what we’re able to make in these partnerships that we do is the very best innovations in the industry through a different context. I wouldn’t want to put that into a box. I think corporations in the future won’t look the same and I think the ones who are open-minded will be the ones who succeed.

Yosuke, your work comes from a very extreme sports, outdoorsy angle which is now becoming such a big part of an urban landscape.

Yosuke Aizawa: Whenever I have some free time I always go up into the mountains and I’m always snowboarding. After Pitti and before Paris I’m taking three days off to go snowboarding. Outdoor sports are such a big part of my life. Whenever I do sports I experience so many things and it’s recorded in my body and that’s probably the source of what I create.

Nic Galway: And that really reflects why we wanted to partner in the first place. When you talk about fashion, we sometimes forget that people have lives. What I’ve always admired in White Mountaineering’s work is there’s a sense of utility and purpose. Yes, it’s fashionable and stylish, but goes beyond just how it looks. There’s a real thinking of functionality and quality to that.

Yosuke Aizawa: I’m a fashion designer but I’m not the one to sit and design inside a locked room. I want to experience what I’ve made, and see it and wear it and use it. I’m probably not the old-fashioned, very serious designer.

It’s real life rather than the gilded salon.

Nic Galway: Exactly. And maybe that’s the result of the last decade or so. Breaking down the boundaries and finding a new purpose.