After her turn in Pierre Debusschere’s winter issue shoot and film, Kadri Vahersalu talks working with naked people, Justin Bieber and why she cried when she walked Dior 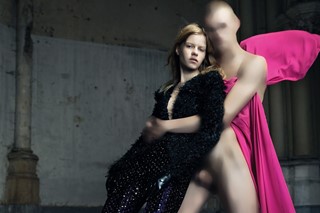 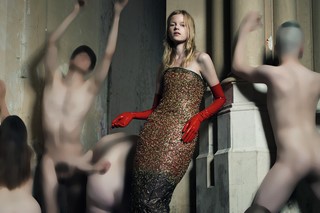 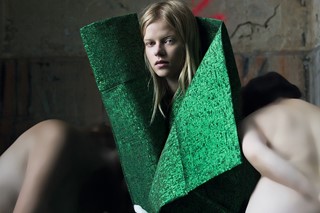 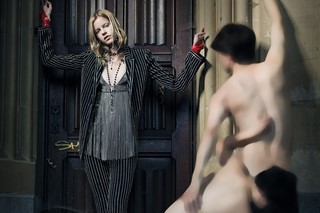 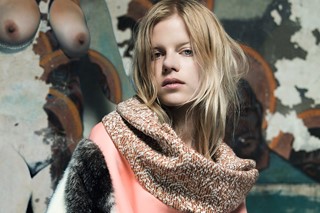 You won't find model Kadri Vahersalu on Instagram or Twitter, but you'll still spot her at the still centre of the season's most electrifying fashion moments – from walking what turned out to be Raf Simons' final outing at Dior, to dancing like nobody's watching to "She’s Lose Control" for a Gucci Cruise dance party. In person, she's pretty shy – not the girl you'd expect to find taking over an abandoned church with six extremely naked companions of an afternoon. But that's exactly what she did for Dazed's winter issue, wearing the season's most radical couture as styled by Katie Shillingford. Shot by Pierre Debusschere, the twisted vision combined Hieronymous Bosch paintings and social media censorship for a starkly unique result. We caught up with the model of the moment on a recent trip to London – where, after inevitably getting caught in the rain, she told us why she loves Justin Bieber and Raf Simons equally (but for quite different reasons).

The shoot and film are incredible. What was your experience of that day?

Kadri Vahersalu: It was in Brussels in an old church. They told me that priests used to live there, then at one point it was a homeless shelter, then a party place. Hence all the graffiti inside. There were six other people, three girls and three guys who were completely naked. So that was really weird. But it was honestly the coolest thing I’ve ever done.

I imagine you got to know each other quite well that day!

Kadri Vahersalu: It was easy to work with them because they were so professional. It was just like they didn’t give a fuck about how they were or what they were doing, and I was like, ‘You guys are amazing!’ In a way they inspired me a lot because I’m so shy and so closed. They’re just awesome.

Was that the weirdest shoot you’ve done?

Kadri Vahersalu: I’ve done stupid stuff, that’s for sure. When I was in Japan I did the worst shoot in the whole world. I had to run around a field and I had straw in my mouth and I had to act like I was a bumblebee. With the straw in my mouth. And they were like, ‘Run around, act like a bee.’ And I was like, ‘Okay, I’m going to fly away now…!’

Do you feel now is a good time to be model? Is the industry is more open and positive at the moment, and more inclusive?

Kadri Vahersalu: Yes, I feel like they’re all really friendly and really open if you have social media. But if you don’t have it... I don’t do it anymore. I stopped because I wouldn’t want to get booked on the basis of how many followers I have. It was just a bit sad. I mean it’s great if you want to sell stuff!

I guess your personal life shouldn’t be, and isn’t, the product.

Kadri Vahersalu: It’s not only models, but also pop stars. It’s like Justin Bieber – he just wants to sing and do his stuff, and he’s not interested in 10,000 girls screaming at him, he doesn’t want that.

Kadri Vahersalu: I like his music a lot. I like the way he’s changed. It’s really sad that he’s always seen in that light. I feel like that could be one of the reasons he had that meltdown. But when I look at him now, I’m like, wow!

“They thought I was an alien! I was never teased really badly but they’d just make a joke like ‘Uh, you’re an alien.’ And I was like, ‘Thanks… how did you know?!’” – Kadri Vahersalu

I know you were in Raf Simons' final Dior show. How was that?

Kadri Vahersalu: Well I didn’t know about that being the last. I think no-one knew, but when I found out from my agent, I started to cry. I love him so much. I love what he does and I love that he’s very humble. And in that movie, he was like, ‘I don’t want anyone to take pictures of me’, and sometimes I feel the same way. If I’m at a shoot it’s ok, backstage it’s ok, but coming out of the show, it’s just – why?

In that documentary when they’re saying he has to go on the front of Paris Match he says ‘Why?’ – it’s quite striking when nobody has a real reason, other than tradition.

Kadri Vahersalu: I think he has a very good way of keeping his private life to himself. He’s a great example of, ‘I’m doing my job but I also have a private life’.

That’s so true. I also really liked the Gucci video you appeared in, the dancing one. I was watching it the other day and thinking there’s a lot of awkward dancing around these days, it’s such a trend.

Kadri Vahersalu: It was so much fun. It’s such a simple idea, but to make it look so great. And to make it look real! You could tell like all of us were actually having fun, not like ‘Ugh, gotta dance again.’ It was literally pure fun.

Did you ever get bullied because of your amazing eyes?

Kadri Vahersalu: They thought I was an alien! I was never teased really badly but they’d just make a joke like ‘Uh, you’re an alien.’ And I was like ‘Thanks… how did you know?’