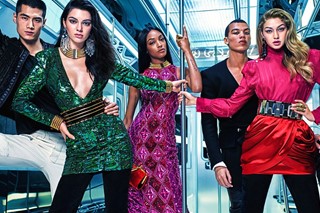 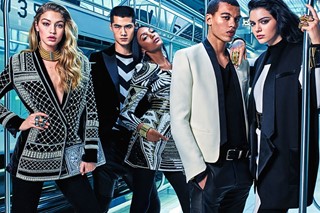 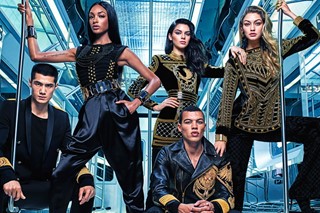 Dazed 100 designer Olivier Rousteing has often stressed the utility of pop culture in communicating to a mass audience. “I want to communicate my vision to people,” he told us earlier this year. “And nothing better than pop to communicate with, you know?” Nothing illustrated this philosophy more than last night’s Balmain x H&M show, which featured a surprise appearance from 90s boy band Backstreet Boys.

Maintaining his reputation as a designer for the people, Rousteing enlisted Nick, Kevin, Brian, A.J., and Howie to perform some of their classic hits including “Everybody”, “Larger than Life” and “I Want it That Way”, at the New York show.

The boys were joined by members of the #BalmainArmy who were also marked by their affiliations to pop culture: former Dazed cover star Kendall Jenner and Gigi Hadid, supermodels Jourdan Dunn and Karlie Kloss, Instagram It-boy Jordan Barrett and Dudley O'Shaughnessy – the model and star of Rihanna’s “We Found Love” music video.

But the 90s nostalgia didn’t end with Backstreet Boys, the collection’s campaign video also bowed to the decade, featuring Jenner and a group of dancers taking a ride on a futuristic-looking subway and performing a choreographed routine.

The collection itself drops in H&M stores on November 5 and bears the codes that create Balmain – heavy embellishment, high-octane glamour and a sense of empowered femininity. “What is Balmain is what is me,” the designer said at the press conference prior to the show – and what is Rousteing but a fan of pop, glamour and fun?